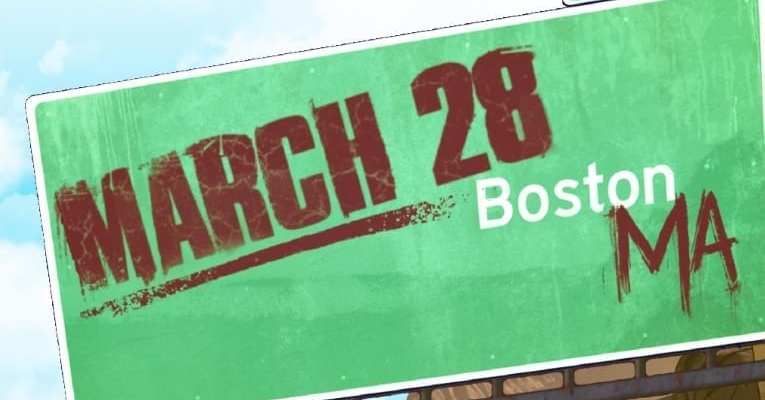 Well, if it isn’t about damn time. After years of fans demanding information about Borderlands 3, developer Gearbox looks to be about ready to lift the veil. In a recent teaser posted to Twitter, it appears the first details for Borderlands 3 will be shown during PAX East.

The tease came as a Tweet from the Gearbox Twitter account. It shows a road sign with “MARCH 28” and “Boston MA” across the front. The sign and surrounding desert landscape are all done in the familiar cel-shaded, comic book style used by the series. Of course, it’s also in a desert. Gearbox loves its desert motif in Borderlands. We should also note the part that reads “EXIT 3,” which is about as subtle as Mr. Torgue in a monastery.

YOU’RE IN THE TORGUE ZONE, BABY

The date itself lines up with PAX East, which begins March 28 in Boston. According to the PAX schedule, Gearbox will have a Main Theater Show on Thursday from 2 PM to 3 PM EST. The description promises the team “will have never-before-seen reveals, exclusives, and surprises.” We’re guessing we know what kind of surprise is in store (hint: scroll up).

It’s been quite some time since we scoured the arid landscape of Pandora. The excellent Borderlands 2 launched way back in 2012, the year some people thought was the end of the world. Well, it wasn’t. And it’s a good thing, because Borderlands 3 looks to finally be on the way. Since then, gamers have only been able to scratch their loot-hoarding itch with Telltale’s Tales from the Borderlands, which was good. But it didn’t have much loot, or really any hoarding to speak of.

While the wait has been a long one, at least we now have an idea when we can get a glimpse of the third game. We’ll have more when Gearbox takes the stage on March 28.

Thorn Is Back In Destiny 2, Here’s How To Get It