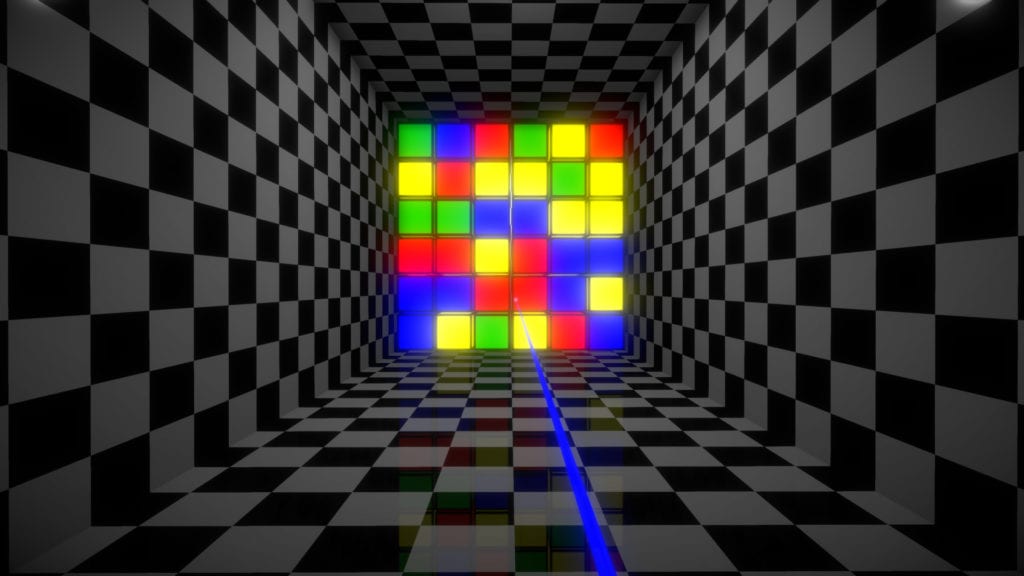 Everyone loves a good Tetris-like game and when you add that addictive type of gameplay to VR you get Boxed In from Red Chain Games. This indie release has been something I have been meaning to try since it appeared in December so this weekend it was time to match some coloured blocks and stop an advancing wall from crushing me.

Boxed In comes with two game modes, Survival and Solitaire. In Solitaire players stand inside a room and eliminate coloured blocks by placing them next to each other in a row of three of the same colour.  The other game mode, which can be considered the real game mode, is Survival and that’s the real challenge.

The player utilises both controllers, the right hand is a gun with a coloured beam and the left hand is used to teleport around the room. The beam on the right gun allows players to change the colour of blocks that appear in the room in order to create a chain of at least three same coloured blocks in a line or a square of four. When blocks match, they are removed from the room freeing up more space for the player to move about the room. 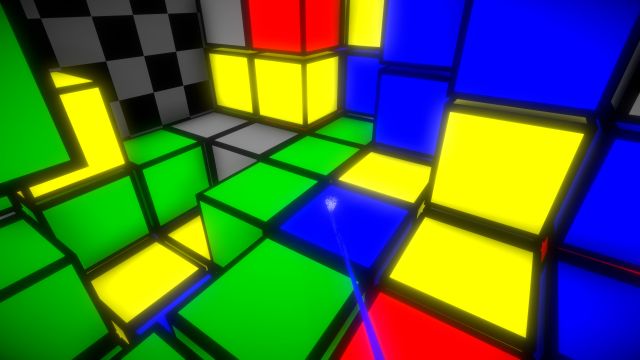 As well as being able to change the colour of the blocks depending on what colour the beam is on the right-hand gun, they can also be moved with a push using the right controller. This allows the player to join blocks together that may have become isolated as other blocks have been removed. This takes a bit of practice, and in Survival mode, it’s particularly tricky.

The game’s Solitaire mode is the easiest and least stressful mode in the game. There are no advancing blocks, you simply need to clear blocks by chaining the coloured blocks together. It’s more of a practice mode than anything else but it does help you get to grips with the controllers and mechanics.

Once the controls are mastered, which involves changing block colours, moving blocks and teleporting around the room, the real challenge begins with Survival. Starting at one end of the room, an advancing wall of random coloured blocks appears. The objective is to stop yourself being trapped in the room by the blocks by eliminating blocks. Matching the colours and removing the blocks frees up more space in the room as more and more blocks appear filling the room. It’s effectively three dimensional Tetris and you’re literally at the heart of the action.

It’s inevitable you will fail eventually but it’s quite a tense experience as you try and figure out where to aim the beam in order to change block colours and make the right combinations. As it’s a three-dimensional space in which you can move around, it makes the game extremely challenging, and dare I say it, addictive. Wave after wave of failures had me going back for more and then attempting it with more colour options which makes it even harder. 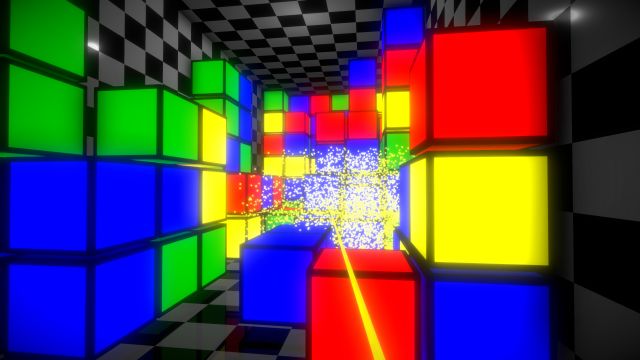 There is a leaderboard so you can see how well you are doing against other players. It took me about an hour of play to make it into third place on the ranking but the top two spots were miles ahead on the scoreboard so it was time to take a break.

Boxed-in is a simple idea that has been well executed. While it may not be the most visually impressive game in VR, it doesn’t need to be. It’s a tried and tested formula that’s always popular with gamers.

I’ve had a thoroughly enjoyable time playing Boxed In but it could do with another game mode of some sort, but at the cheap price of £4.79, it’s well worth the money. Boxed In is challenging and it has me coming back for more to beat my scores. Well worth a look if you have a Vive or Rift.

Twilight Path coming to VR from creators of FORM