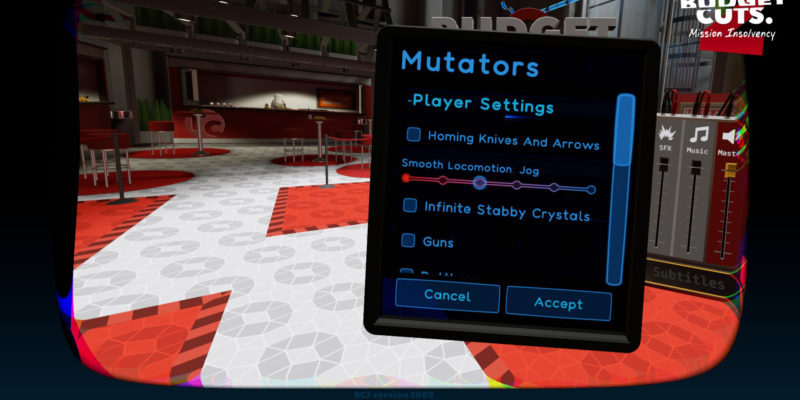 Budget Cuts 2: Mission Insolvency released in December 2019, and our reviewer didn’t think it lived up to its predecessor, Budget Cuts. It may be a disappointing follow-up to one of the most loved VR titles to date, but Neat Corporation and Fast Travel Games have just released the Mutators Update, which will allow players to tune many of the game’s elements to their liking.

What’s new in the Mutators Update?

The Smooth Locomotion mutator allows players to move around in a traditional FPS style. Axelsson also mentioned that the Translocator would still be useful for getting to otherwise unreachable places while using Smooth Locomotion.

There are a bunch of other custom settings you can toy with in the Budget Cuts 2: Mission Insolvency Mutators Update. Homing Knives is an aim assist to help you hit your targets. Bullet Time will slow things down when robots are firing at you and things are exploding. There’s also a Gravity Modifier, which is always an entertaining mechanic to play with.

Fast Travel Games offers a complete list of mutators added to the game.

Hopefully, this is the first step towards redemption for Budget Cuts 2 because the concept of the game is wonderful. In a parody of our attempts to optimize everything, robots take over and decide the earth would be better off if humanity were optimized out of existence. It’s up to you, a menial office worker, to see that doesn’t happen.

For the rest of the week, you can get 15% off Budget Cuts 2: Mission Insolvency for PC via Steam and the Oculus Store. The deal ends on January 26.

Frostpunk: The Last Autumn review – The fall is here