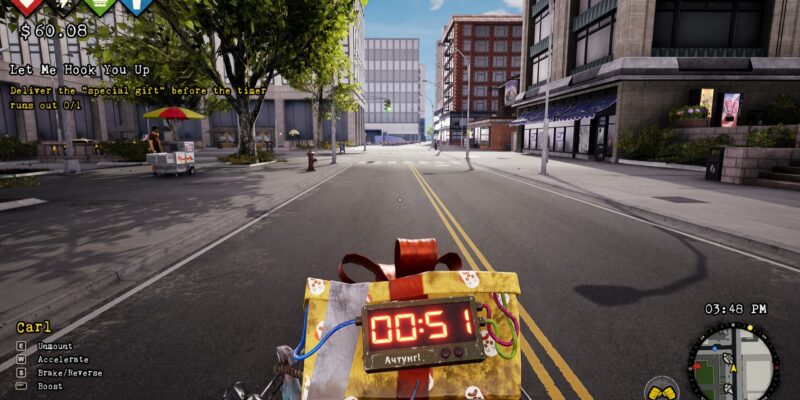 I have to admit it, I rolled my eyes every time I heard about Bum Simulator. Another game with “simulator” slapped on to the title? No thanks. Most games with that word in the title take it literally, often to the detriment of actually having fun. I’m not going to say that this game doesn’t have some of that present, mind you, but it’s also much better than I was expecting. Instead of being a wonky game that tries to actually simulate being a bum, it’s more in the vein of Saints Row or Postal than anything else. The game is entering Early Access as we speak, so the question stands: is Bum Simulator worth it?

Bum Simulator starts with the titular character in an alley with a shopping cart. The shopping cart has googly eyes on it and talks. It also swears frequently. That’s because this shopping cart used to be a man by the name of Carl Cartman, until he was experimented on by the wicked Evilway corporation. That can’t be a coincidence when you consider that this game is published by PlayWay, can it? Carl explains the circumstances the two of you find yourselves in, plus he divulges the information that Evilway also stole half your brain, if you’re curious.

Carl wants to bust into their headquarters and make them turn him back into a human. Oh, and put the other half of your brain back. Can’t forget that. But to do so, you need to be taught in the bum arts from the ground up. As a semi-cogent bum, you can punch, throw pigeons at people, urinate wherever you so choose, and ride around on Carl. Carl doubles as a vehicle and your inventory, and he always follows you around. The city Bum Simulator takes place in isn’t particularly large, but it’s a suitable place for all sorts of carnage. 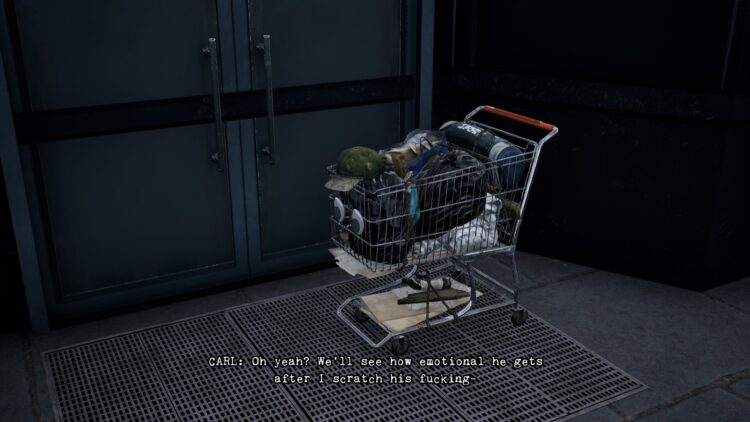 That’s not to say that there aren’t any simulator elements at play. You need to keep your hunger and thirst levels up, lest you suffer the consequences. To do that, you’ll mostly be buying items. So, there are two main ways to make money in Bum Simulator. The more obvious of the two is by panhandling. At any time, you can bust out a sign, scribble whatever you want on it, and then walk around and implore people to give you some cash. It doesn’t take long to be able to afford some food, so keeping those two meters up isn’t much of a problem.

Then there are side missions where you can go do a task for a bored rich guy. He asks you to zip around, accosting a certain number of people within a time limit. If you’re successful, you get $25. What a cheapskate. These tasks require you to do a number of things, such as knock out pedestrians, urinate on people wearing suits, or flipping off cops. You do that by pressing the button for flipping people off, of course. Cops work just like any game since GTA showed up, if they see you doing anything, they chase after you. You’ve got a stamina meter at play here, so you’ll have to make sure you don’t run out of energy while getting away.

On top of all that, the developer didn’t skimp on the gameplay, as Bum Simulator also has gang mechanics. You’re a member of The Creeps, which brings with it a base to defend from your enemies, The Bugs, who will randomly attack it. You can also rescue Creeps from Bug attacks to get respect points, which you can use to have Creeps defend your base from attack. Otherwise, you can go there yourself and knock the crap out of the enemy as you see fit. 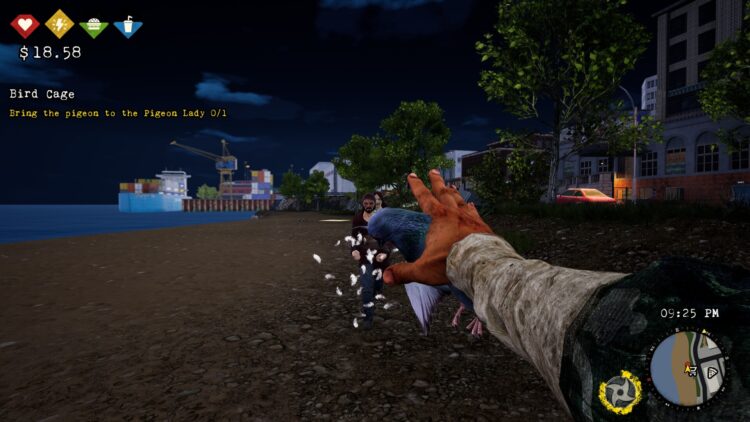 Since you have a base, yes, you can build it up. You’ll find trash piles all over the city that you can search. Any garbage you dig up can be thrown into your inventory and either processed into crafting components such as scrap or wood, or be sold to pawn shops. Naturally, this means that Bum Simulator also has crafting. You can craft repair kits, upgrades for your pigeon coop to improve your pigeon skills, plus craft different things for your bases. That’s right, you can take over Bug bases and have multiple friendly bases to choose from.

Crafting doesn’t stop there, either, as you can also make alcoholic beverages that can be used for attacks. This is known as Alcohol Alchemy. The first recipe you learn is called a Fus-roh-beer and, yes, it’s a Skyrim thing that pushes enemies back. That’s a dated reference, alright. Speaking of dated, Bum Simulator runs better than I was expecting, but it’s also very basic visually. This is fine, because I don’t need a game like this to have cutting-edge graphics. The textures are alright, but everything else looks like it could be the bones of a game made in the late ’00s. 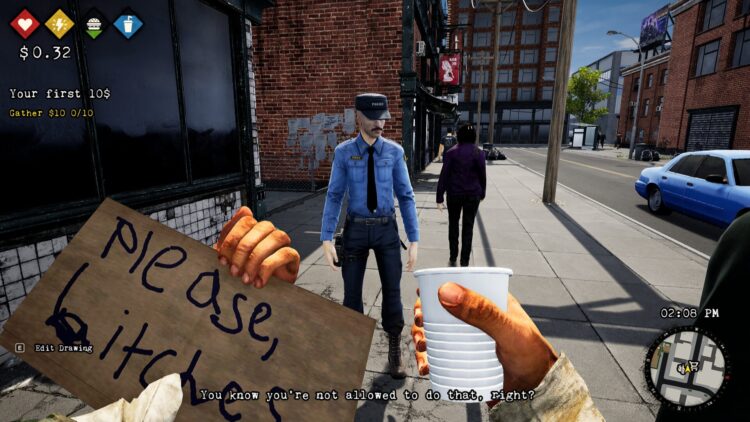 Regardless, I’m having an awful lot of fun with Bum Simulator. You get experience for beating enemies and finishing missions, which grants experience points that are used to purchase perks. There are a lot of these and they greatly increase the bum’s capabilities. I put points into having health and thirst degrade slower, as well as increased stamina and melee damage. I punch regular people out in two hits. The game does a good job of capturing what makes these puerile open-world affairs so entertaining, while also including more depth than need be.

Bum Simulator is set to spend a maximum of a year in Early Access. So far, only the first act is playable, but that brings hours of playtime. The game is honestly rather enjoyable if you’re into this sort of thing, so I do feel that it’s already very much worth a purchase. Not every game lets you go on ridiculous base-building adventures with talking shopping carts, after all. I’m looking forward to seeing how the game moves forward over the next year. Oh, and I want to see other ways pigeons can be used as weapons. That’s pure danger, right there. 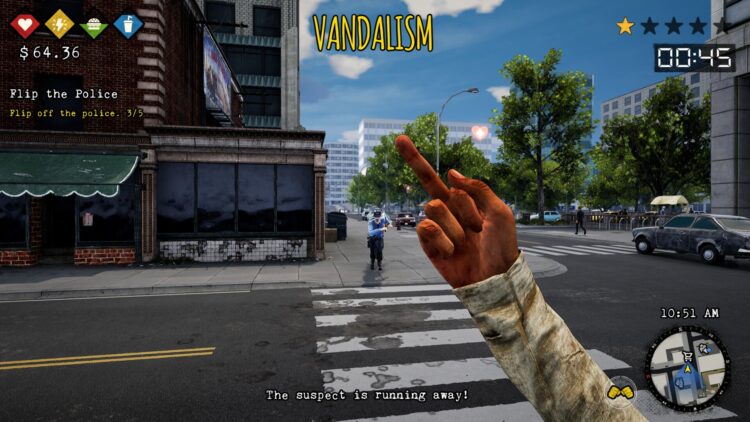