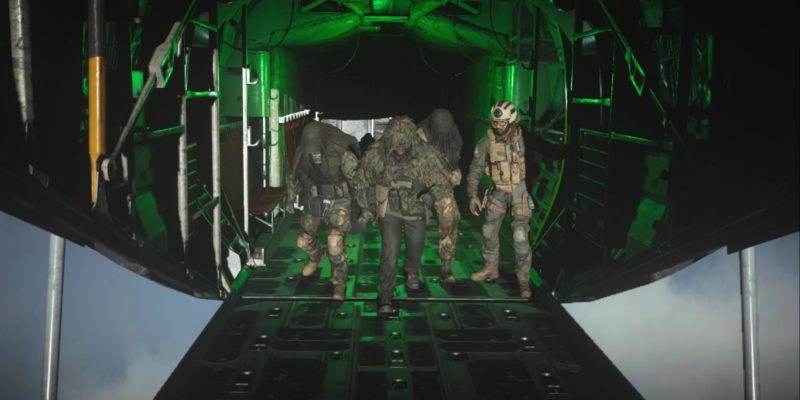 Activision’s fresh battle royale, Call of Duty: Warzone, is here and attracting a ton of new players. Thanks to its free-to-play model, many beginners who have never touched Modern Warfare or even a Call of Duty game are jumping in for the first time. But it can be hard out there on the battlefield to survive, let alone win. However, with these beginner tips we’ve outlined, you’ll be able to officially put an end to those awful short rounds and start eyeing up glamorous victories instead. You’d be surprised how easy it is to go from being an inexperienced player to a very capable one in a matter of hours. 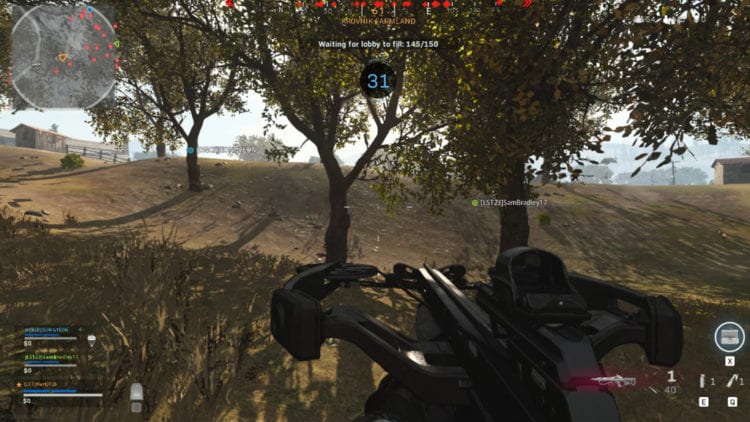 The pre-game lobby is also a great opportunity to learn new weapons. Many newer players may not know that something unusual like a crossbow is even an option.

Just like in Modern Warfare, guns in Warzone need to be leveled up in order to unlock their respective attachments. Leveling up weapons in Warzone itself is tricky as there’s a limited amount of gunfights you’ll be able to take part in. However, the pre-game lobby can offer a free five or six kills, which go toward your attachment progress. Since radar is always on, it’s easy to find other players. So, just follow them around and try to hit your shots.

In Warzone, don’t drop early or directly below where the plane is flying. You can see the plane’s trajectory by viewing the map with M on your keyboard — or the back button for any controller players. You always want to check the map to understand where your best options are to touch down.

The problem with landing close to the plane is that everyone else will have the same idea. This is great if you’re an experienced player who fancies a gunfight — but a disaster for any beginners. Remember, many Warzone players have played hundreds of hours of Modern Warfare already. While it’s technically a different game, the gun mechanics are the same. They have home-court advantage, and challenging that isn’t going to end well. 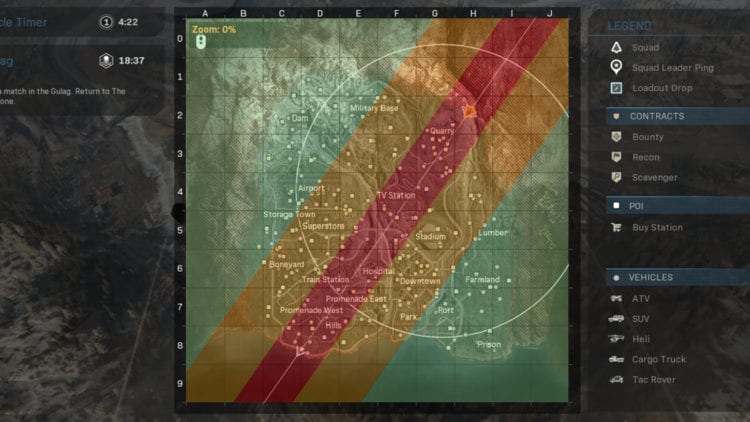 A rough indication of how populated different areas will likely be. Be sure to apply the same mindset to your specific map as the plane’s route changes every game.

The map above is split up into three areas based on player population. Red marks hot zones, orange warm zones, and green the less populated areas. Landing directly below the plane (aka, the red zone) is a no-go for any beginner. Landing in the orange zone can be worthwhile, but you should expect a gunfight or two. Anywhere in the green zone will likely be either uncontested or only involve, at most, one team fight.

Taking long flights away from the hot zones will drastically increase your likelihood of making the top 50. It’ll also give you time to see what kinds of weapons and equipment can be looted without the pressure of being shot at. Finally, the areas right below where the plane starts and all the way near the end will be very hot. Expect several gunfights if you drop there.

Play at your own pace

Do not fall into the trap of trying to replicate your favorite YouTuber’s amazing plays. Watching Faze Testy run around destroying everyone in sight might be entertaining, but it isn’t practical for a beginner. Of course, if you enjoy a faster-paced game regardless, go for it. But just be aware it isn’t your only option. Camp if you must. 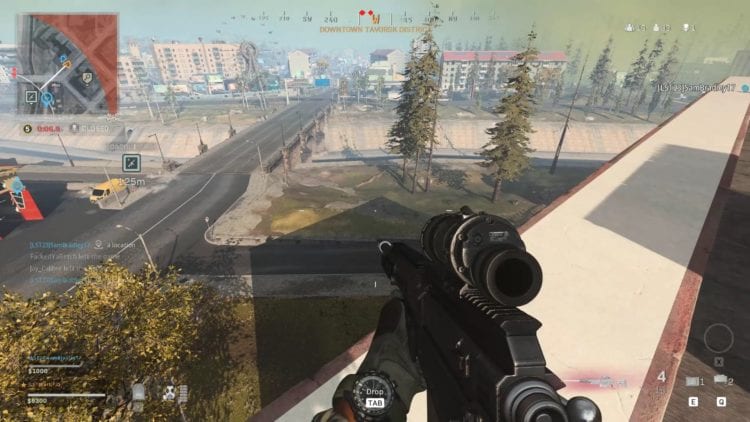 Behold the art of camping on a rooftop with a sniper.

In other battle royales, the priority is usually securing the best weapons as quickly as possible off the ground when starting. In Warzone, this doesn’t really matter. Outside of the first five minutes or so, you probably won’t need to rely on spawned weapons; you should attempt to purchase a loadout.

Loadouts are extremely advantageous. Regardless of if you’re a Warzone veteran or a beginner just starting out, the value that loadouts provide is too good to miss out on. Not only do you get to use your own fully customized guns, but you also get access to perks. Some of Warzone‘s perks are crazy strong, like High Alert, which will cause your screen to flash whenever you are being aimed at. This is a hard counter to snipers and anyone trying to pick you off from the shadows. 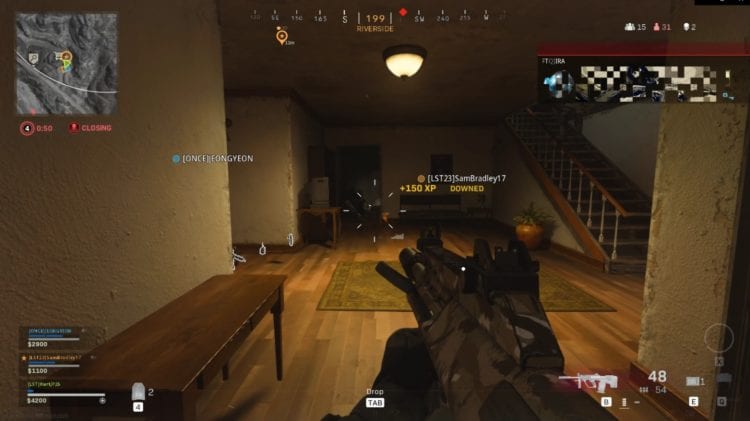 Loadouts give you so much utility. Here I’m running a 60-mag AUG, heartbeat sensor, claymores, and a secondary thermal sniper.

Buying a loadout costs a somewhat steep $6,000, but money can be shared between all of your teammates. You can also drop money for your teammates — pressing Tab or down on the D-pad — in order to pool your funds together to get a loadout quicker.

As for what loadout you should be using, that’s a huge topic for another day. The general rule though is that snipers, LMGs, and assault rifles are all relatively strong. Regarding perks, I’d recommend some combination of Cold Blooded, Double Time, Ghost, High Alert, Overkill, Tracker, and Tune-Up. Feel free to tweak and adjust your setup based on your play style and preferences.

It’s nothing new that headshots matter in a first-person shooter. From CS:GO to Overwatch to Rainbow Six Siege, headshots have always mattered. However, what you probably don’t know is just how much they matter and how easy they are to hit, even for a beginner.

In both Call of Duty: Warzone and Modern Warfare, your headshot multiplier will vary greatly depending on your gun. In most previous Call of Duty games, headshots only gave a 1.1x damage multiplier, making them widely negligible. Yet in both Warzone and Modern Warfare, this multiplier is increased from anywhere from 1.3x all the way up to 2x. Generally speaking, most full-auto guns fall somewhere near 1.3x, while snipers and DMRs usually sit between 1.6x and 2x. 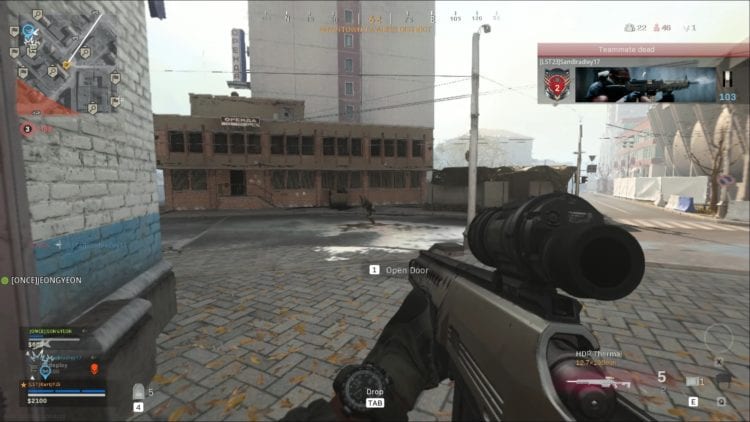 This matters a lot for a DMR like the Kar98k. Thanks to its incredible headshot multiplier, it will always kill in one shot to the head at all ranges. The same can be said for the Dragunov, HDR, and AX-50.

Even if you’re not using a DMR or sniper, it’s still worth aiming high. As an example, let’s look at the ever-popular M4A1. Its base damage of 28 means it takes nine shots to kill a fully armored enemy. If you landed all headshots, this would drop to just six shots instead. Given the gun’s low recoil, even a beginner can land consistent headshots with a little practice. Cutting your time to kill down 33% could easily be the difference between winning a team fight and losing it.

Use this Call of Duty: Warzone beginner guide to start netting more kills today, and come back to PC Invasion for more Warzone guides.