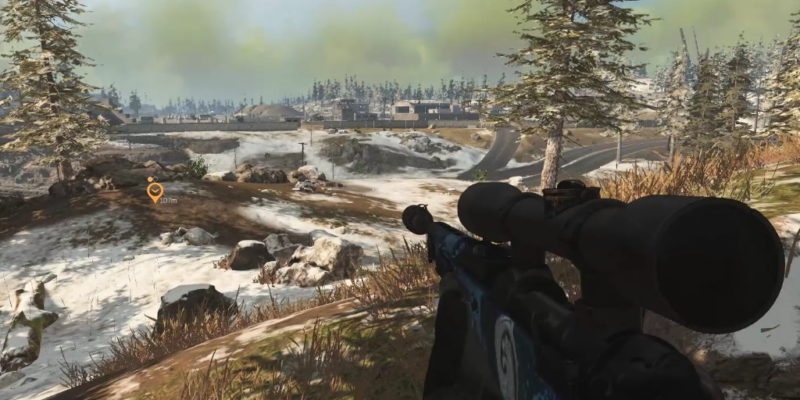 When building a suitable loadout for Warzone it can be difficult to decide what gun to use. After all, the new Call of Duty features 34 different primary guns for you to choose from. Although all of them are relatively capable, there are definitely some that will give you that much-needed edge in winning gunfights.

Warzone tends to favor specialist weapons over versatile all-rounders. For instance, long-range LMGs and snipers tend to outperform ARs while, at short range, shotguns tend to outperform SMGs. There are exceptions to this rule, but you’ll want to keep this in mind when choosing your go-to weapon. Finally, feel free to copy the setups I use as they are mostly the optimal build for each gun. 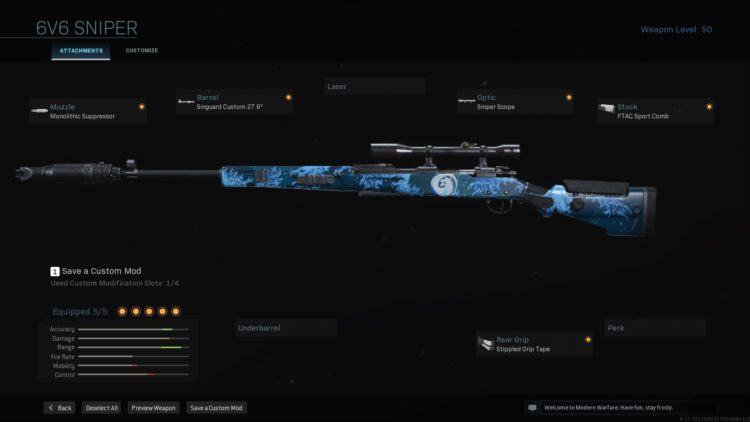 Many Warzone players tend to opt for the big boy snipers when picking a primary long-range gun. While it is easier to hit shots with either the HDR or AX-50, I think the Kar98k outclasses both of them. Thanks to its superior handling and excellent aim-down-sights (ADS) time, the Kar98k is surprisingly good for mid-range duels, assuming you have the aim. This means if you get caught out by a rushing SMG or AR player, you still have a decent opportunity to land that headshot and win the fight.

Unfortunately, the Kar98k is not gifted with incredible range. I do not recommend challenging other snipers in long-range duels unless you are very confident in your abilities. An HDR user will have a far easier time at securing a long-distance kill. This is because the Kar98k suffers from substantial bullet drop and consistently predicting your shot’s trajectory can be difficult. 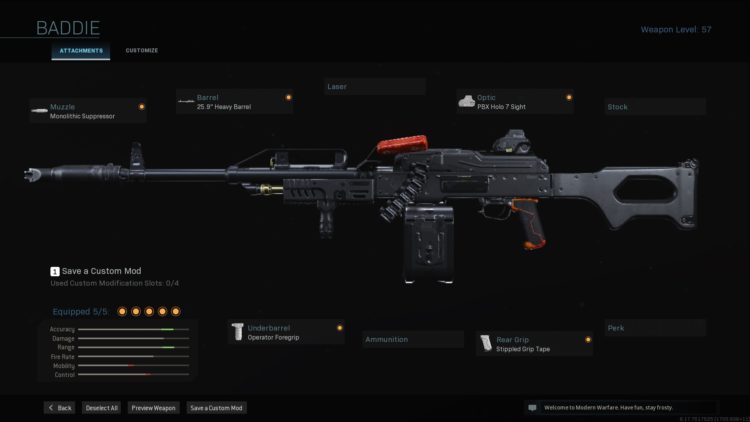 As far as I’m concerned, the PKM is the best gun in Warzone. If you attach both the Monolithic Suppressor and 25.9″ Heavy Barrel, it won’t suffer from any damage falloff until 50m. At that range, it will three-shot anyone without armor, and seven-shot anyone with full armor. This results in a very competitive time to kill that’s comparable to the best assault rifles, while also out-ranging most of them.

As it is a light machine gun, you get access to a fantastic stock 100-round magazine, with the option to upgrade to either 150 or 200. I’d recommend the 150-round magazine as it doesn’t give an aim down sights penalty despite the description claiming it does. In contrast, the 200-round magazine will add just short of 40ms to your ADS time. As the PKM has fairly poor handling to begin with, the last thing you want is to make it even worse. Although upgrading the magazine in the first place isn’t overly necessary. 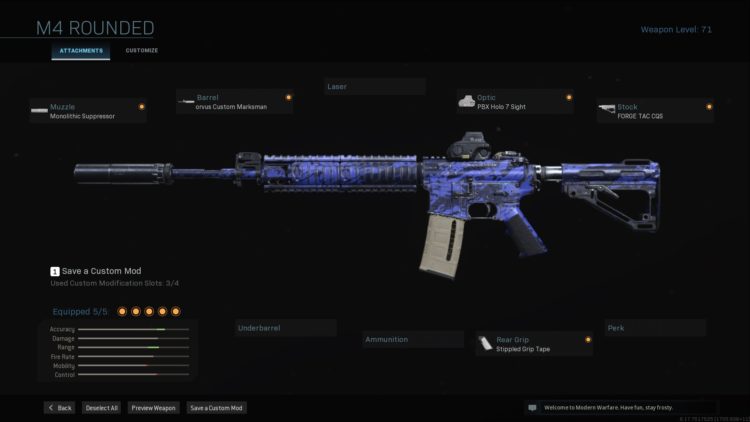 What’s bizarre about the M4A1 is that it’s supposed to be a jack-of-all-trades assault rifle, and yet it excels at just about everything. It’s got a great fire rate at 833 rounds-per-minute (RPM), impressive max damage range at up to 41m, and very forgiving recoil. All this adds up to create the easiest-to-use gun in Warzone. It might be outclassed at range by the likes of the Oden and PKM, but you are going to have a far easier time consistently hitting shots.

It’s surprising how strong the M4A1 is in close-range engagements, too. Although it will normally lose to most meta submachine guns, it can still hold its own. Equally, bar maybe the FAMAS, no other assault rifle can compete with it within those first 20m or so. This makes the M4A1 a fantastic versatile choice for players who don’t want to purchase multiple loadouts. 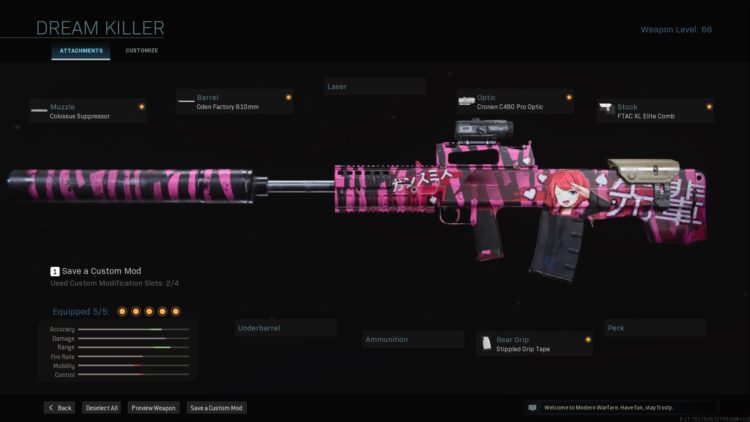 When looking for a go-to DMR, most players opt for either the FAL or EBR-14. These are both solid choices, but in terms of pure range damage, a single-fire toggled Oden is the way to go. When equipped with its signature Colossus Suppressor and 810mm barrel attachments, the Oden has no damage falloff in its first 100m. For an assault rifle, that is insanely good.

This makes the Oden great for picking off enemies at range and even counter-sniping, since snipers will flinch harder than you when shot. I tend to run the Cronen C480 as I’m comfortable with it, but the thermal hybrid can be useful for less experienced players. Just be aware that having a thermal, the Colossus, and the 810mm barrel, your Oden’s handling will be harmed. 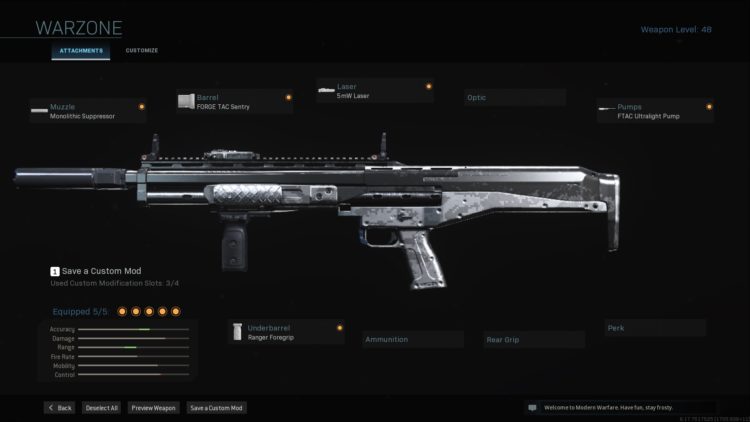 Shotguns can be a little inconsistent in Warzone as they rarely one-shot enemies. With guns at a lower fire rate, like the 725 and Model 680, this results in fights that don’t always lean in your favor. This doesn’t mean shotguns are completely useless, however. You’ll just want to opt for the ones with a good fire rate instead, like the R9-0.

The R9-0 will consistently secure two-shot kills anywhere within its effective range of roughly 10m. It’s difficult to say exactly due to its random pellet spread, but it’s got better range than you might think. Be sure to level up this gun in advance, though, as all shotguns without range-improving attachments are rough to use. Both the Choke and Forge TAC Sentry should be considered must-haves. 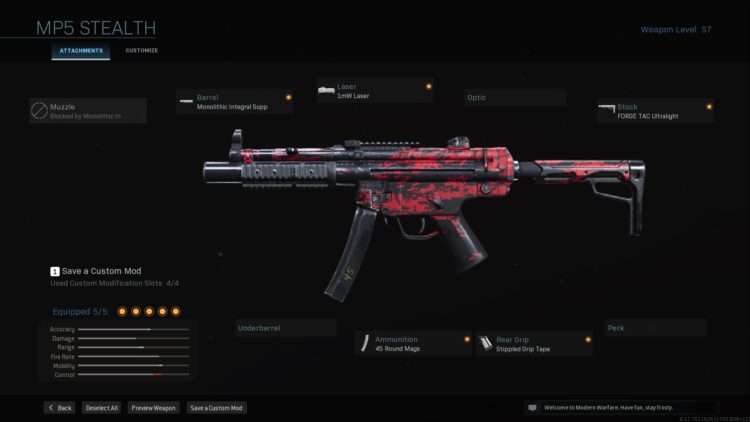 It’s no surprise that the MP5 is a popular choice among many Modern Warfare pros. It has an impressive range for an SMG, managing to maintain a competitive time to kill up to around 25m. Also, its fire rate of 833 RPM is both fast and identical to the equally popular M4A1. This makes switching between these guns feel very natural. Speaking of the M4A1, the MP5 shares its versatility as a gun that can slot into almost any role.

That is to say that at long range it isn’t great, but it still works. Equally, it’s passable in mid-range fights and far more forgiving than many of Warzone‘s other short-range guns. Given this, I think the MP5 is a great choice for aggressive playstyles where you’ll be pushing teams whenever you get the chance. As it’s not as two-dimensional as the other options on the list; you still have a chance at winning if someone engages you from a distance. However, be aware that the MP5 will get outgunned by shotguns inside of most buildings, especially the R9-0 and Origin-12. 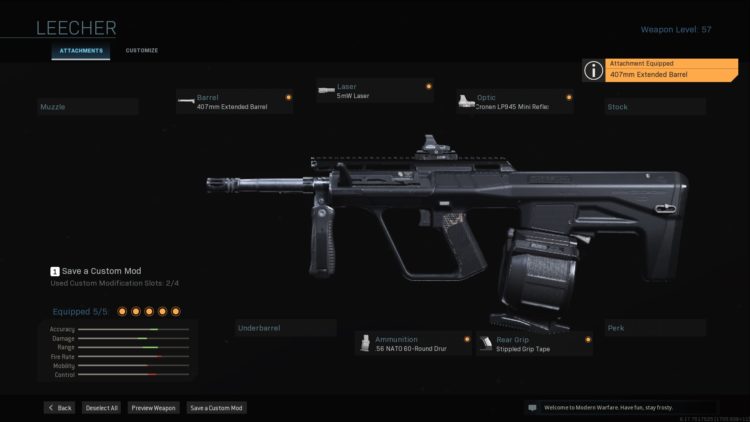 It really feels like the AUG came out of nowhere. I completed the mastery challenge on this SMG early into Modern Warfare‘s life. At the time, hardly anyone used it and would usually opt for the MP5 or MP7 instead. But a few nerfs and buffs later and it’s now a seriously competitive gun benefiting from having tons of useful attachments. That is to say that while most submachine guns are stuck being what they are, the AUG can be kitted into anything from a point blank run-and-gun weapon all the way up to a beefy LMG.

Without a doubt, its unique selling points is its signature 5.56 NATO 60-Round Drums. This gives you suppressing fire comparable to the PP-19 Bizon, and it also makes it far easier to take on multiple enemies at once. There’s nothing worse than beginning a gunfight and losing because you had to reload. It’s nice too, because even with this chunky magazine, you still get access to the AUG’s relatively fast reload speed at just 1.6 seconds. 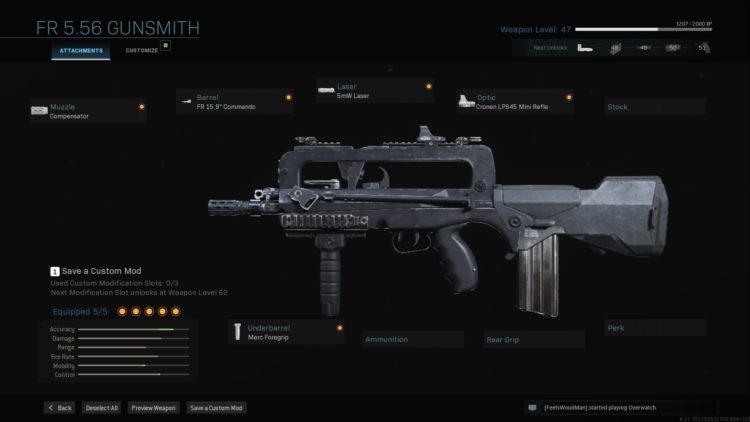 This might be somewhat of a surprise suggestion, but the Famas is better than many give it credit for. Up until around 30m, the Famas maintains a reliable one-burst kill without armor or two-burst kill through armor. Even after taking its burst delay into account, the Famas has an effective fire rate of around 750 RPM, but its fire rate without the burst delay is 1000 RPM. This means that within a single burst, the Famas delivers one of the fastest times to kill in the entirety of Warzone.

When kitting your FR 5.56, do not make the mistake many others often do. This is not a good long-range weapon. Just because you’ve thrown on a sniper barrel and a huge scope doesn’t mean you’ll be counter-sniping effectively anytime soon. Its burst recoil makes hitting long-ranged shots very difficult, and its falloff range means it struggles in single fire against any other sniper, DMR, or assault rifle built for distance. Improve its handling, put on a nice optic, and focus on landing that entire burst instead.

For more Warzone tips and guides, be sure to hit up our guides and features hub.