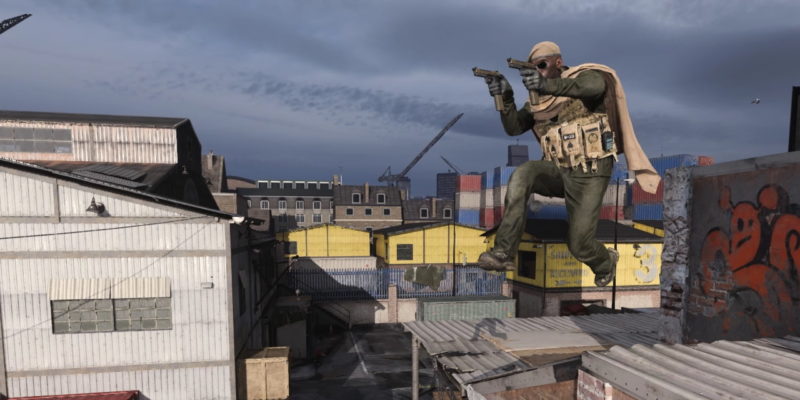 With all the untraversable rocks and cliffs in Call of Duty: Warzone, it can be frustrating to get about. There are even some final zones that will cut you off entirely if you don’t predict and move in advance. Simply, not knowing the map and what the various parkour spots are will more often than not get you killed.

Across Verdansk there is a large range of useful jump and mantle spots that can help you get to unusual areas. These are particularly strong as most players won’t think to scout them in advance. This guide should help you learn some previously unknown spots and make sure you don’t get screwed over by an unforgiving final zone again.

Climbing up the Dam

The first spot in Call of Duty: Warzone we’re going to focus on is the Dam and climbing up it. The dam is an evil part of Verdansk where final zones tend to either be in the middle of nowhere or up a huge hill. If you’ve ever tried climbing up the rocks around here you’ll know how annoying they can be. There’s usually only one regular way up the hill, and it’s a very predictable road that teams will inevitably be pre-aiming.

But what if instead of following the road system, you just parkoured directly up the dam itself? Turns out that’s perfectly feasible. All you have to do is go to the right side of the Dam, climb the ladder onto the nearby building, and then sprint up the side of the Dam. Once at the top you can either use it as a great sightline over the map or continue on to climb some rocks to reach the peak.

Once up there, you may notice a general lack of useful cover. There aren’t too many buildings, and in the bright white snow, you’re likely to stick out and get spotted. However, there’s a nearby tunnel system that, whilst useful for driving vehicles through, provides some very nice high ground.

Go to the spot highlighted in the video. Then jump on the nearby barrier on the left and leap onto the side of the tunnel. From here you just want to run and jump at the middle of the rocks until the game lets you mantle up. Be sure to spam your jump button as to not miss the mantle window. This spot is particularly useful as one of Call of Duty: Warzone‘s final zones takes place directly underneath next to the tunnel. You can also climb over the tunnel from the eastern side by jumping on the portable toilet near the cliff side.

Many of Downtown’s rooftops can be incredibly difficult to push as they are designed around one-way-in systems. Teams will usually hear you coming, hard-aim the only door, and place tons of equipment facing towards it. Although this stands true for most of the buildings, one of the most popular choices for campers actually provides an alternative parkour-friendly entry point.

This is the building in the north of Downtown, perhaps better known as E flag “Bloc” on Tavorsk District. Assuming there’s a team there, walking through that door will get you killed. By parkouring through the window you can create a more favorable gunfight by taking a less predictable angle. This is also a great spot for throwing C4 over the top since you know they’ll likely be standing next to the door.

This is less a flanking option and more a route for those that want to camp and hide in Call of Duty: Warzone. It may be frowned upon, but sometimes taking things slow can be the best way to win a game of Warzone. For clarity, I happened to do this in the pre-game lobby for convenience, but it’s perfectly feasible in a regular game.

Make your way south of Superstore to a nearby office complex. Once there, get to the roof by climbing the stairs and head to the north side of the building. From here you can parachute off and parkour into one of the many outstretching balconies. Since the doors on the balconies are not openable, you can sit here and, assuming you have Ghost, be effectively impossible to find. Hardly anyone remembers to scout this spot, so it’s great for catching any nearby enemies off guard.

This one is a little different from the others, but it’s still equally useful. Across the Call of Duty: Warzone map are several communication towers that, with some accurate parachuting, players can land on top of. Once on top, you can either hide at its peak or parkour down on the platform below. These platforms make for fantastic sniper towers as very few players bother checking them for enemies.

I like this tower west of Boneyard the most as it offers unmatched levels of vision over the majority of western Verdansk. There are also similar towers located south of the TV Station, northwest of the Hospital, south of Park, and between Quarry and Stadium. I don’t recommend using the ladder as it leaves you very exposed without a good escape route. Only navigate to this spot by parachuting in either out of a helicopter or when you spawn in.