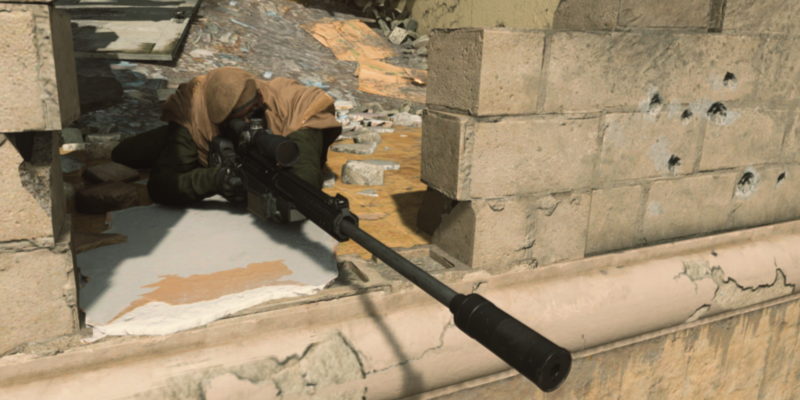 In Call of Duty: Warzone, there are three sniper rifles and five designated marksman rifles. Having eight different choices to pick from can make the task of creating the right sniper rifle for you rather difficult. After all, even after you’ve picked a gun, you then have to figure out the optimal attachments and build. It’s an awful lot to take in for a new player.

Fortunately, we’re here to help. We’ve max-leveled all eight options and given them in-depth tests across both Warzone and Modern Warfare to draw up some conclusions. However, most of this testing was done with mouse and keyboard, so these findings may not be as applicable for controller players. Also, I’m not a huge thermal fan, so sniper build recommendations will not feature a thermal optic.

These aren’t even sniper rifles

First things first, not all of your eight options actually qualify as legitimate sniper rifles. Specifically, I won’t be breaking down the MK2 Carbine and Crossbow. Both of these are niche weapons that are far more suited to close-quarters precision combat. Neither has much use at long range and is greatly outclassed by the other options in this regard. Nonetheless, the explosive bolt-tipped crossbow does one-shot and is a good option for opening up engagements. It’s also incredibly fulfilling to hit hundreds of meters away. Just don’t expect to do it often.

Before Season 3, the only semi-auto DMR in the game was the EBR-14. However, this season has seen the new German SKS carbine added, and as with most new guns, its power creep is evident. Simply, there is no current reason to use the EBR-14 over the SKS in either Warzone or Modern Warfare.

The EBR-14 had its moment in the spotlight when it was discovered that one of its variants was bugged. The Line Breaker blueprint allowed the EBR-14 to one-shot to the head at all ranges despite the regular gun always being a 2-3-shot kill. However, since patch 1.19 fixed this, it has since crawled back into its cave of mediocrity. 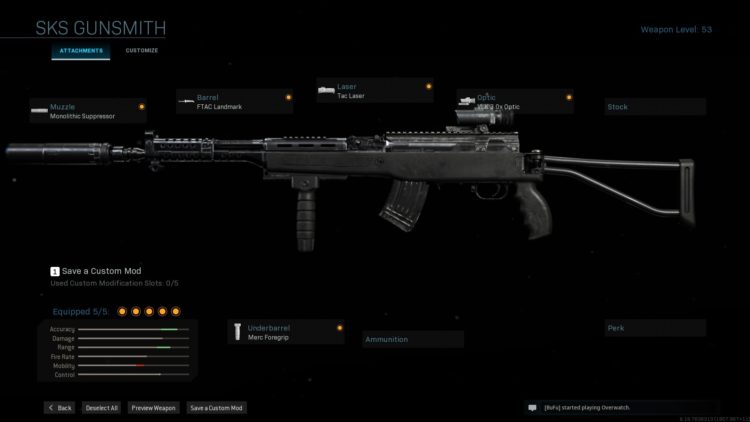 If you are going to run a semi-auto DMR, I recommend something versatile like this that allows you to pressure at long range but still out-gun any enemies in close quarters.

In contrast, the SKS is one of the strongest primary weapons in regular multiplayer. Thanks to its great handling, respectable range, and one-shot-kill potential, the SKS is everything the EBR-14 was supposed to be. Despite this, I don’t recommend running the SKS in Warzone, at least not as a sniper rifle.

Just like the EBR-14, the SKS cannot one-shot in Warzone. This means its a sub-par engagement weapon as the enemy will always have time to react before you fire your second shot. But that doesn’t mean the SKS is useless. Instead, I’d recommend running it as a FAL-like medium-ranged assault rifle and focus on hitting your target’s upper chest and head. If you can land these shots, the SKS delivers one of the best times to kill in Warzone.

When choosing a sniper rifle, a lot of players overlook the Kar98k and the Dragunov. They aren’t overly popular because they both have clear weaknesses that are difficult to play around. First, they suffer from lackluster bullet velocity. This makes hitting targets far away consistently very difficult. Second, the Dragunov, much like the semi-auto DMRs, cannot one-shot despite being a sniper rifle.

This leaves both guns in an awkward position, but I don’t think they’re completely useless. For one, the Kar98k has incredible handling that makes it surprisingly dangerous at both medium and close range. Obviously, this requires exceptional aim, but if you can hit those crazy flick shots, the Kar98k’s time to kill is unparalleled. 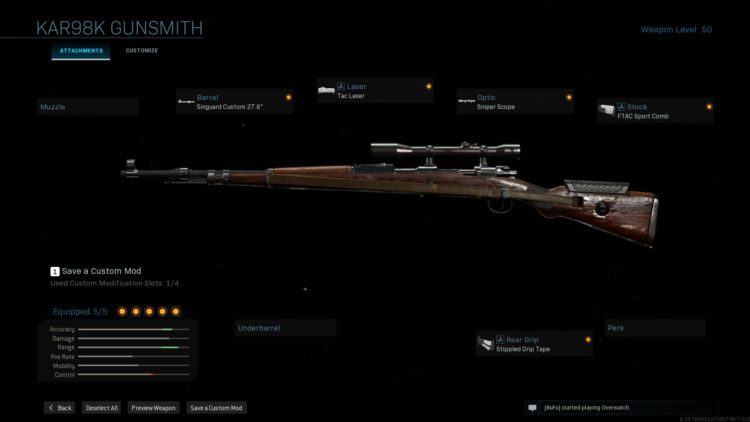 This is a more long-range build, but thanks to the Tac Laser it does still ADS fast enough to be used at close or mid-range too.

As for the Dragunov, it suffers from below-average sniper rifle handling. You would think with its being the less powerful semi-auto choice in class that Infinity Ward would have given it far better ADS and weapon swap speed, but this just isn’t the case. In fact, the Dragunov’s default ADS time of 534 ms is only marginally faster than that of the AX-50, and its weapon swap time of 751 ms is the slowest in class. This can leave you vulnerable in any situation where swapping to a more all-purpose weapon is required.

For most players, these are the two snipers you’ll want to be using. The AX-50 and the anti-material HDR are your hard-hitting, long-range sniper rifles. These specialize in getting picks from hundreds of meters away and punishing unaware enemies. Of course, this comes at the cost of heavy weapon handling and an unforgiving time to kill if you miss that crucial first shot.

An interesting aspect of both of these snipers that many players probably don’t know is that they actually output identical damage profiles. Both will deliver precisely 250 damage to the head in Warzone and a relatively consistent two-shot kill to the upper chest. However, once you start hitting either the lower torso or limbs, your time to kill will become painfully uncompetitive. Similarly, to finish off a downed target in one shot, a headshot is required.

The AX-50’s specialty is its handling when built properly. This is due to its access to several ADS-cutting attachments such as the Tac Laser, Singuard Arms Assassin stock, 17.0″ Factory Barrel, and Stippled Grip Tape. When all of these are equipped at the same time, the AX-50 has an incredible ADS time of just 339 ms. That’s comparable to the sniper rifles of older Call of Duty titles. 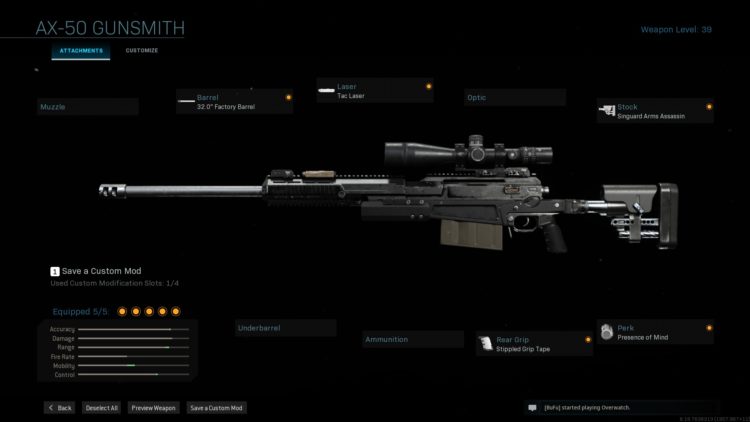 This great ADS potential does come at a cost. The AX-50’s bullet velocity is relatively slow when compared to that of the HDR. This means that when hitting targets at a distance, you will have to account for bullet travel and dip. This can make headshotting targets hundreds of meters away pretty difficult, even for a highly skilled player. For this reason, I would generally only opt for the AX-50 in regular multiplayer and Ground War. However, if you are confident in your mechanics, it can work as an alternative to the otherwise Kar98k-centric aggressive play style.

If you are looking for a traditional heavy-hitting sniper rifle, the HDR should be your go-to pick. Unlike the AX-50, the HDR only gets access to two ADS-improving attachments. When combined, the FTAC Stalker-Scout stock and Tac Laser reduce its ADS speed by 149ms. This brings its theoretical ADS time with a standard sniper scope down to a respectable 465 ms.

However, most players are going to want to run the 26.9″ HDR Pro barrel. This is one of the best attachments in the entirety of Warzone as it effectively turns your HDR into a hitscan sniper rifle. When using this barrel, you won’t have to compensate for bullet drop at all, and its bullet travel speed is unmatched. 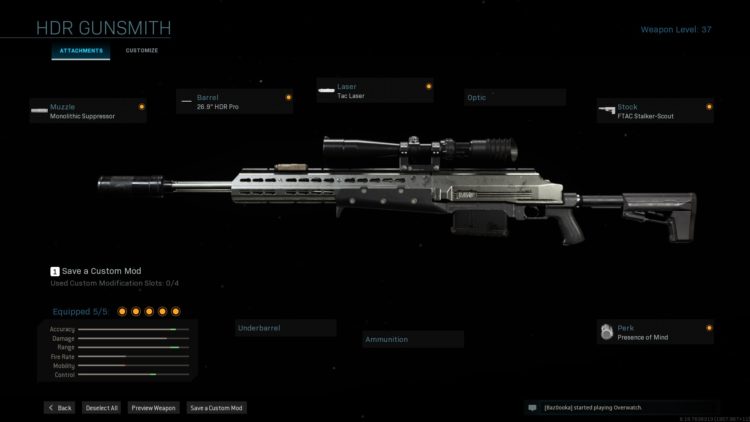 Consider switching out the Presence of Mind perk for a thermal optic if you value the scouting potential.

Once you throw this and a Monolithic Suppressor on, you can expect your ADS time to be crippled down to 616 ms. If you want to add a thermal dual power scope to that, which I tend to avoid, you’re looking at a painfully slow 700 ms to fully scope in. For me, that’s just too slow, but there is an argument for the scouting power a thermal sight can provide. Despite these drawbacks, the HDR’s sheer ability to kill at long range is too good to pass up.