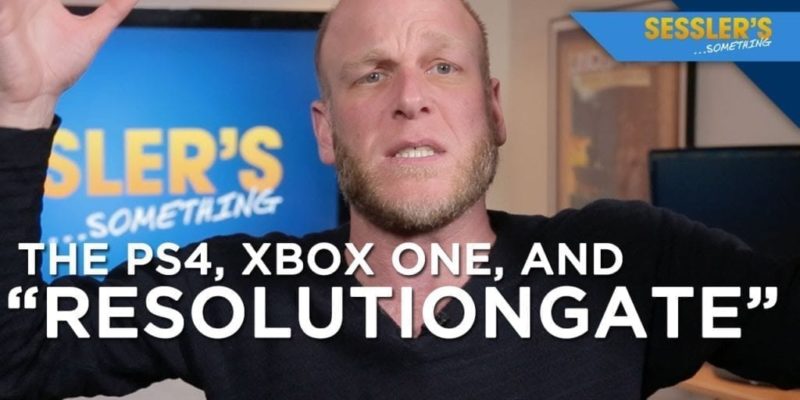 I’ll just come right out and say it: gameplay trumps graphics every time. It’s always the games that define the console.

Since when have visuals and graphics not mattered? It would be wonderful if we lived in a gaming utopia, one where innovations in gameplay akin to the indie offerings were all we needed, but that’s simply not reality. In fact, it’s naive and downright wrong to state or believe that visuals aren’t a defining factor in video games.

Lately, it seems that a lot of the gaming press has tried very hard to quell or underplay any notion of the PlayStation 4 performing above the Xbox One, typically through criticism regarding resolution, frames per second, anti-aliasing, or anything else that could be used to break down the makeup of all this prettiness we see in games. Why?

The past tells us that this has always been the story; generational console differences have been played up in all their glory by various sources. The PlayStation 3 was panned or, worse yet, completely eviscerated when compared to its competition. Knocked in reviews for anything from frame rate issues to pointing out the PlayStation 3’s price tag, the XBOX 360’s better performance in multi-platform games was championed as a selling point and a pro to owning the console. Now, those exact same voices report this being a small or even a non-existent issue. Why the change?

The PlayStation 4 is an objectively more powerful console out of the box than the XBOX One. Where that ends up in a few years time is anyone’s guess, but right now this is coming to bear in comparison with its competitors console at launch. All the next gen multi-platform games run better/at a higher resolution, or both on the PlayStation 4. The technical details as to why are beyond the scope of this piece, but for a really great article on the power differences, here’s Eurogamers breakdown of the situation.

Remember, Microsoft’s marketing and public relations teams have pumped up this conversation as much as anyone. They reported for months that on-paper specs weren’t the entire story and that the truth would be revealed in the games. They maintained this line of thinking in believing they would remain on par with the PlayStation 4, but it’s simply not true in the end.

Adam Sessler, in his latest edition of Sessler’s …Something, alludes to 1080p and 60fps being inflated expectations from the fans and the reported resolution differences between the PlayStation 4 and Xbox One are barely noticeable. Now, this may not matter to you, the reader, and that is perfectly fine. What you enjoy is what you enjoy and you should have the right to play whatever you want on the console of your choice without having to defend it.

“XBOX 360’s better performance in multi-platform games was championed as a selling point and a pro to owning the console. Now, those exact same voices report this being a small or even a non-existent issue. Why the change?”

It’s a fact that resolution differences are noticeable and this proposed notion of fans propping up some ridiculous standard is, in and of itself, ridiculous. If you can say with a straight face that resolution differences are barely noticeable, I question your expertise. PCs have achieved this benchmark for years, so why wouldn’t it be expected of consoles? Sessler stated at SGC earlier this year that next-gen games had BETTER be running at 1080p and 60fps, but that tone has now suddenly changed.

“You see, no one wants to call games journalists out for incorrect and false information due to some fear their dream in joining them will be shattered. Well I am. Stop being apologists and do your jobs”

Resolution and frame rate are integral elements to gameplay and they always have been. The continued glossing over of these visual differences by the media has edged to condemnation of anyone who puts stock into either. It’s backed up by notions that we should be only focused on innovations in gameplay rather than the prettiest game.

My questions are: why is it either or? Shouldn’t it be both? It seems that Sessler is trying to turn the tide of the conversation, all the while refusing to acknowledge that both gameplay innovation and graphical leaps should be the goals in the advent of new console technology. It’s not that Sessler is incorrect; he’s just missing the entire point.

He isn’t the only one doing this, either. A few journalists have continuously touted the word “balance” in regards to the Xbox One’s architecture. Inferring this somehow makes up for the on-paper differences in console power. If games were what ultimately mattered, let them do the talking rather than a regurgitated statement from Microsoft’s PR department. This holds true for Sony and anyone else who’s apt to repeat their marketing slogans as well.

Recently, Ryan McCaffrey of IGN claimed on IGN’s Podcast Unlocked #119 that, even though they had yet to see certain games run on Xbox One’s hardware — namely, Assassin’s Creed IV: Black Flag — it was safe to assume that the games would be identical to the PlayStation 4’s. As recent news and reviews show, this is completely incorrect to assume

These are people paid to discuss video games; they have a platform and (should have) a responsibility towards the truth. There’s catering to the audience and then, there’s outright favouritism. Observations like those cited above are often why gaming journalism receives a bad reputation. Journalists often feel like an extension of a company’s public relations team rather than objective critics and writers.

You see, no one wants to call games journalists out for incorrect and false information due to some fear their dream in joining them will be shattered. Well I am. Stop being apologists and do your jobs. Why downplay obvious graphical differences as trivial in comparison to gameplay innovation when you’re paid to talk about video games and everything in regards to them? The next generation of consoles is the first truly mired in the mud of social media and it’s unfortunately shown the ugly side of gaming fandom. Sadly, It’s not just from the fans, but the people paid to investigate, research, and cover our passion. Tasked with the responsibility of impartiality and objectivity, many are failing in a spectacular fashion.

Games are what matter in the end; great innovations in gameplay and visuals are parts of the equation. We deserve both. Don’t tell me that the PlayStation 4’s advantages for $100 less are not a distinctive selling point or that it somehow doesn’t matter when it always has in the past. Just because you received your console for free doesn’t mean the rest of us should suddenly stop factoring price and power into the purchase.

Still, there is much more going on inside these machines than games. Media capabilities, pricing models, online infrastructures, social media sharing etc. I wanted to mention these as information that should play into a purchase, but that is left up to the consumer.

Personally, I’m in it to play the best games and we should be able to count on the people who are paid to cover them to give it to us straight.

By A.K Rahming36 mins ago
News