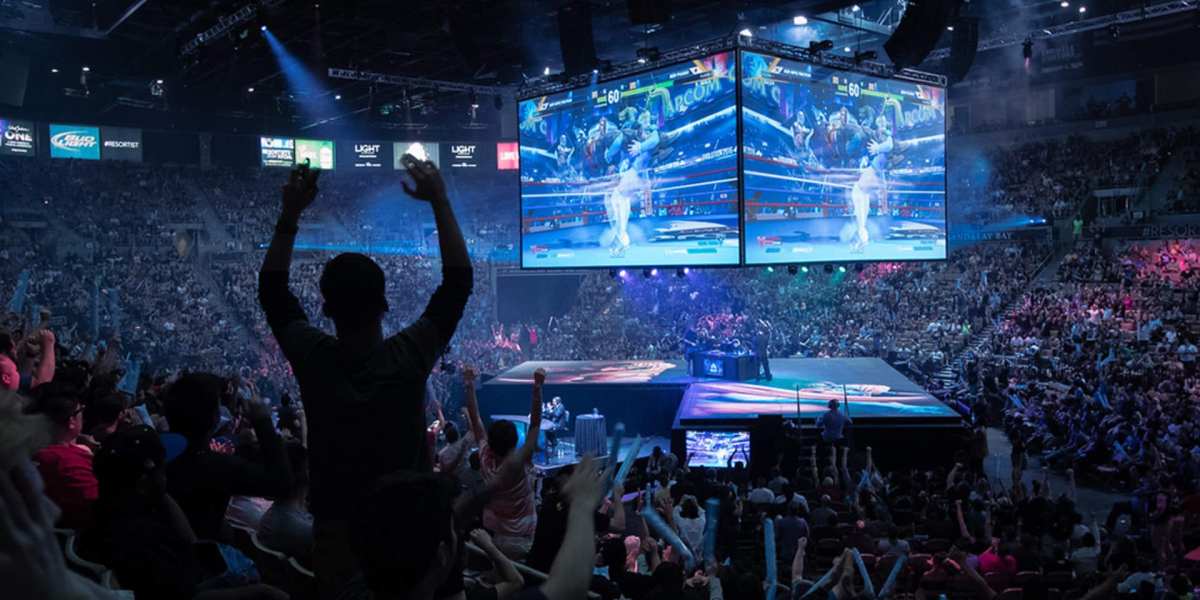 The pandemic and the quarantine that followed hit all of us hard, and on every conceivable angle: from personal, emotional, to even financial. There was a time during 2020 where it felt like things were never going to go back to normal. Even now, things still aren’t 100% what they were pre-March 2020, but it’s starting to look up. With vaccines and boosters widely available, this year has seen the return of many major offline gaming events. For the fighting game community (FGC), the most notable events this year have been Combo Breaker 2022 and CEO 2022.

Perhaps no other gaming communities was hit as hard by the lack of offline events than the FGC. Offline events are the lifeblood of the community and, at least back in 2020, most games didn’t have the netcode to replicate the offline experience. Thankfully that has changed, with most modern games implementing rollback netcode to some degree. Plus, services like Parsec have made it so that players from all over could even enjoy games with bad online play. Earlier this year, Combo Breaker took place in Chicago as the first big “return” for the FGC. From all accounts, the event went very well.

Full disclaimer: The author of this post provided volunteer work during CEO 2022, helping to run a bracket in Guilty Gear Strive.

In the FGC there are three offline gaming events most players consider to be the pillars of the community. EVO, Combo Breaker, and the subject of today, CEO, are among the major events for champions. Hosted by Alex Jebailey, CEO mixes the elements of a tournament, convention, and a wrestling show to produce one of the most electrifying events of the year. I am happy to report that this year was no different, and CEO came back with a bang.

It was clear that attendee’s safety was the first priority for the event. Vaccine cards or negative rapid tests within 72 hours of entry had to be provided, and masks were required to enter. While a small percentage of the community was likely turned off by this, for the most part nobody made a fuss. CEO did have a smaller event last year in Orlando, and the results were mostly the same. Only a few had to be turned away, and masks were provided on-site for anyone who needed them. 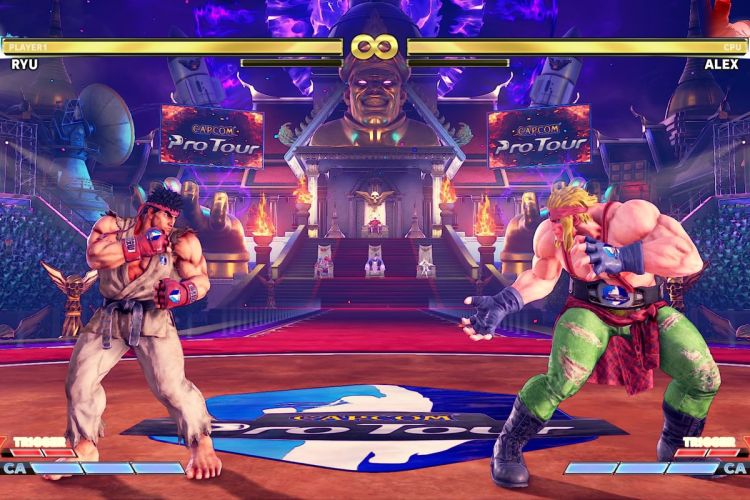 CEO 2021 was a great comeback leading into Daytona

The tournament itself ran incredibly smoothly. All the major games like Street Fighter V and Tekken 7 returned. The latter of which had its first world tour stop at CEO 2022. It was also great to see newer games like The King of Fighters XV and Guilty Gear Strive in the big stadium for their respective top-8 matches.

There were also plenty of vendors in the artist alley selling quality artwork and merch. I definitely spent way more money than what I should have. This year even included a trading card game (TCG) area where players could bring decks from their favorite games to set up matches with others. It was a very welcome addition to the event, as the Venn diagram of TCG players and the FGC is practically a circle. Jebailey noted how much players appreciated the venue and promised it would make a return in future events. Solis Studios even had a setup to show off its game Pocket Paragons, but unfortunately I wasn’t able to win a mat. 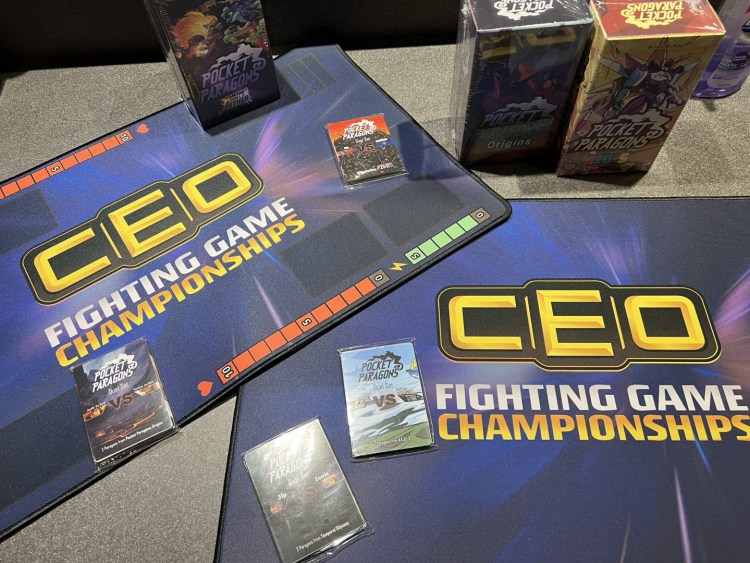 Who wants to play Marvel at 3 AM?

The 24-hour arcade area, Jebaileyland, also returned in spectacular fashion with arcade cabinets, racing machines, and rhythm games. The addition of a punch-testing machine was a big hit, and it always had a crowd of people around it. Jebaileyland also featured a smaller stage for some of the side tournaments, like Street Fighter III: Third Strike and Virtua Fighter 5: Ultimate Showdown. Also, a BYOC (bring your own controller) area gave players a space to set up and play every kind of game imaginable. While I did miss some of the more obscure titles from Jebaileyland in previous years, like Fist of the North Star, it was hard to call the area anything but a success.

Probably the best thing I can say about CEO 2022 is that it felt like nothing had changed at all. Other than everyone wearing masks, everything felt exactly the same. People in general were just happy to be there playing games, watching high-level play, and enjoying the camaraderie that makes the FGC the best gaming community around (in my opinion, anyway). Look no further than the unbelievably exciting Rock Paper Scissors tournament (aptly titled “Janken Ashura”) for proof of that. This wasn’t just felt by attendees, but by high-level players as well.

What did the pros have to say?

Fighting game pro NYChrisG said, right after winning the Ultimate Marvel vs. Capcom 3 event, that the past few years have been rough for everybody. He continued by saying CEO 2022 had been amazing, and that he was happy to see people wanting to connect and interact with each other again. CEO, he said, is where he made his name, and he will always be there to support the event — it’s come a long way. But winning doesn’t hurt either (and he isn’t wrong), he said.

Kizzie Kay of Panda Global echoed much of the same sentiments. Offline is very important for the FGC, and he was thrilled that events like CEO are on their way back. He also noted that offline events for the FGC should be the standard. It’s a statement shared by Apology Man, who we also got to speak with, fresh off his new sponsorship with Red Bull which began that very weekend. He stated that, despite the massive improvements playing fighting games online have gone through recently, online can never capture the same competitive energy as offline. He does appreciate that players are able to practice better than ever thanks to rollback netcode, though. According to him, online or off, the strongest players will always stand above the rest.

Parting words from the CEO of CEO

Last, but most certainly not least, after the event wrapped up and the wrestling ring was about to be taken down, we got to speak to the man of the hour himself, Alex Jebailey. While the rules in a post-quarantine reality are different, Jebailey stated that he and his team were about to run the event just fine. He mentioned that decisions about masks and vaccine requirements may have split some attendees, but the most important thing was to keep everyone safe. Jebailey felt confident that things will be back to the way they were before sooner than later, and that fighting games are coming back in a big way.

With exciting titles on the horizon, like Street Fighter 6, things really are looking bright for fighting games and the community behind them. Jebailey’s next big venture is CEOtaku in September, returning after a three-year hiatus. I’ll be there, and I definitely recommend checking it out if you’re in the Orlando area or are willing to travel.