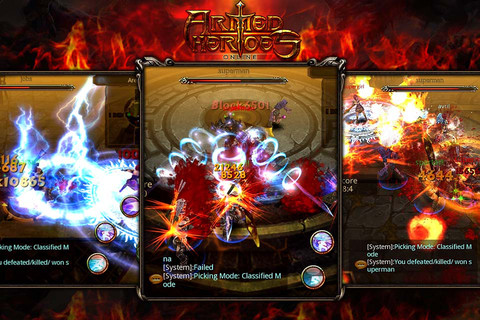 Runic Games has called out iOS game Armed Heroes Online as being a blatant rip-off of the Torchlight series.

Armed Heroes Online has been developed by EGLS Ltd, with Runic Games’ Travis Baldree using Twitter to highlight some obvious similarities between the game and Torchlight.

Baldree has posted a selection of comparison images of characters, enemies, environments and even foliage that show how similar the games are. Runic has since been in contact with Apply in the hope that the game will be removed.

Looking at the screenshot comparisons, it seems as though Armed Heroes Online has completely stolen game assets from Torchlight.

Of course, copies of popular games/franchises are common on the App Store (just look at Gameloft’s entire catalogue), but this is the most obvious example yet and the only one that seems to have cannibalised another games actual assets.

EGLS has since responded to the comments by Baldree over on TouchArcade with:

First of all, we have to say that it is a great shock hearing what Mr. Travis Baldree, president of Runic Games, said about Armed Heroes Online last weekend. We can hardly agree with Mr. Travis Baldree who judged that EGLS “wholesale stole most of the assets from Torchlight!” only based on the similarity between several small monsters. The judgment is simply untenable. Armed heroes Online is an action MMO role-playing mobile game, however, Torchlight is a console PC game. Not only the platforms(Mobile devices vs. PC/Mac), but also game mechanics(multiplayer online vs. console), engine support( self-developed 3D engine vs. commercial authorized OGRE engine) , scenes and techniques employed in Armed Heroes Online developing are all largely different from Torchlight.

EGLS Ltd. is a mobile game developing company in Beijing, China, where we have successfully developed and distributed several MMO role-playing mobile games, from which we have accumulated solid technique skills and abilities for mobile game developing. We started Armed Heroes Online’s developing in 2010; in order to make which a brand new 3D mobile game, we devoted great efforts to develop our own 3D engine based on OpenGL ES to support it. The first version of Armed Heroes Online has been completed lately.

Some members of our team are both crazy game fans and ecstatic movie lovers. They indeed get inspirations from other games and movies, which however is totally different from directly decoding or “stealing” assets from other games. Learning and getting inspired from other games or movies actually helps many game designers generate new ideas and creations. We are always making great efforts to develop games with creative features to find a balance.

In the thread EGSL posted their own set of comparison shots to justify the work and the same thread amusingly compare Torchlight 2’s skill tree system to Diablo 2’s which is not quite the same as ripping off a game’s art or assets.

Don’t get your hopes up, Metal Gear Solid 5 logo is fake

Origin 9.0 will be a “landmark update”, says EA