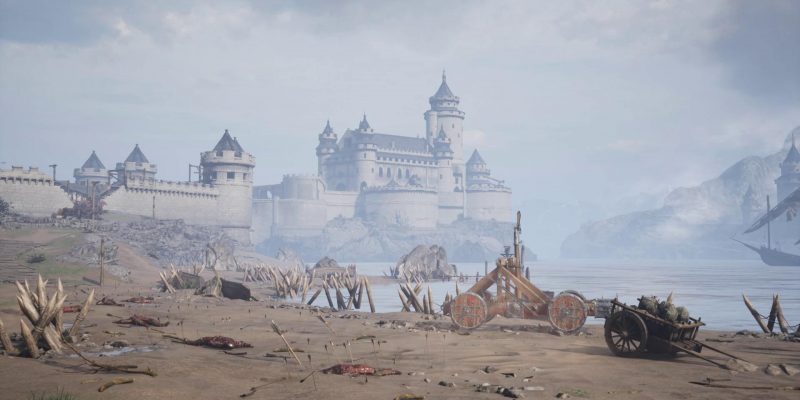 Winning a sword battle in Chivalry 2 can take speed, exceptional timing, and a keen mind for fighting tactics. However, having the numbers to gang up on foes while haphazardly swinging your sword around will suffice in most cases. Welcome to medieval combat gone wild.

All you need to do is pick a class, choose your weapons, and jump straight into the fray. Just hope you do the whole disemboweling thing better than your foes before you’re either completely overwhelmed or shot in the face by an arrow.

You can compare Chivalry 2‘s gameplay to melee combat games like For Honor, except Chivalry doesn’t take itself nearly as seriously. The combat system is also a little easier to become accustomed to. Simply move while clicking the mouse or scroll the mouse wheel in a certain direction to execute different moves. A relatively short training tutorial runs you through the basics while providing brief pointers on weapon swings, stamina, and how to avoid getting skewered. However, pretty much all that training goes out the window once you start fighting other players. More often than not, things more or less descend into chaos once the two armies start running at each other.

Matches support 40 or 64 players with cross-platform compatibility between consoles and PCs. Most maps divide the two factions, Agatha and Mason, into defending and invading teams. The goals are fairly straightforward. Both teams need to shed as much of the opposing team’s blood as they can to either maintain or acquire more ground. Whether you use a sword, bow, spear, or shovel is up to you. Heavy siege and defensive weapons, such as catapults and ballista, are also available on some maps. However, you have to manually load them, which is probably why battles are usually won using blades and arrows.

Generally speaking, all characters have the same basic moves. There’s the reliable slash that hits multiple opponents, while stabbing gives you the most reach, and an overhead strike has the most power. They come in normal and heavy hit variations, so you can chain different moves together to create devastating combos. You just need to keep in mind that friendly fire is always a thing. Wildly swinging your sword around is just as likely to hurt your teammates as it will your enemy. Especially since the prevailing strategy is for groups of fighters to come together and gang up on individuals. 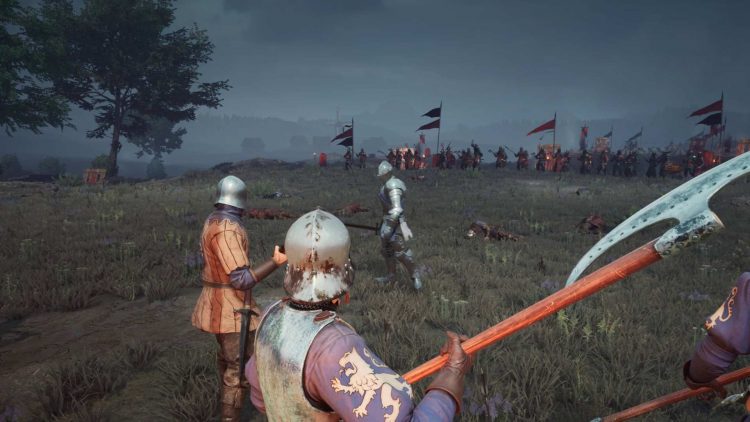 The captain gives a short speech before you storm the castle.

All of it adds up to some thrilling large-scale fights as armies clash against each other to spill blood and guts all over the place. Invaders have different goals, such as scaling the fortress walls, pushing a battering ram to the castle gates, and burning down villages. Defenders need to kill the invaders before they can complete those tasks, which isn’t nearly as easy as it might sound. Especially with the limits to classes such as archers.

Eventually, you’ll have to pick up a melee weapon and fight. Fortunately, the game rewards you for trying out different classes and weapons by progressively unlocking subclasses and weapon types as you score points. Killing enemies and aiding in their demise score the most points, but you can also score by helping dying allies to their feet and pulling off impressive combos. Fighting also earns in-game money to purchase cosmetic changes for your characters and gear. The challenge is in surviving long enough to make meaningful progress with a given character type or weapon.

In Chivalry 2, the only way to get better at fighting is to jump into repeated battles. Most levels involve sprawling battlegrounds where players face off in open fields before taking the fight inside castle walls. A huge part of the joy is the utter unpredictability of each battle, as players choose one of five roles, which determines their health, stamina, and weapons before colliding with enemies on the battlefield. 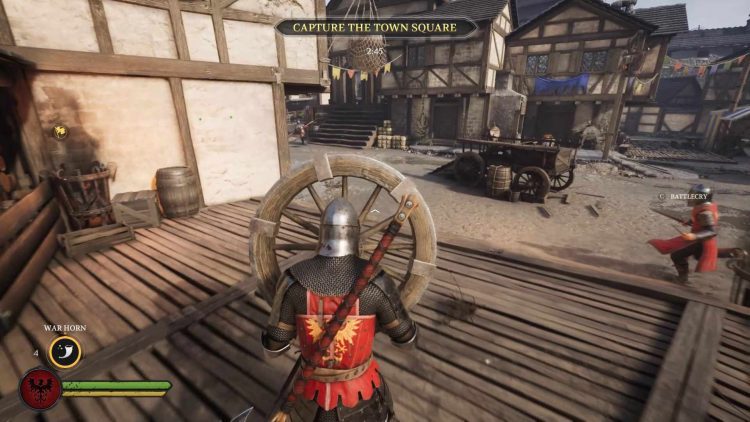 Does a wagon wheel make for a decent weapon? Only one way to find out.

There are a handful of attrition maps included in the rotation, where the only goal is to whittle down the enemy ranks until none remain. Although some of these can be entertaining, I didn’t find them quite as engaging as the objective-based ones.

At any moment, you could be cut down, impaled, shot with an arrow, or obliterated by a ballista while running around. Since you can pick up most things in the world, players can hurl boulders, barrels, and chickens at you at any time. Players can also grab weapons from corpses, which essentially transforms their class. They can even throw their weapons if the situation seems fit for it. All the while, your character occasionally drops one-liners, like how he’s been disarmed after an arm is chopped off.

However, the downside to all this chaos is that it’s not exactly the best environment to learn advanced fighting techniques. In my experience, if you’ve only got a few seconds to live between respawns, then you only get to swing your sword around once or twice before something or someone takes you out. You might get lucky once in a while with a 1-on-1 duel, but these are rare occasions. That’s not to say that there’s no opportunity to improve your technique. Learning to parry and feint can be a struggle. So these skills tend to get pushed aside in favor of simply swinging your sword around and hoping to hit something while trying to block incoming strikes. 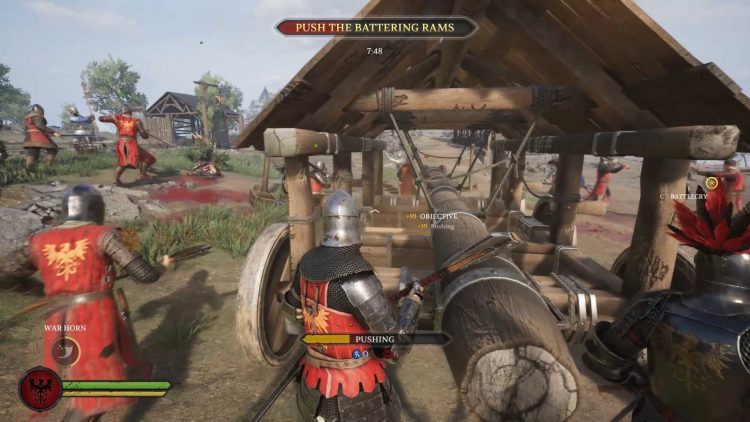 Pushing a battering ram is one of the easiest ways to score points, even if it makes you a sitting duck.

I suppose it doesn’t really matter so long as the chaotic combat stays fun. But it does seem like a wasted bit of the comprehensive combat system. Perhaps Chivalry 2 would benefit from a better training AI that allows you to skip straight to practicing certain moves. As it is, setting up a practice game with only AI players is a disappointing waste of time. Computer-controlled players aren’t much better at pulling off parries than novice human ones, but they also have a terrible habit of standing around and doing nothing until a player wanders near. The practice games end up feeling incredibly creepy. Enemy soldiers simply stand around and stare at each other while you respawn and run back to the battlefield.

Bringing balance to the world

As exciting as the battles can be, Chivalry 2 takes a major hit when there aren’t enough human players participating. The game tries to compensate by adding AI players to the mix, which isn’t much of a benefit. Similar to the practice mode, all but inexperienced players can quickly outsmart the AI characters. They’re also pretty easy to spot, being the only ones that run in perfectly organized lines or stand around doing nothing, which could potentially provide the opposing team some easy kills. I understand the necessity of AI players to help fill out a match, but they clearly need to be much smarter. Or, they should only count as half a player in the total score. 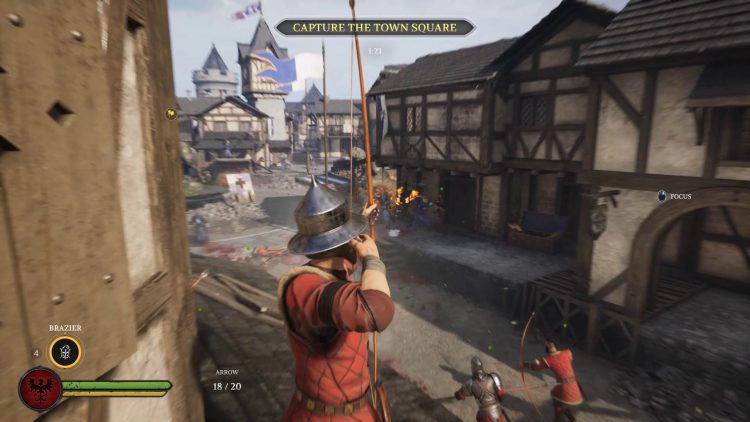 One of the more infuriating aspects of the game happens when the invading team successfully claims territory for themselves. Then, defending players need to retreat to the next area within 20 seconds or end up killed on the spot for deserting the battlefield. I think it’s rather unnecessary, as the system rudely interrupt ongoing battles. Plus, the invading team is usually treated to a couple of free kills while the defenders are retreating or if they hit the spawn-forward key too slow. It gives them an unfair advantage on top of territory gains. Not to mention, the system sets up a weird artificial boundary that defenders can’t cross, even as they chase fleeing fighters or try to cut down archers. It’s obvious that the developers wanted to avoid spawn camping, but this seems like an awkward way of dealing with the issue.

Although there’s plenty of room for improvement, the battles are still exciting. With a few exceptions, the maps generally feel well thought out with different approaches and chokepoints that force armies to clash with each other. Even though it’s a shame that there are few opportunities to practice and improve your skills using advanced moves, it’s nice to have a game that has a relatively low bar for entry. New players can easily fight alongside seasoned ones, swinging their swords and hoping to hit something. To that end, Chivalry 2 delivers plenty of thrilling, blood-soaked action with more free content to come. That’s certainly something to give a battle cry about.

Chivalry 2 delivers plenty of intense, blood-soaked action, without taking itself too seriously. But you might eventually want to do more than blindly swing a sword around.