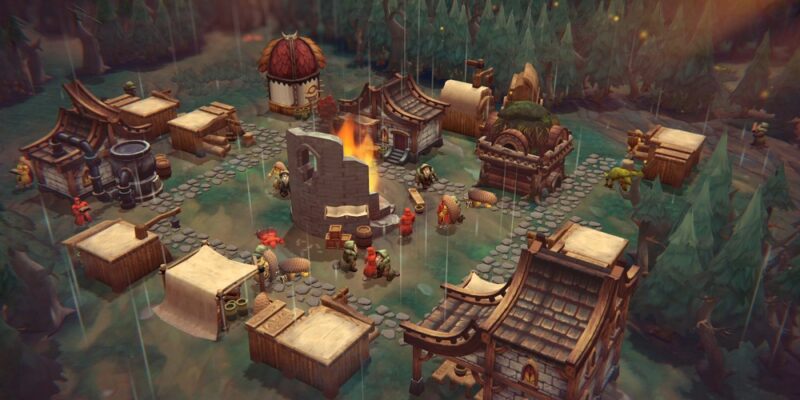 Last year, developer Eremite Games announced its first PC game in the form of Against the Storm, a “roguelite city builder with beavers, lizards, and everlasting rain.” A recent release date trailer shown during gamescom 2021 revealed that the game would make its way to the Epic Games Store on October 18. That remains the case less than a week before the release date, but the trailer did not mention that Against the Storm will specifically come to Early Access on that date. Eremite Games plans to release the game on Steam and GOG sometime next year.

According to the Epic Games Store page, Against the Storm takes place “in a fantasy world where it never stops raining.” Players assume the role of “the Queen’s viceroy — a pioneer sent into the wilds to establish and manage new settlements inhabited by beavers, lizards, and humans.” To succeed in Against the Storm, players must “survive long enough and gather the valuable resources necessary to rebuild and upgrade the Smouldering City.” This city serves as “the only safe haven against the Blightstorm — a vile cycle of destruction ravaging everything in its path.”

Against the Storm grants players the option to “construct an endless number of cities” as they “adapt to the constantly changing conditions influenced by random perks, blueprint drafting, and combos.” The game promises to provide replayability in the same way that many other rogue-lites do. It’ll provide “recurring Blightstorms” that “reshape the World Map,” and “procedurally-generated content on glades” that players “explore in Dungeon Keeper-style.”

At the very least, the upcoming Early Access release of Against the Storm seems like it will offer a distinct take on the city builder genre that many fans will likely appreciate. A free demo for the game has been available for a while now, so players can still check it out if they are curious.

Destiny 2: How to get the Jurassic Green pulse rifle

Destiny 2: Fastest way to farm candies for the Headless Horsepower