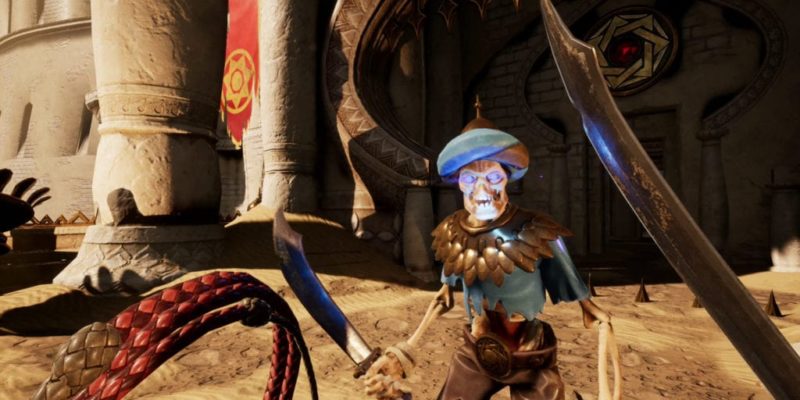 Uppercut Games can trace their respective histories back to Irrational, and contributions to titles like Freedom Force and BioShock 2. Their upcoming title, City of Brass is a first-person ‘rogue-lite’ in a setting that pays tribute to the Arabian Nights tale of the same name. We sent over some questions to find out more about the game, how Uppercut plan to handle the procedural levels, the mechanics of combat, and more.

PC Invasion: You’ve opted for the ‘Rogue-Lite’ moniker over ‘Rogue-Like’; sorry to hit you with a genre semantics question right away, but what makes City of Brass lean more Lite than Like?

[Uppercut’s] Ed Orman: We’re trying to be really careful about setting the right expectations. There’s some general consensus among players about what constitutes Rogue-Likes and Rogue-Lites – loosely, the former needs to adhere pretty closely to the mechanics of the original Rogue, and the latter might combine only some elements of Rogue with other genres. So City of Brass definitely falls into the latter.

PCI: Procedural generation plays a big role in replayable titles like this. You’ve characterised your world as “ever-changing but logical” – what does that mean in practice?

EO: There’s a danger when you start making things procedurally that you’ll end up with a kind of bland, repetitiveness that sacrifices real, designed playability for randomness. With City of Brass, we’re putting in a lot of work to make sure that our city feels like a lived-in place, while still providing a fun and strategic play space – it’s a super-tricky balancing act.

PCI: Procedural generation, as you say, can lose any kind of ‘authored’ feel. What steps are you taking to mitigate that?

EO: We have a layout system that creates logical linkages between indoor and outdoor spaces – so it makes sense to a player when they exit a room that there’s a back alley or marketplace outside – and we’re continuously tweaking the level generator to get that to feel right. We also combine procedural generation (such as street and corridor layouts) with hand-crafted level design elements (platforms, landmarks).

PCI: Could you expand on the time limit aspect to each level and how that plays out?

EO: For City of Brass, the time limit isn’t meant to be a clock you’re always watching – we’re balancing the levels so that you should be able to get through them with a reasonable amount of time left over. But it will mean you can’t dawdle: if you want to explore an entire level and hoover up ALL of the loot, you will need to be quick about it, and being quick in a world filled with things trying to kill you is risky.

When time runs out, you’ll know it, because a horde of unkillable creatures will start pursuing you. If you’re skillful (and maybe a little lucky) you’ll be able to avoid them and reach the exit before one of them catches up to you. 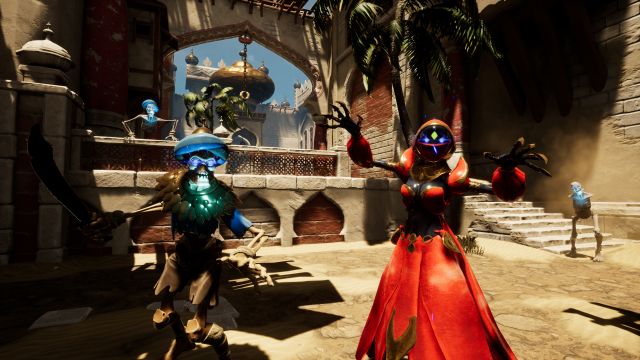 PCI: The loot gained during levels sounds like it’ll primarily be used to purchase gear/upgrades from genies. Will any progress carry over to new runs, or are you starting afresh each time?

EO: Loot is both a resource and your score: however much you’ve managed to gather by the time you die (or, if you’re super skilled, reach the end of the game) represents your total score. So you have to balance that against spending some loot in order to purchase the Relics from Genies that might help you get a little bit further.

You will be able to store items with one of the Genies, and retrieve it for your next run, and we’re toying with allowing you to retain some of your loot, too, but other than that each run is a fresh start.

PCI: It appears that you’re always armed with the whip/sword combo, so could you give some examples of what weapon upgrades would do to that pair?

EO: Both the Whip and Sword have alternate gear that can be found or purchased, some of which is a straight upgrade (the Strap of Impact makes your whip cause more knockback), and some of which offer variations to your play style (the Needle of Tears does less damage but is much faster). There’s a rhythm to how you combine your whip and sword attacks, so changing either of them will require you to learn a new combat pattern.

PCI: In the gameplay trailer, combat reminded me quite a bit of Dark Messiah (using traps, the environment and so-on); are you looking for that same kind of improvised, reactive feel?

EO: Absolutely! One of the trickier aspects to balancing City of Brass is making sure that there’s a reason to use all of the different tools available to the player. So much of it is situational: if an enemy is next to a trap, is it faster to just shove them in, stun them so you can deal with their buddy, or hack away at them and risk taking some damage? The levels should always provide you with a variety of ways to tackle any situation.

PCI: It looks like the whip, in particular, has a whole range of functionality. How flexible is it as a tool? Are you hoping to see footage of players pulling off things you hadn’t specifically designed for?

EO: We are imbuing the whip with as many uses as we can: stunning, tripping, dragging, disarming enemies, as a way to pick up distant objects and trigger traps, and even for player mobility. All of those things combined result in some new combos for players.

PCI: You’re pulling from One Thousand and One Nights/Arabian Nights for your aesthetic; are there any particular stories (lesser known ones perhaps) that you’re paying homage to?

EO: The City of Brass itself is a short story within Arabian Nights, and when I first read it, it stood out to me as a great setting (it’s got an almost Lovecraftian feel to it). But overall, the One Thousand and One Nights has so many different stories that there’s plenty of inspiration to draw from, for enemy types, gear and magic.

PCI: Tell me a bit about the optional Divine Burdens you can take on to make a run more challenging. Is that purely for personal challenge, or will there be other payoffs for using those?

EO: Yep, Divine Burdens are for people who just want to make the game harder for themselves, either because they’ve finished it or they find the base game too easy. So in some ways, they’re a self-selected difficulty level setting.

With that said, I am looking forward to seeing videos of people doing complete runs of the game with all of the Divine Burdens turned on. Even I can’t complete the game doing that. 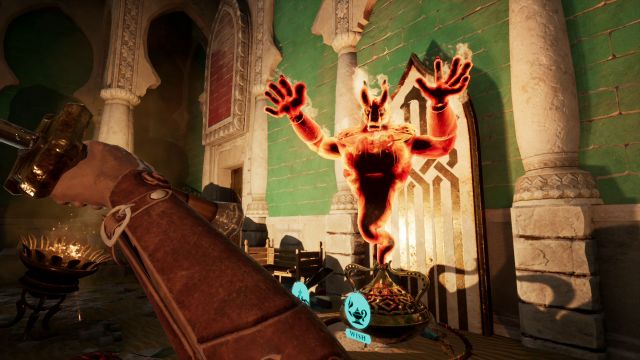 PCI: Since City of Brass is coming to PC first, I presume it’s being designed with keyboard/mouse controls in mind? Any other PC-centric settings in there? We like a nice set of scalable graphics options here at PCI.

EO: Yes, it’s definitely being developed for keyboard/mouse first, and we are obviously working on controller support for PC, too.
Graphics-wise, the great thing about using Unreal 4 is that it comes with a set of graphics options out of the box.

PCI: Do you plan on a full, final release this Fall, or will City of Brass start in Early Access? And, finally, is there a price range in mind?

EO: We’re starting in Early Access – City of Brass is a very system-led game, and we’ve always known EA would be a great opportunity for us to get feedback on those systems from a group of self-selecting individuals who are interested enough to buy in early. The game is already great fun, and we’ll be doing regular updates based on the feedback we get.