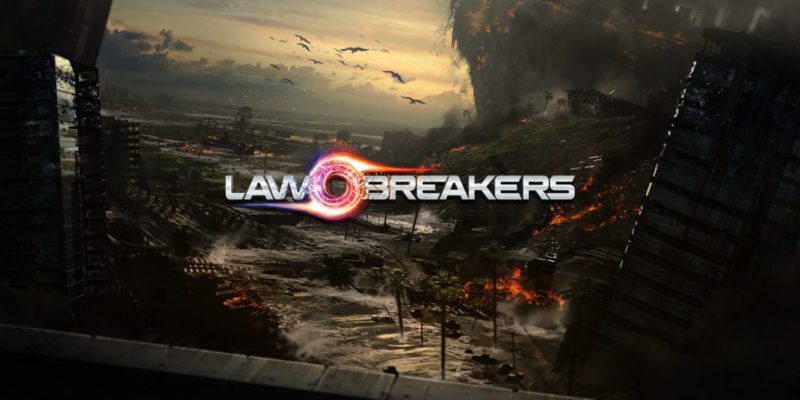 Veteran game dev Cliff Bleszinski has announced – or rather, is announcing – LawBreakers, the first game from his new studio Boss Key Productions.

Right now, LawBreakers is being revealed over on Twitch. As such, details are coming in thick and fast, and I’ll update this story as appropriate. (Update: The Twitch stream is now over.)

It’s a team-based shooter with a heavy focus on gravity, in which organised law enforcement (Law) takes on organised criminals (Breakers). It’s all about manipulating gravity: you can create pockets of low or high gravity, use jetpacks and grappling hooks to get around, decrease gravity to jump higher, increase gravity to slam people into the ground, etc. It’s all very vertical, and very fast-paced.

What’s interesting is the way the gravity impacts everything else. There are lots and lots of weapons (ranging from “aim-down-sight” guns to energy weapons and rocket launchers), but if you fire a rocket launcher in a low-gravity zone, the recoil might throw you in an unexpected direction. As such, there’s a lot of emergent possibilities.

Okay, so they’re currently talking about weapons. Characters will tend to have two weapons, each of which (or most of which?) will have an alternate fire. Not all weapons will have the typical aim-down-sights thing, and they’ll all have some sort of unique twist; the shotguns, for instance, won’t be the typical pump-action shotgun thing. And your second weapon won’t just be a backup – it’ll have its own uses, and it won’t just be there for when you run out of ammo on your primary weapon.

It’s described as a combination of old-school arena shooters, but with the addition of characters with their own individual weapons and abilities. Assassins, for instance, will have double-jump, and you can do things like grapple onto other players, pull yourselves towards them, and finish them off with swords or a shotgun. Audio will play a large part of this, too – you’ll be able to hear when an assassin is sneaking up on you, to try to even things out a bit. And yes, there’ll be plenty of characters of different genders and ethnicities: Cliff reckons that “fully half of the cast is female.”

LawBreakers will be a 5v5 game, and – right now, at least – there’s no “lock” on which characters you can play as. If five people want to play as the big guy with the rocket launcher, they can. Characters aren’t locked to sides in terms of mechanics, but each side will have a different-looking and different-sounding version of the same character. For instance, the big guy with the rocket launcher will have his own name and personality on the Law side of things, and although there’ll be a character with the same weapons and abilities for the Breakers, he’ll have a different name and personality and so on.

It’s set on a futuristic Earth in which the moon has been destroyed, which has messed with gravity and done a pretty good job of shattering the planet. Humanity has rebuilt (this isn’t post-apocalyptic ruins), but all sorts of gravity manipulation is now possible. That said, the game won’t have a fully-destructible environment. While there’ll probably be a few destructive elements, the arenas themselves will be pretty static. (Although what with the gravity manipulation, it won’t exactly be a standard map.)

As an example of a map, one is based around the Grand Canyon… but on a floating island in the Grand Canyon that’s been bought up by the Japanese. Lots of Japanese theming, but you can look over the edge to see the canyon itself.

The Twitch reveal is over now, but the first gameplay trailer of LawBreakers is due Friday. You can see the live-action trailer for the game below.