For the most part, what I’ve played of Company of Heroes 2 has pretty much showed off what I want from an RTS sequel: roughly the same gameplay, but with a few new mechanics, new sides, new units, prettier graphics, etc. When you’re doing the sequel to Company of Heroes – one of the most highly-acclaimed RTS games of all time – you don’t want to stray too far from the path.

And Company of Heroes 2 generally sticks to the familiar. You’re still in World War 2 (albeit now on the Eastern Front). You’re still capturing individual sectors on the map to get resources, and you’re still capturing victory points to whittle down your opponents points and win the map. You’re still ducking infantry into cover or garrisoning them in buildings; you’re still setting up MG nests and anti-tank guns; you’re still spending (rare) fuel resources on vehicles. As far as I’m concerned, this is a good thing. Terrible as I was at it, Company of Heroes was an excellent RTS and the opportunity to ooh and ahh over it again is one I’m happy to take.

But there are new mechanics, and these might prove to be a bit more divisive. The most obvious is the fact that, as we’re now on the Eastern Front, there is usually snow. Lots of snow. Slightly more snow than the police recently found problematic here on the Isle of Man. 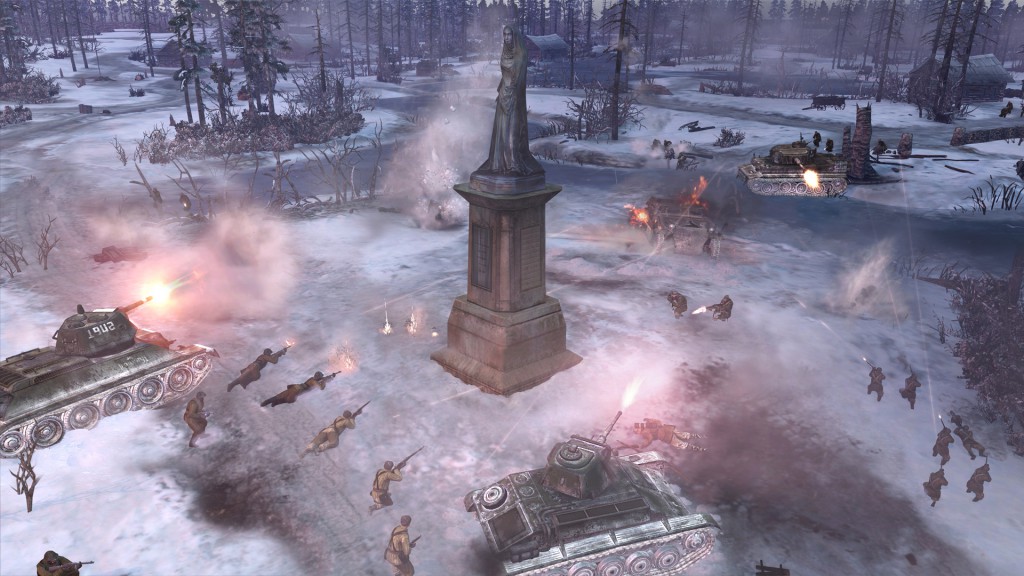 Most of the maps currently available are set during the harsh Russian winter, which actually means quite a lot for your troops; for one thing, deep snow slows everything down a lot and leaves telltale tracks for pursuers to follow. For another, the cold means that infantry need to sit near fires or duck into shelter regularly, or they’ll start to die of exposure. For a third, periodic blizzards completely cut you off from air support, massively lower visibility, and increase the chances of your chaps freezing to death. And, of course, holes can be punched in frozen rivers if you’re in the mood to sink an opposing tank column that’s trying to rumble across the ice.

Armchair tacticians will have already spotted some possibilities here. Blizzards tend to cause periodic breaks in the fighting as players hunker down and reinforce… but if you’re feeling cruel, you can maybe use the opportunity to either reposition troops while visibility is low, or possibly capture a sector or two that the enemy might have difficulty getting their troops to in the middle of a snowstorm. The harsh environment is very much a big case of risk/reward; do you risk rushing your tanks over that frozen river, even though they could so easily be sunk? Do you send your elite squad of Panzergrenadiers out to capture a point in a blizard, even though they might take some losses from hypothermia? Do you reposition that sniper while visibility is low, even though she might waltz right into a pack of soldiers she can’t possibly fight off at close range? Hmm.

The other major new mechanic is one that, I suspect, will be a bit more divisive: mortars. I hate mortars. So much.

Early on, both Russian and German forces get access to mortar teams, and these packs of complete bastards are exceptionally skilled at completely ruining your day. With an absurd range and the ability to bombard an area, a decent player with a bit of luck can drop shells on the heads of your troops as you try to capture a point, or try to aggressively move through a sector, or… just about anything. And thanks to their range, you probably won’t even know where they are until they open fire.

Of course, they’re also exceptionally weak to just about anything that moves. They’re defenseless against scout cars, infantry squads, or just about anything else that can get in firearm range. The problem is getting in firing range when these shitters are shelling you.

This weakness makes them extremely satisfying to use right. Set a few up within range of your southern points and then send your regular troops up to capture points in the north, and should a savvy opponent try to push south while you’re otherwise occupied, you can drop bombs on their heads and possibly force them into retreat. As psychological warfare goes, they’re really good at convincing the enemy that you’re everywhere. Alternatively, if you’re the skirmish AI, they’re really good at precision long-range fucking-up-of-the-player’s-plans.

So yes, right now, Company of Heroes 2 appears to be strategically and tactically sound; the new units and mechanics add plenty of possibility for mindgames and individual tactics, and the sides are different enough to keep them interesting.

Speaking of those sides – the Russians and the Germans – they’re differentiated in much the same way as in the first game. The Germans, like the first game’s Wehrmacht, have to level up “Phases” before they can construct advanced buildings and units. The Russians, on the other hand, have pretty much everything available from the get-go, and focus more on pumping out large numbers of units. While German Grenadier squads consist of four men, the Russian’s Conscript and Penal squads field six. A German sniper works alone, while a Russian sniper works in a team of two. Etc. If this sounds unbalanced, it doesn’t appear to be thanks to other mechanics in play. For instance, the basic German barracks can field almost all of the infantry you’d want, while the Russians need two buildings to get their rough equivalent units – and German troops seem to be a little bit tougher.

Each side also has individual “Commanders” which function akin to the first game’s Doctrines, offering exclusive units, buffs, and abilities. This is where Company of Heroes 2 gets into territory I haven’t explored too deeply.

Before beginning combat you can select a loadout for your force, choosing three “Bulletins” (various minor buffs, like a 2% accuracy bonus for infantry) and three Commanders, with more unlocking as your profile gains experience and fulfils various challenges. As the battle progresses, you choose one of those Commanders and get access to its buffs. So far, so Company of Heroes, but I’ve yet to unlock any extra Commanders so I can’t really comment on how well the system works or how many there are. I can, however, see the potential for mindgames here, and none of the buffs appear big enough to be hugely unbalancing.

New stuff aside, CoH2 does just about everything else as well as the first game did. It’s a pretty game, with a focus on overall impact rather than up-close textures, and the battlefield deformation tends to result in the middle of the map being one huge crater made up of many smaller craters by the halfway point of a battle. Considering how pristine everything looks to begin with, that’s rather neat.

Contextual voice acting is back in, with soldiers’ cocky shouts when moving them out of base changing to screamed, hurried, swear-filled orders when you’re trying to pull them away from an MG nest that killed half of the squad, and I can’t emphasise how much I love this. All of this adds up to a game that’s dripping with atmosphere: the constant pounding of huge guns, explosions, screams, and barked orders creates a contextual soundtrack reminiscent of Saving Private Ryan, and the visual deformation leaves buildings as rubble and creates huge jagged scars in the earth. War is hell, but it looks good here, and it’s awfully fun to play at.

In short, everything looks to be coming along nicely. As a game, it’s highly reminiscent of the original, but with a number of tweaks that will likely greatly change the way things play out. I can’t speak to balance or the high-end competitive multiplayer scene because I’m frankly terrible at the game, but on a basic level everything seems to be fairly well thought out and fun to play with. In short, this looks like it might just be a worthy successor – and when we’re talking about one of the highest-rated RTS games of all time, that’s no small thing.