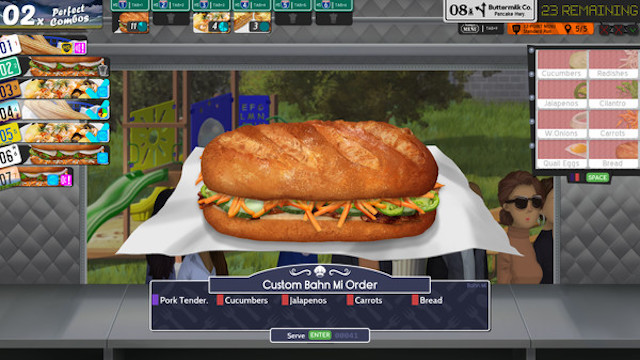 For those of you who love preparing a scrumptious virtual meal, Vertigo Gaming has just the thing. The developer announced today that its latest game, Cook, Serve, Delicious! 3?!, is about to hit early access. It’ll arrive on January 29, with a release on both Steam and GOG. It’s priced at $14.99.

Who’s ready for some yummy food on PC?

For those who aren’t familiar with the series, Cook, Serve, Delicious! 3?! lets you travel across the United States. You’re competing in the Iron Cook National Food Truck Championships, with a trusty robot crew (including Twitch streamer Negaoryx) by your side.

As you continue your journey in this radically changed American landscape, you’ll prepare all sorts of dishes. “Hundreds of foods” are on hand, including new ones specifically for this sequel. It’s up to you to master the new gameplay structure and prepare the right things to get you closer to winning it all!

There’s also a new Chill Mode, which you can flip on at any time. This will enable you to prepare dishes however you wish, with no pressure. For some of you creative types, this is a good way to go, as you might learn a thing or two. You may even be tempted to try and make such a meal in real life.

Cook, Serve, Delicious! 3?! features a single-player campaign, but it also has the option to join up with another player in local co-op. In addition, you can upgrade your food truck in a number of ways to improve performance and gameplay techniques. Your food catalog can also see expansion, in case you want to strive to make something different. And finally, with a number of locations across the U.S., there are more than enough stops to make.

The full release of Cook, Serve, Delicious! 3?! arrives sometime this summer. But if this interests you, don’t hesitate to jump into the kitchen for its early access debut.