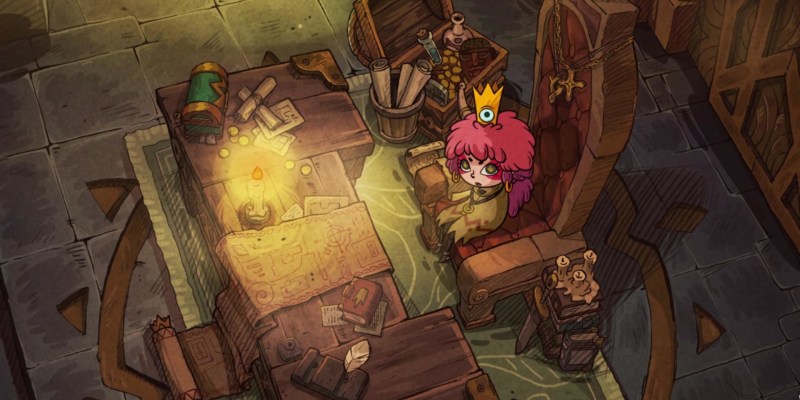 In the past few months, I’ve played several rogue-lite games from the likes of Hades and Risk of Rain 2. Those are known as “action rogue-lites” due to the emphasis on faster movement and attacks as you explore stages. This time around, I had the pleasure of trying out Crown Trick, a new title from developer NEXT Studios and publisher Team 17 Digital.

What makes Crown Trick different from the aforementioned examples is that it emphasizes turn-based combat with RNG-based mechanics mixed in.

In Crown Trick, you play as Elle. The opening cinematic implies that she’s ventured forth to a mystifying locale known as the Dreamrealm. Here, enemies abound and it’s up to you to help Elle survive.

Along the way, you’re guided by a sentient crown companion. This kicks off the tutorial and the rest of your journey where every dungeon floor has multiple rooms. Many of these have you facing off against several mobs whereas others hold treasure chests, secrets, and unique dilemmas that offer a choice. 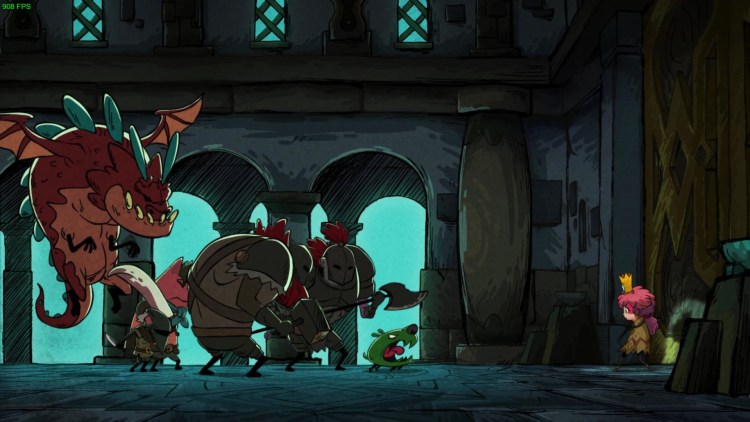 As mentioned earlier, Crown Trick uses a turn-based combat system. Whenever you enter a room with an enemy encounter, you move from tile to tile normally while hostile mobs do the same. I’m reminded of one of my favorite PlayStation 1 games — Azure Dreams — because of the dungeon delving and turn-based exploration.

Furthermore, this is where tactical acumen and strategic planning apply since you can only move upwards, downwards, and to the sides — there’s no regular diagonal movement whatsoever. Should you move forward more aggressively and risk an enemy’s attack? Or would you prefer moving off to the sides to gain an advantage when your foe closes the gap? Perhaps you should use the “Blink” ability too? It has limited charges, but it lets you teleport to another tile without causing enemies to move or act. 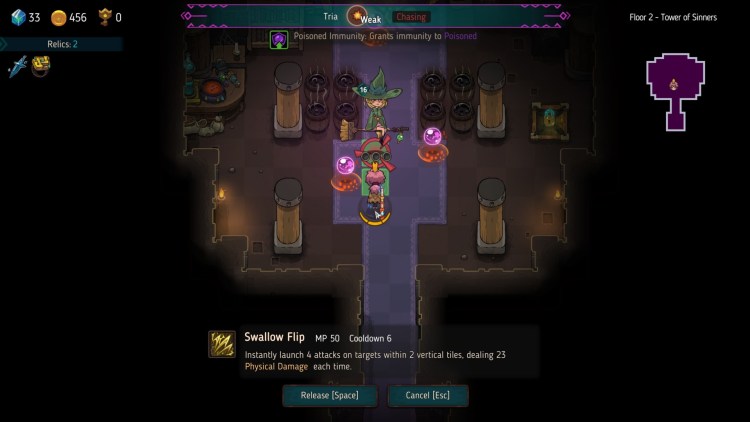 In addition to basic movement, Crown Trick gives you a plethora of weapon types, each one with its own attack range and coverage such as sniper rifles, staves, pistols, and daggers. Axes tend to be my favorite since you can hit every mob surrounding you.

Weapons also have affixes. The higher the quality of the weapon, the more affixes it could have. Oh, and if you beat up your opponents severely, they might just “break,” allowing you to attack them with impunity while they’re stunned for several turns. 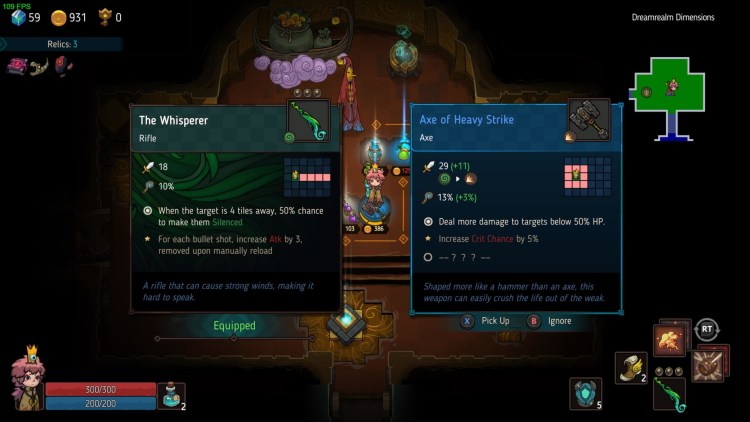 Crown Trick‘s items and relics complement your weapon of choice. Items are your basic consumables such as those that cast debuffs, direct damage, or protective barriers. Relics, meanwhile, can be considered temporary buffs akin to passives that last throughout a run.

Likewise, you have over a dozen familiars with various skills. These familiars are initially fought as elites monsters. Upon defeating them, they’ll grant you their powers and abilities when selected. For example, the Trickster lets you fire a Gravitation Field that sucks in enemies. You can also use a Lightning Orb that bounces between nearby targets. 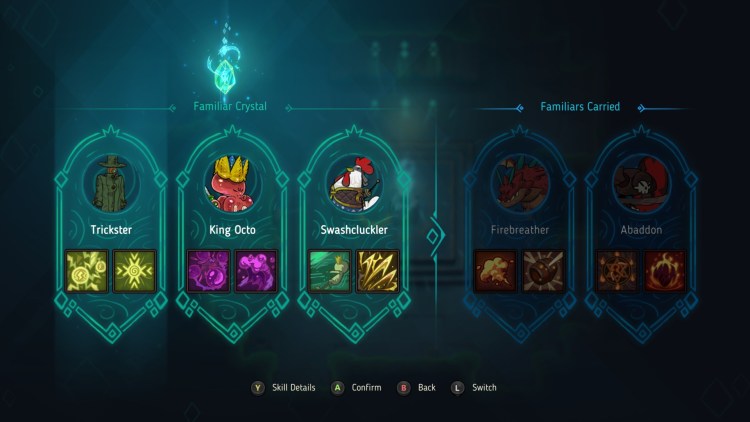 My top pick, though, is Firebreather. It lets you throw an explosive barrel that not only blocks the movement of hostiles, but can also be made to go boom when it’s destroyed. This damages anyone caught within the blast area while applying a fire damage-over-time (DOT) effect.

Due to the rogue-lite nature of Crown Trick‘s gameplay, your runs often start and progress differently. You could have myriad weapons, relics, items, or familiars to select from, yet these are randomized at the start of your attempt. You’ll never know what you’ll get as you continue onward. 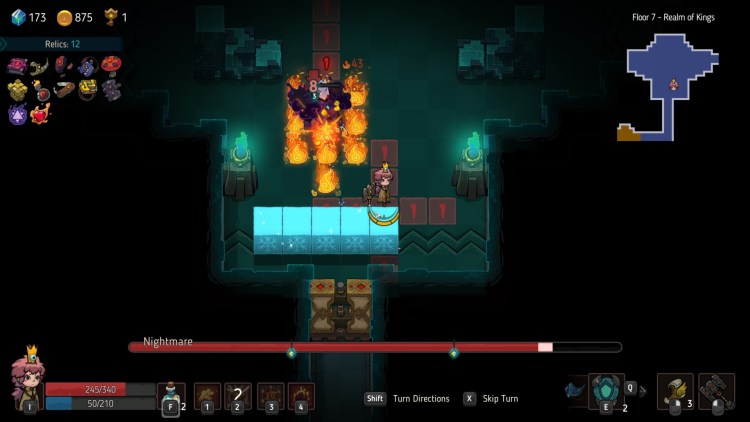 Speaking of randomization, some rooms might contain slot machines or challenge rooms. There’s even a nod to Thanos’ Infinity Gauntlet. You can continue powering this up as if you’re socketing Infinity Stones.

Moreover, Crown Trick‘s dungeons might have particular events with decisions for you to make. It’s possible to find a shrine that grants a buff — like full healing, double damage, or immunity from elemental status effects. Those sound swell, however, there are downsides — such as your character bleeding until you kill enough enemies, or taking quadruple damage in return. 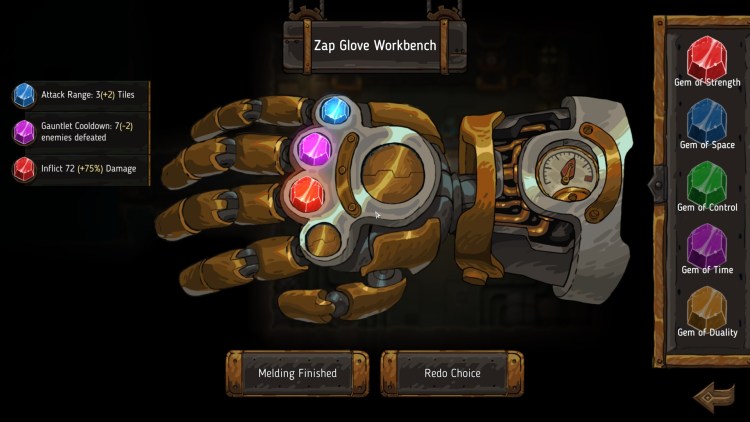 Battling those bosses and fresh starts

At the end of each floor, you’ll find a boss waiting for you. The bosses in Crown Trick all have unique spells and mechanics. One of them, Vlad, even has several variants. This includes an encounter with mechanics akin to “chess,” complete with pawns that transform into queens once they reach the opposite edge.

Anyway, most zones will have three to four dungeon floors to beat so it gets permanently completed. If you fail at any time before that, you’re back to square one. Conveniently enough, there’s a vendor that sells wares and a restoration pool just before you head to the next floor (kinda like Hades). Even the crown companion itself replenishes your mana and Blink charges when you enter a room filled with enemies. Still, if you failed your run, or if you cleared the entire zone, you’ll end up back in Elle’s HQ in the Dreamrealm. Your base has several NPCs that provide permanent buffs and boosts. 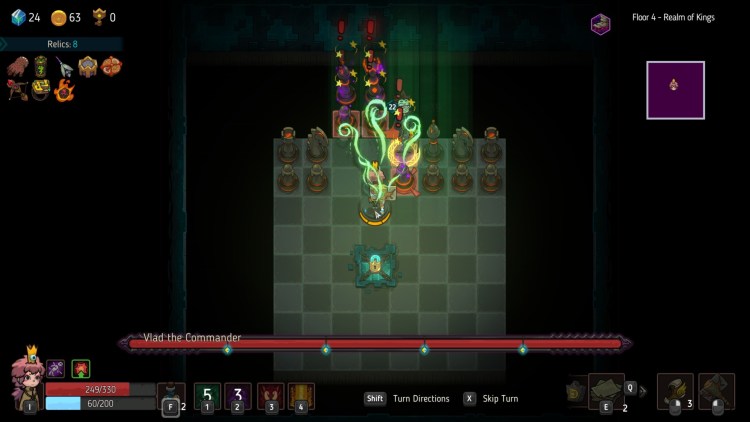 My main gripe in Crown Trick, however, is that every new attempt is heavily reliant on whatever you find in the initial room. Pray to the RNG gods that you’ll have the weapon and familiar you need. Otherwise, you’ll feel severely gimped and it’s going to be a pain to continue your trek. Indeed, there’s an over-dependence on the initial items or spells that’d make or break your run regardless of what you spot later. That means restarting over and over until you could have a combination that’s preferable. This can be somewhat tedious too.

There’s also little variety with regard to tilesets, encounters, and bosses. Although dungeon floors in Crown Trick are procedurally-generated, you’ll notice the same baddies you’ve seen in the past throughout multiple runs. Furthermore, my other concern with encounters, in general, is that certain effects seem opaque or confusing. There were times when I didn’t know why my character was losing HP or why my attacks no longer dealt damage. 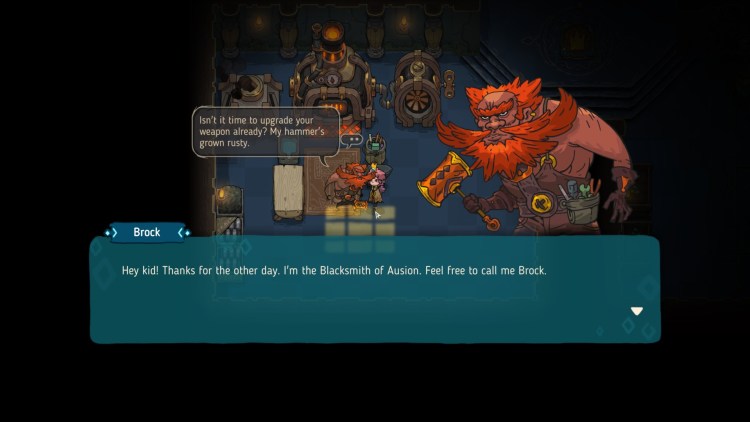 Crown Trick‘s turn-based combat and strategy formula, including planning your tactics and the plethora of weapons, relics, and abilities, are all remarkably fun and engaging. I found myself playing a short romp late at night and, the next thing I knew, the sun was already up. It’s ridiculously addictive, and the core gameplay loop will keep you coming back for more.

You’ll experience the challenge you’ve come to expect from the rogue-lite genre, but the difficulty is always fair. Again, it’s just the tediousness of having to restart until you get the “proper” initial room you want. The capabilities of weapons and/or familiars will feel restrictive especially if you’re gunning for an ideal build. Unlike Hades or Risk of Rain 2, the concept of mixing and matching in Crown Trick is significantly limited, and we might need to see some tweaks, balancing, or improvements down the line.

In the end, though, Crown Trick remains a crowning achievement for NEXT Studios. It just might become part of the pantheon of new rogue-lite titles that’ll charm and excite players. You might want to give it a go once it releases via Steam tomorrow, October 16. 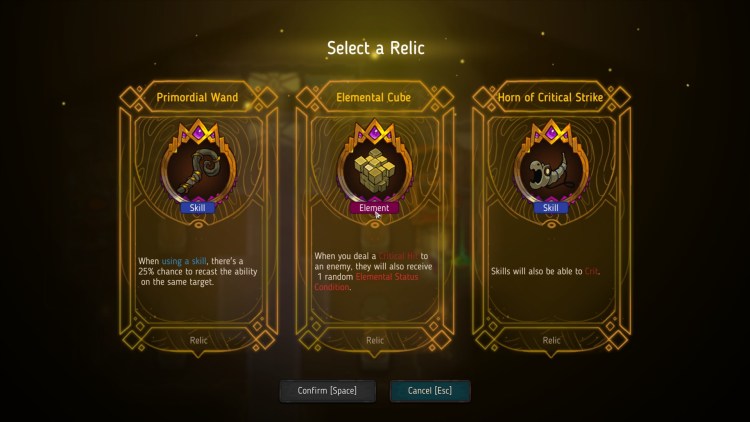 A turn-based rogue-lite title that has you delving deep within dungeons and using various elemental abilities and weaponry.
8.5

Crown Trick offers turn-based tactical depth as you battle your foes on numerous dungeon floors. You'll chain the effects from traps, items, spells, and the elements, all while hoping you're lucky with the RNG. It's rogue-lite goodness wrapped in a challenging, engaging, and highly enjoyable package. Just be ready to restart manually often if you want to have an ideal run.

Hearts of Iron IV: Battle for the Bosporus — National Focus Trees for Greece, Turkey, and Bulgaria