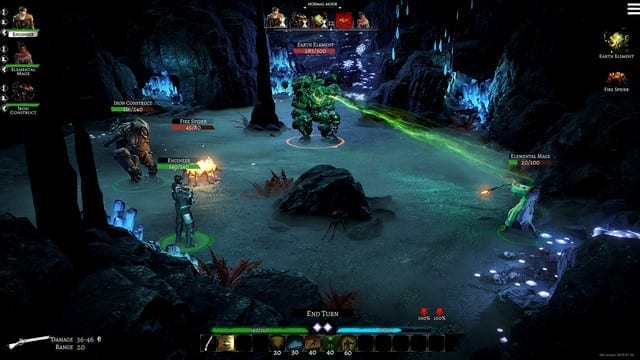 It’s not easy to live up to one’s influences and inspirations. Dark Envoy is a new CRPG announced by Event Horizon, who previously released Tower of Time. Dark Envoy aims to be a non-linear CRPG inspired by the Divinity series, BioWare RPGs such as Dragon Age, and also XCOM and FTL. It’s a really tall order for an indie game to brush shoulders with such giants of the genre. Event Horizon aims to pick up where they left off with their debut title Tower of Time, though Dark Envoy isn’t a sequel. Instead, the game aims to “shatter long-standing RPG tropes” and to attempt something unique in the process.

Dark Envoy will feature free world exploration with a steampunk Skyship as your base of operations. When aground, you’ll have your hands full with tactical turn-based combat that boasts layers of lore and strategy. You’ll seek mythical locations and explore procedurally generated dungeons with optional tactical objectives. Apparently, you can just grind your way through these random dungeons, or you can go for a more tactical crawl instead. The world map also reacts to the passing of in-game time and adjusts accordingly. If you revisit some locations later, enemies and items will respawn, and it will be more challenging.

Combat will feature a real-time pre-combat phase, then transition into turn-based tactics. I imagine it will be similar to Mutant Year Zero: Road to Eden, just not as focused on stealth. Tactics and party power are equally important in Dark Envoy‘s combat. According to the developer’s clarification on Steam, you will start with two main characters, which you can create from scratch. It’s probably not unlike Divinity: Original Sin. Along the way, you can recruit more characters from a roster of 6-8, though there is a party limit of 4 in combat.

There are also 15 unique character classes to discover, and you can mix skill trees. You can only discover some rare classes in remote locations or via the completion of chained quests. Players can expect all the usual trappings of CRPGs as well. Player choices will impact the world, and there will be multiple endings that reflect the characters’ personalities and decisions. You can play it solo or in two-player co-op, but it also features a new mode called Players vs World, where “Player 2 acts as the final boss and seeks to destroy Player 1 before they can become too powerful.” It looks like you can foil Player 1 and try to sabotage their progress through the world. There are no details on how this will work, but it does sound interesting.

The game is co-written by Michael Chatfield, an Amazon Top 100 writer of science fiction and fantasy. This might help the narrative stand out, though book writers in games can be hit-or-miss. Kingdoms of Amalur: Reckoning, for instance, featured R. A. Salvatore. Either way, I’m definitely interested in Dark Envoy, and I hope it manages to live up to its influences. But that certainly won’t be easy.

What do you think of Dark Envoy? Is it too ambitious, or can it brush shoulders with the giants? Leave your comments below and tell us what you think!

Heroes of the Storm has a new Nexus Hero called Qhira