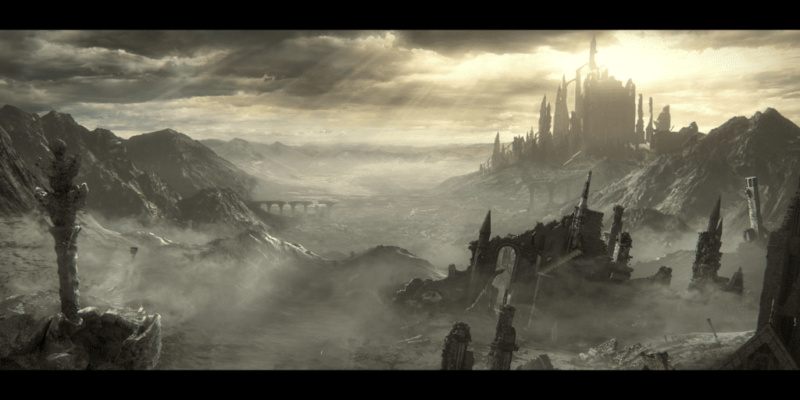 Dark Souls 3 is only being shown behind closed doors at E3. That presents a bit of a problem for me, because I’m not currently in Los Angeles. Nor, for that matter, do I possess the necessary moxie to blag my way in to the presentation at the last minute with a tall tale about how my cousin works for Namco and, hey, actually I’m doing a human interest piece for The New Yorker about games writers being teased with hands-off presentations.

Undeterred, I’ve managed to piece together all sorts of details about Dark Souls 3 and compile them in one place. The bizarre manner of this game’s slow-leak-reveal and a slight nervous throb in my head that kept saying ‘but what if FromSoft make one Dark Souls too many?’ had me slightly worried for a while, but this information all bodes pretty well so far.

Needless to say, this is not the article to be reading if you want to be on media blackout for Dark Souls 3 info.

The jet of flame represents the stream of Dark Souls 3 news coming out of E3.

The backlash against Dark Souls 2 for being slightly worse than best-videogame-for-fucking-ages Dark Souls has led to a bit of pseudo-deification of Hidetaka Miyazaki. That’s weird and overblown, because he didn’t make Dark Souls (or Bloodborne) on his own. The Design Works Souls interview and a basic knowledge of how games are produced should make that very clear.

However, it’s also clear from his directed titles that he’s a thoughtful chap who understands how to get a team to impart specific thematic vision through videogame design. His educational background is in the social sciences, and this tends to be heavily reflected in the style of the games he’s involved in. They have smart, symbolic narratives, and unique approaches to social interactions (covenants, invasions, gestures, and soforth.) If he’s available, you’d definitely want him involved.

Miyazaki has been cited as the co-director of Dark Souls 3, and (to reassure those who suspect a devious marketing ploy) was reported as leading the presentations of the game at E3. He was in the room. Somebody there could’ve touched him (and then been escorted out for inappropriate touching.)

Dark Souls 3 has apparently been in development at FromSoftware for around two years, and Miyazaki joined the project half-way through the prototype stage. It is the last game that was started at From before Miyazaki became president. His fellow co-director is Isamu Okano (from the Steel Battalion series, oddly enough.) Dark Souls 2 director Yui Tanimura is said to be getting involved in a non-directorial role too. 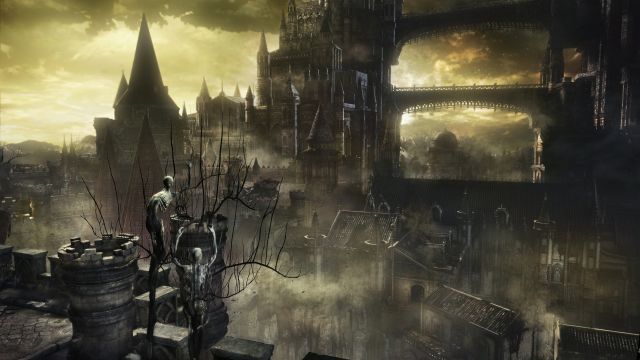 You can probably go over there. And then loop back to a different area with an unexpected ladder.

One of the apparent benefits of having Miyazaki involved is that, by his own statements, he loves interconnected worlds. The connected nature of the areas found in Dark Souls (where there are shortcuts and paths galore between zones) will return in Dark Souls 3. Most reports note that there will be no ‘world hub’ in this one, though it’s also been mentioned that there’ll be some kind of ‘base camp.’ That sounds more Firelink Shrine than (say) Hunter’s Dream to me.

It’s said that there will be fewer map ‘types’ (so, I guess fewer distinct, named zones) than in Dark Souls 2, but that each of the areas will be larger overall.

Not a whole lot of story-related things have been divulged yet (which is fine by me – save that for when playing the game); but the name ‘Lord of Cinder’ has cropped up a lot. He may or may not be the giant guy seen at the end of the CG trailer, as said Lord has supposedly been resurrected. Miyazaki has been quoted as saying that ‘Lord of Cinder’ is a more general term, however, and not one which necessarily refers to any individual. So maybe hold off on those Gwyn theories for now.

It sounds as if Dark Souls 3 shares the same world as both prior titles, though, so there will be some degree of continuation there. The overall theme seems to be pointing towards decay and collapse, even more so than the first game. A waning sun has popped up as a motif in a few discussions and images. 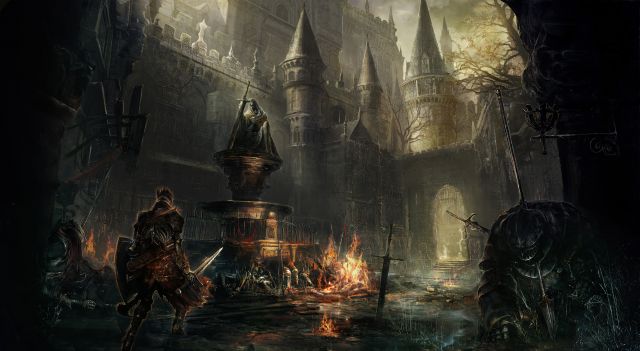 This courtyard has seen better days.

I’m not going to try to speculate about the intricacies of the speed or ‘feel’ of combat from second-hand accounts of a hands-off demo, because that would be mental. Broadly speaking, it sounds like Dark Souls 3 will be slower-paced Souls-y style, rather than the quicker, aggressive combat found in Bloodborne. Rolls rather than side-steps, shields returning, that sort of thing.

Certain weapons in the game will have ‘Stances,’ which do sound a little bit like the alternative ‘trick’ modes from Bloodborne. The one shown was apparently something called the ‘Ready Stance,’ used with a straight sword. When adopted, the character puts away his shield and holds the blade in two hands with the tip pointing forwards. Rather than just being the regular two-handing from prior Souls games, this gave the character guard break attacks against shielded enemies.

Bows now sound as if they’re viable, stand-alone weapons (rather than just side-weapons or for gimmick runs.) The short bow can fire very quickly, up close, while long bows are still more effective from range (and will take longer to draw, and so on.)

Dual wield weapons appear to be in there too. Something called the ‘Legion Scimitars,’ sounding a little bit like the Blades of Mercy from Bloodborne (able to be single or dual wielded, but from a single item slot.) Some weapons will also have new moves, such as ‘Lunge’ for the greatsword, which does a sweeping uppercut that can launch enemies into the air.

Happily, ragdolls are making a return, which should go very nicely with these new attack options. The kick from Dark Souls is back as well. 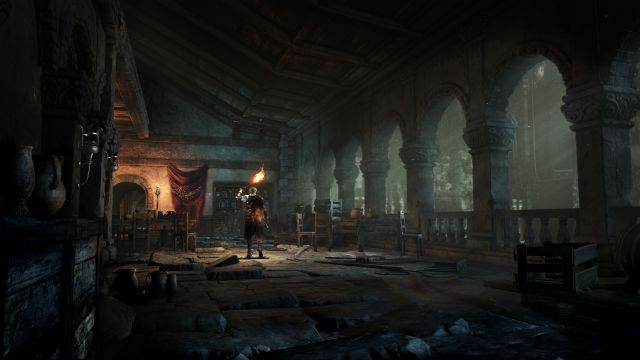 The torch may be of greater significance this time.

I’ve seen no mention of magic (other than to note its absence) from the presentation, but it’d be unwise to read too much into that since the demo was only said to be about 20 minutes long.

There will apparently be darker areas where a torch comes in handy (no, really this time,) as suggested by the image above. It won’t be limited in time like the Dark Souls 2 one. According to those who were there, Miyazaki has promised that a torch will be important for exploring darkened areas. I can’t confirm whether he did a pinky swear.

One of the few pieces of “ehhh” news to come out of this Dark Souls 3 info-deluge is that From is aiming for 30fps with this title. Now, that’s probably directed at the console versions, so it can probably be worked around on the PC if necessary. A straight 60fps option for PC right out of the box would of course be preferable, but we may have to prepare for that not being the case.

On the multiplayer front, summon signs are returning (which may also indicate covenants, though none have been specifically mentioned,) and specific questions about Soul Memory have been met with reassurances that Soul Level alone will determine matchmaking. While on that subject, the term ‘dedicated servers’ has been tossed around, but most have speculated that this means a system similar to Dark Souls 2 (where a server makes connections between players, but the encounters are still on a peer-to-peer basis.) Anything beyond that seems a little unlikely.

Dark Souls 3 is due in ‘early’ 2016, and at this stage is sounding just dandy. Except for that 30fps thing.