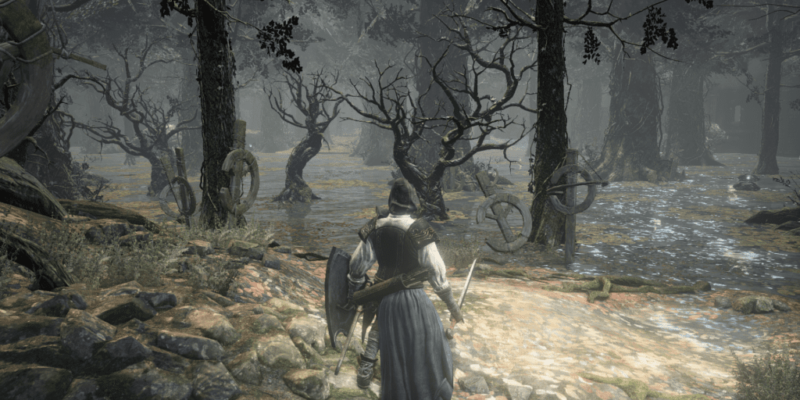 There’s been a spate of unpleasant Dark Souls 3 invasions happening of late on PC, so here’s a short piece with what to look out for and what you can do to protect your characters. A lot of this will be echoing a compiled Reddit post, but it helps to spread this stuff around when it’s good information.

Invasions by people who are cheating in Dark Souls 3 are pretty inevitable. Normally you just run into a guy who’s given himself infinite health via a CheatEngine or some other means, and you die. Annoying, but nothing major.

Unfortunately, there are some players who have discovered (as they did with Dark Souls 2, and maybe the first one as well) how to manipulate the game’s code to ‘buff’ their weapons with unhelpful effects. An example of this is a weapon that, whenever it hits someone, will give them loads of souls. Doesn’t sound too bad, except that this many souls gained at once will set off FROM’s cheating alarms and possibly result in you being softbanned.

Softbanning is less pleasant than it sounds, because it pretty much restricts you to playing with other soft-banned players. To my knowledge, these are rarely reversed, and they’ll apply to any new Dark Souls 3 characters you make on the same Steam account.

Your first clue that your character may be afflicted with something nasty, is if you see the message about “Invalid Game Data” when you load up the game. As per this description from Namco Bandai, that message is your heads up that something iffy has been detected (modification of data, etc).

According to Namco: “During the time that the warning message is displayed the end user will have a chance to completely remove any such external files, mods, cheats/hacks or delete their game save (if alterations were performed to it or hacked items/equipment were obtained either as a direct cheat/hack or via unknown “gift” from an online player).”

Basically, during this period you still have a chance to revert your character and avoid harsher punishment (softbanning). The simplest way to do this is to switch to an older save.

This advice comes straight from Namco Bandai themselves, who say: “It is recommended that players should always back up their save data to an online service (such as cloud saves) or as a direct back-up of the save file to a separate folder/directory (for PC/Steam). This would allow any players who; end up receiving a hacked item/equipment unknowingly from an online player, the ability to restore their original game data from the cloud or separate backed up game data.”

Of course, Dark Souls 3 being the sort of game it is, it doesn’t keep multiple save back-ups. So you need to do that yourself. You can either do it manually, by finding your saved game in ‘Users\[username]\AppData\Roaming\DarkSoulsIII\[folder with string of letters and numbers]’, and copying the ‘DS30000.sl2’ file, or by using a handy automated backup program.

If you run into a nasty invasion encounter (or get the “Invalid Game Data” message for whatever other reason), you’ll now have a ‘clean’ save you can drop back in. This is also just a pretty good idea in general, in case anything happens to your main save.