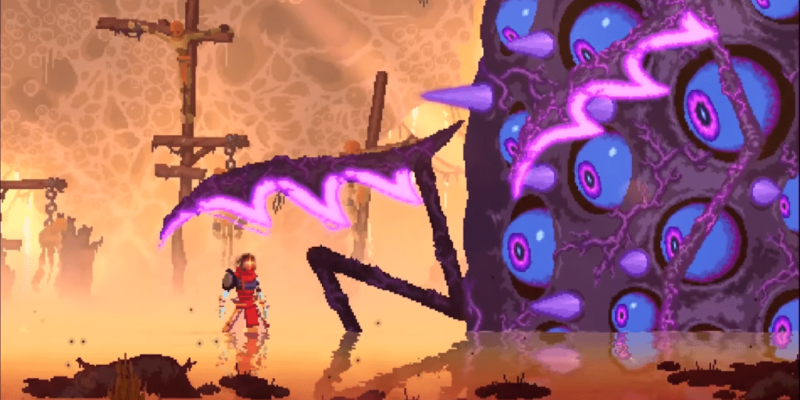 At this point, it’s pretty hard to avoid the topic of Dead Cells. For starters, the game has sold more than 2 million copies (as of May 2019), finding a new audience with its rogue-lite and Metroidvania elements. The indie studio behind the game managed to push it out to just about every platform available. As well, Dead Cells continues to be supported long after its initial August 8, 2018 release date, with The Bad Seed DLC arriving on February 11.

It looks that the release date and trailer for The Bad Seed was mostly a surprise. The trailer dropped earlier today, showcasing what you can expect from the team at Motion Twin and Evil Empire. They also have more news for us coming soon. However, that’s something that is still being held close to their chest according to the company’s public relations firm. From what they’ve announced, the new content promises new biomes, weapons, and a not-so-nice new enemy.

Worry not, traveler. It looks like the game will handsomely reward for returning to it. Completing the new content will earn you a “conceptually unique armoury, including the first double slot weapon.” It looks like a new friend can tag along with you, too, as a “very dedicated and loyal mushroom companion” has also been added.

Get your copy soon

For those curious, the pricing for Dead Cells: The Bad Seed DLC won’t exactly break the bank. It’s been confirmed that the price across all platforms (PC, Xbox One, PlayStation 4, and Nintendo Switch) will be $4.99 USD. The Steam page for The Bad Seed DLC isn’t updated with pricing as of yet, but, you can add it to your Wishlist if you please.

Northgard’s latest DLC adds the formidable Clan of the Ox

By A.K Rahming21 mins ago
Hardware