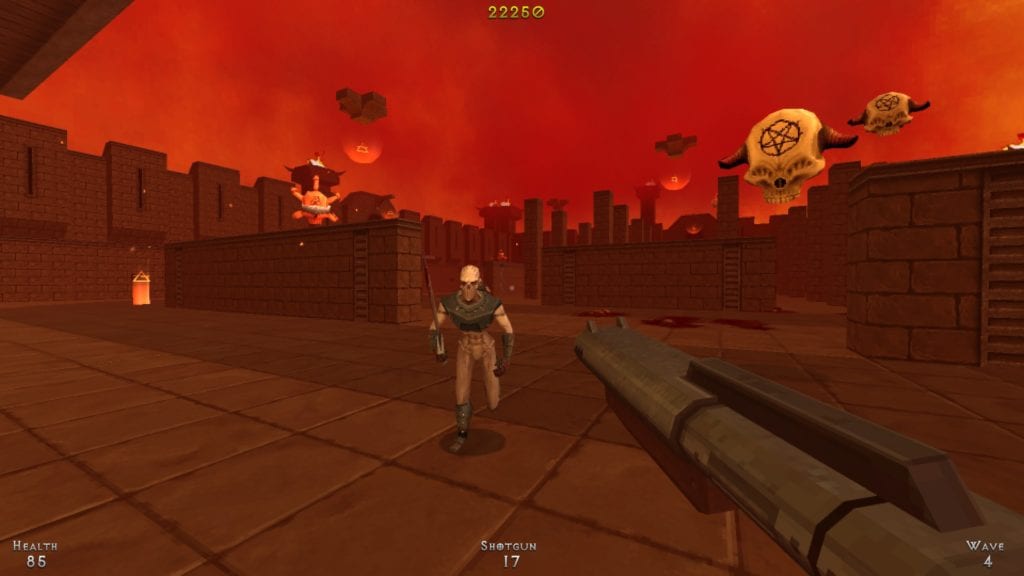 This year has seen the glorious surge in popularity of retro-style first-person shooters. With titles like the controversial Ion Fury, the critically acclaimed Amid Evil, and the mystical Dusk, the genre of retro-revivals is becoming majorly crowded. Nevertheless, publisher Digerati and developer DoomCube have decided to try their hand at the genre with Demon Pit — a single-player arena shooter Hell-bent on bringing elements of Quake and Doom to the modern era. 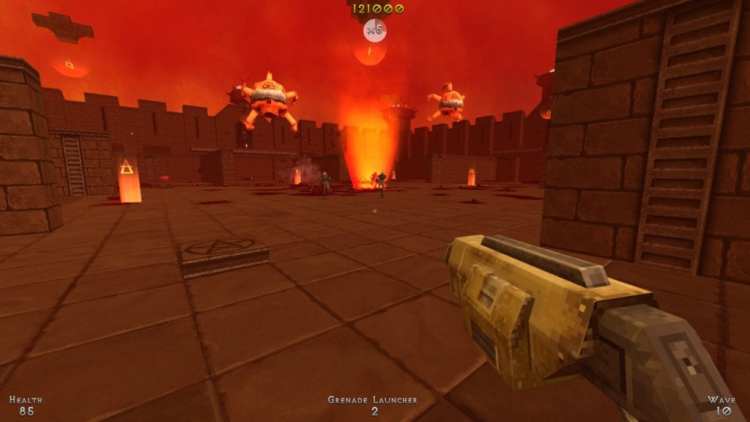 Can Demon Pit‘s modern feature-set set itself apart in a genre crowded with retro revivals? Or has the nostalgia of the ’90s aesthetic finally worn off?

A Hell-thy dose of simplicity

Unsurprisingly, Demon Pit drops the player into a pit of demons — no other context needed. There aren’t any complex characters, narrative twists, or cheesy dialogue, but there doesn’t need to be. Instead, Demon Pit gets right to the action, asking the player, “How many of us will you vanquish before we tear your soul apart?” In this way, Demon Pit makes its intentions clear: to punish the player with increasingly difficult waves of demons à la Devil Daggers.

In fact, Demon Pit is a lot like Devil Daggers. From its floating skull enemies to its global leaderboard ranking system, it’s clear where DoomCube got its inspiration from. However, where Devil Daggers excels in its total simplicity, Demon Pit adds a bit of variety to its stages. This includes a point-based health system, morphing terrain, and different weapon types. 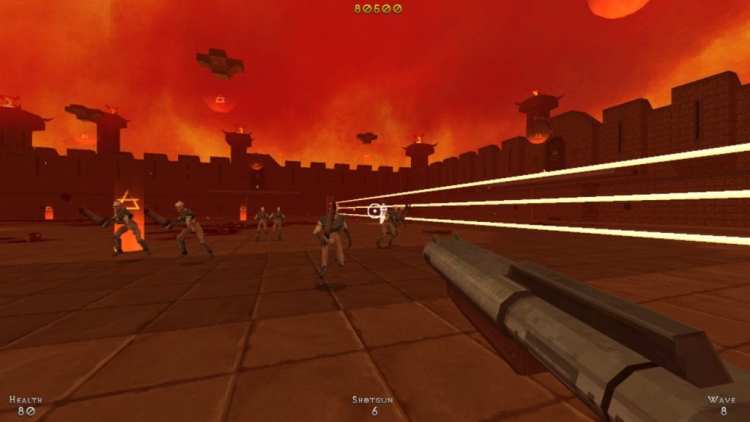 The player will have to dodge moving lasers and lava pits that pop up every so often.

Perhaps the most notable change in Demon Pit is its “wave” system. Players will start off in wave one armed only with a pistol and will have to claw their way to the top of the leaderboard with an increasing repertoire of weapons — and enemies to obliterate. Each wave slightly alters the landscape of the arena, whether it’s adding devastating laser obstacles, removing parts of the floor to expose lava, or erecting columns crested with snipers. No two waves are exactly the same. Where this fails, however, is in pacing.

Back in the action

Part of the allure of Devil Daggers was its highly addictive tempo where players could instantly hop right back into the action. In Demon Pit, the pace is bogged down by the transition between rounds, leaving most runs in the 10-30 minute range. This slow pacing absolutely tanks Demon Pit‘s replayability. After a successful run, you are left exhausted, knowing you must replay the exact same rounds you just slogged through. I wouldn’t say that Demon Pit is especially boring, but I was markedly frustrated when my longest run ended and I realized I would have to replay that entire hour if I wanted to beat my score. 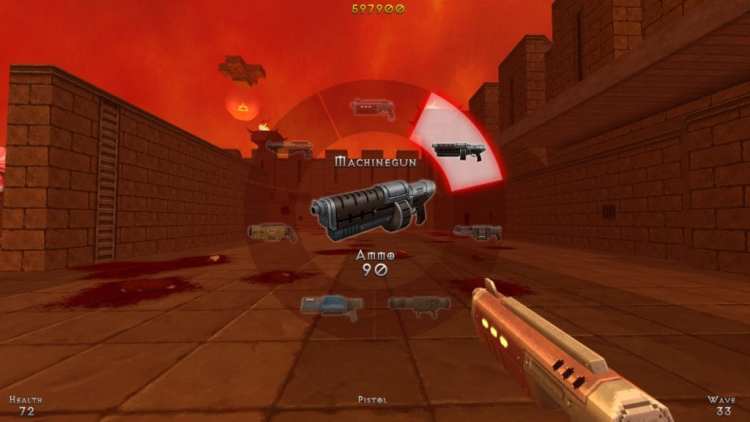 Weapons serve to add depth to gameplay that is otherwise quite run-of-the-mill. Certain weapons like the grenade launcher and the flamethrower feel weighty and satisfying. Meanwhile, the shotgun and machine gun allow players to quickly rack up their point multiplier by slaying multiple demons at a time.

Unfortunately, only a few ammo pickups are dropped at the beginning of each round. It seemed like I was almost constantly out of ammo in everything but my measly pistol. Certain enemies are more vulnerable to certain weapons, which provides some incentive to hang on to your precious ammunition. But, at the end of the day, you can kill every enemy using the pistol — which will ultimately be your primary demon-slaying tool.

Mechanically speaking, Demon Pit feels, again, very similar to Devil Daggers. There’s the same floaty, low-gravity physics that help you squeeze through gaps in groups of enemies. But Demon Pit also includes a point-to-point traversal system that allows the player to avoid particularly sticky situations. The different grappling points are stationary in the arena and offer a momentary reprieve from the demon swarm. Zipping around the map grants the player momentary invincibility and offers access to four health packs placed on each of the arena’s walls. 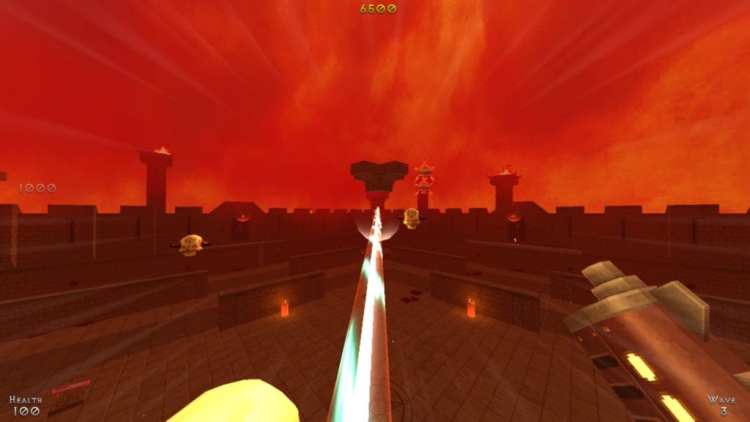 Grappling offers an opportunity to evade enemies while at the same time pulling off some sick air.

The more I played Demon Pit, the more I realized that the key is to just keep on moving. Range-based enemies aren’t able to lock on to the player when they move around the map, and there aren’t any melee enemies speedy enough to keep up. Conversely, your weapons (especially those that are projectile-based) are much harder to place accurately when moving around, something that’s incredibly important when ammo is in such short supply. Ultimately, this boiled gameplay down to a tedious sequence of circling the map and spamming the unlimited ammunition of my pistol at distant enemies. Sure, you can web-zip around the map while lining up trick shots and forcing yourself to the edge of your seat. But that surely isn’t the most effective strategy.

I was able to come within 15 rounds of DoomCube’s record on the leaderboard (on my second attempt, by the way) by almost exclusively using my pistol to pick off enemies from a distance and gallivanting around the outskirts of the arena. 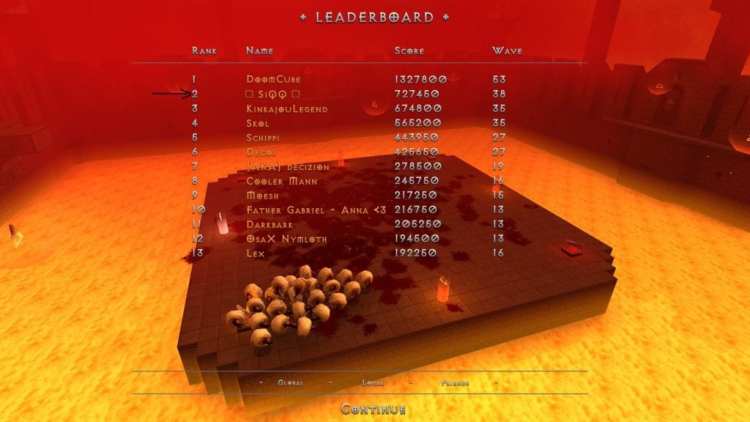 Just a few short hours of gameplay landed me at #2 on the leader board (albeit pre-release). Think you can top my score?

This is where my real problems lie with the gameplay of Demon Pit. While there is some pretense of depth with the various enemy types and weaponry, the fact of the matter is that Demon Pit is extremely one-dimensional. There isn’t any real strategy aside from rationing health packs and ammo. Even that is thwarted by a low level of difficulty. Where Devil Daggers invites the player to get better at the game, Demon Pit is all about cheesing your way through. Maybe I would be more inclined to take risks if it wasn’t for the length of time required between runs. Even so, reaching the top of the leaderboard doesn’t feel especially rewarding.

What year is it again?

Seriously, I only ask because the technical limitations of Demon Pit are archaic. First off, I should mention that even though I’m playing on a 144hz monitor, the game is permanently locked at 60fps. Though, even if the framerate wasn’t locked, I wouldn’t have been able to hit anything higher. Even on the lowest graphics settings, I was met with almost constant drops to 40fps. This blatant lack of optimization haunts Demon Pit, as aiming becomes near impossible when too much is going on in the arena. For a twitch-based arcade shooter, accurate mouse movement is an absolute essential – and it’s a category where Demon Pit completely flops.

Not to mention the single-song soundtrack which repeats over and over again as you progress. It would have almost certainly been better to just not include music at all, and I found myself turning the music volume down entirely to preserve my sanity.

Sure, Demon Pit is mechanically sound, and it has some semblance of a solid game hidden underneath. But its hodge-podge of half-baked ideas leads to gameplay that feels more tiresome than thrilling – particularly when there are other games that just do it better.

Demon Pit sets out to refine the arena shooter genre with a '90s FPS aesthetic, and it succeeds at that. Unfortunately, it doesn't do anything to set itself apart from the rest of the pack. Horrid pacing, a lack of content, and a glut of performance issues leave a lot to be desired, especially when Devil Daggers perfected this formula back in 2016. This is a tough sell to anyone but hardcore fans of the old school aesthetic, though I'm not sure if even nostalgia can save this one.

GolfTopia lets you design the ultimate and craziest golf courses