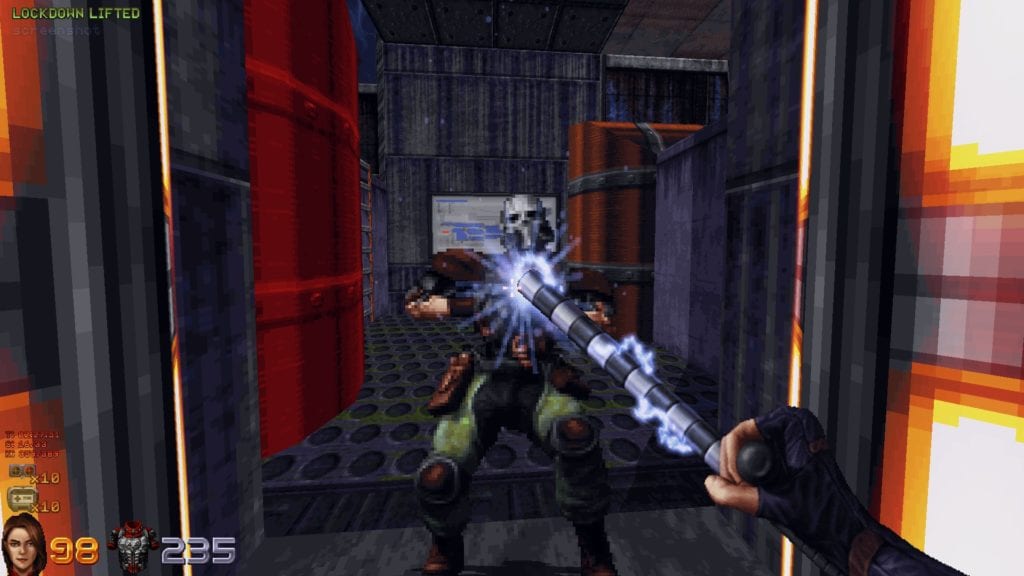 This old-school FPS renaissance we’re in has been a treat so far. Almost all of the developers, understandably, made their games in modern engines and implemented retro graphics. That wasn’t good enough for the people at Voidpoint, though. Instead of using a modern engine, they made Ion Fury in the Build Engine, making it the first game in 20 years to use it. While it’s easy to admire that kind of dedication, does the game sit comfortably alongside the classics, or is it just a nostalgia-driven gimmick?

Ion Fury runs on the EDuke32 fork of the Build Engine, so it’s not like it runs on something completely identical to the original engine. If you’re wondering if the people involved are even deeply familiar with that engine, that’s a giant yes. The game’s director designed that fork to begin with. He brought this game to life with others who have worked on Duke Nukem 3D mods and who understand the engine inside and out. And it really shows.

Ion Fury stars Shelly “Bombshell” Harrison in a prequel to 3D Realms’ game Bombshell. That game was originally meant to star Duke Nukem, but with Gearbox holding the rights, they went ahead and put Bombshell herself in as the lead. She dates back to planning and concept art from Duke Nukem Forever, so they decided to accompany the game with its own retro tie-in. Only — it didn’t do so well, receiving a poor response from both critics and fans. Instead of releasing close to that same game or just throwing in the towel, the team doubled down and massively increased scope in order for it to stand on its own. 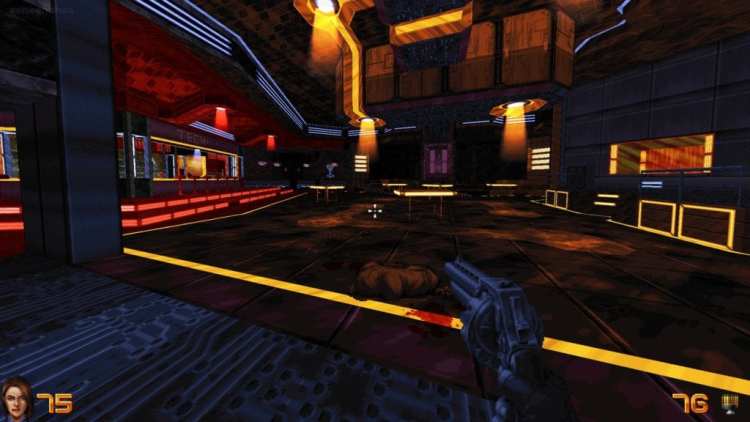 That’s not quite what I meant by “tear up the dance floor,” but okay.

The setup is fairly simple. Bombshell is the new leader of the Global Defense Force after every previous leader has been taken out by Jadus Heskel, owner of a cybernetics conglomerate and evil cult leader. At the start of the game, she’s having a drink at the club Illuminaughty when she’s attacked by members of Heskel’s cult. The game’s story sees her taking the fight to Heskel, one henchman at a time, and it’s a wild ride.

To build or not to build

I was a bit skeptical of Ion Fury prior to getting my hands on it. I didn’t see the point of making a game in the Build Engine, nor did I see why such a mediocre game needed a prequel. But the team at Voidpoint not only made a really fantastic game, but they’ve also made one of the best first-person shooters ever. They’ve nailed almost everything that’s great about the genre while taking a somewhat different route from their inspiration.

To start with, the gameplay is excellent. Movement is fast and fluid, everything is totally responsive, and the experience is fun and satisfying. The weapons all feel exceptional to use, with plenty of different uses based on circumstances. Whether you’re scoring violent headshots with your trusty Loverboy magnum, blasting enemies with your shotgun, setting them on fire with a submachine gun that shoots flaming bullets, or blowing them to pieces with a rolling bomb, the arsenal is just great. They all have secondary uses as well. 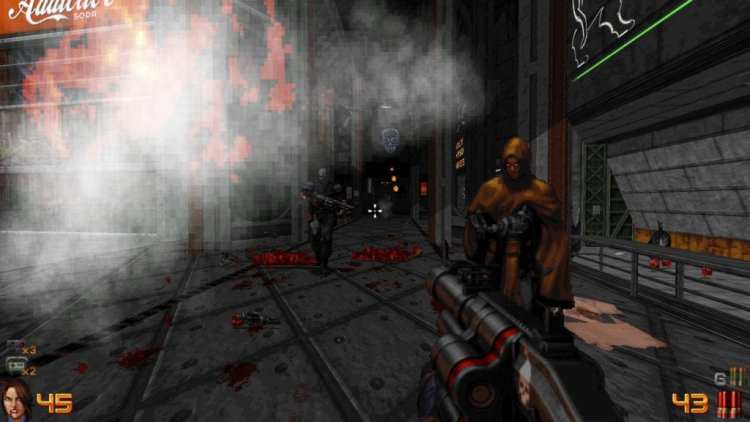 Nice night we’re having, eh? Well, for me. Not for you. You’re about to be a crumpled heap on the floor, but you get what I mean.

The only issue I have with the weapons is that the submachine guns and chaingun feel a bit redundant, as they mostly achieve the same thing. You can dual-wield the submachine gun, so it’s not like they lack the rate of fire or damage compared to the chaingun. This is a very minor quibble with a great set of weapons, though.

The enemies are similarly fun to fight, even if there are some issues with variety. For the most part, you’re constantly pitted against the same three enemies throughout the entire game. These are the revolver cultists, the shotgun and grenade soldiers, and the bow cultists. You’ll find these three basically everywhere you go and they make up the bulk of the enemy force. Ion Fury takes a bit too long to introduce new enemies as the game goes on. When it finally does, they can be rather intimidating, but they’re mostly used as special enemies that you’re meant to fight one at a time. It isn’t until later in the game that it throws multiple of these at you in a single scenario. This lack of variety is the game’s biggest weakness.

But the real star of the show is Ion Fury‘s level design. The game’s levels are big, impeccably designed, and packed with well-hidden secrets. There’s a ton of variety to the locations, and they’re all memorable and have a believable sense of place and feel lived-in. This game seriously has some of the best level design I’ve ever seen. It’s rare for me to just stop and mindlessly explore levels in an FPS as I have here. And many of the secrets are just really hard to find but very satisfying to finally figure out. Secret-hunters are going to have an absolute field day with these levels. 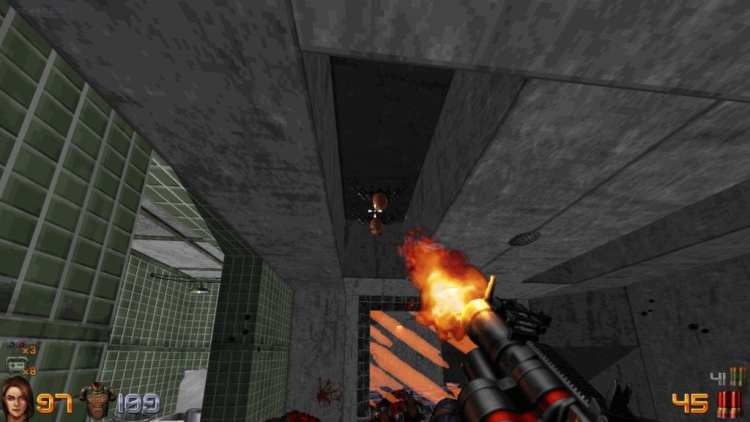 DID SOMEBODY CALL FOR AN EXTERMINATOR? No? Well, you’ve got a cybernetic spider head infestation, and it’s not pretty.

Unlike most other old-school FPS games, Ion Fury throws out the episode and individual level structure. Instead, the game is made up of seven big zones made up of multiple connected levels. You don’t end most levels by hitting a button or anything, but by simply walking through a hallway, riding an elevator, or similar things. The game then pauses for a brief second to load and you just keep going. This makes the areas feel especially huge and detailed, and it was a great choice.

Ion Fury’s visuals may technically be dated, but they’re expertly rendered. The weapon sprites all look amazing and the enemy sprites pack a lot of personality and detail. The levels themselves likewise use lighting and color terrifically. The color palette for the walls and floors is mostly muted with a lot of blues, browns, and greens, but it gives the game a unique look that’s all its own and contrasts with how well-decorated the game can be. The levels are also drenched in detail, with looming distant buildings, humorous posters, and unique assets all over the place. Much like other Build games, there are plenty of objects rendered in voxels too, which I’ve always been especially fond of.

The game’s difficulty is also solid. Enemies can be quite tough, but constantly staying in motion is the key. None of them use hitscan attacks and all of their shots have trajectories and visible bullets, so everything can be dodged as long as you’re on the move. Some enemy attacks seem to do a bit too much damage, however. The bow cultist can kill you with a single charged attack if you get hit by the whole volley. This makes sense because their bow attacks are just as strong as yours, but the enemies with pistols and shotguns don’t seem to do as much damage as you do, which feels a bit weird. 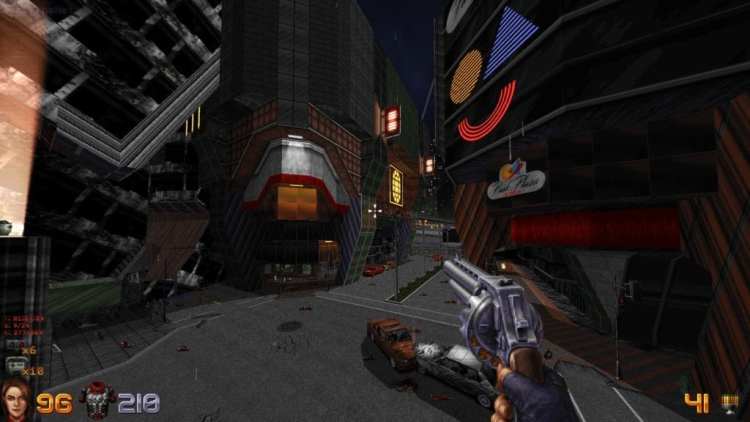 Nothing beats a night out on the ruined, evacuated town.

But even if you don’t quicksave around every corner, Ion Fury is more than generous with its supplies. Health and armor pickups are all over the place, so while it’s easy to die if you get surprised, the game is perfectly doable by solely utilizing checkpoints. You can also carry up to 10 medkits that heal some if things get dicey, and you find these fairly often too. And then there are power-ups to find occasionally, such as shoes that give you a double jump, an item that grants you infinite extra-powerful bombs for 30 seconds, and a 30-second damage increase.

One thing of note is that Ion Fury seems to be the longest old-school style FPS I’ve ever seen. With deaths, quickloads, and some secret hunting, the zones might easily take some players a few hours each. And there are seven of them. I played the game very slowly, frequently loading to retry encounters in order to get through them taking the least amount of damage and using the least amount of ammo possible. I would frequently just stop progressing and wander the levels to try and find every last thing I could since they just beg to be explored. All in all, the game took me hours and hours to get through, which I didn’t see coming. I’d imagine anyone playing through the game at a standard pace to be able to finish it in less time than me, but that’s still a long FPS.

Ion Fury is a wonderful game that needs to be played by everyone who enjoys old-school FPS games. It plays extremely well, has some of the best level design I’ve ever seen, and looks great. There are also reasons to come back, having four difficulty levels with different enemy layouts and much higher speeds, and even additional modes. There’s a queen of the hill mode where you fight waves of enemies with the chaingun and a mode that lets you go through the game’s preview campaign with 25% health and infinite bombs. The game is an extremely impressive accomplishment and an absolute ton of fun to play. I sincerely hope this isn’t the last we see from Voidpoint.

Ion Fury may look like it plays it safe, but it delivers an exemplary first-person shooter that's better than many of the games that inspired it. Genre fans will be missing out if they choose to pass this one up.

Oh hey, Biomutant will also get a $400 Atomic Edition