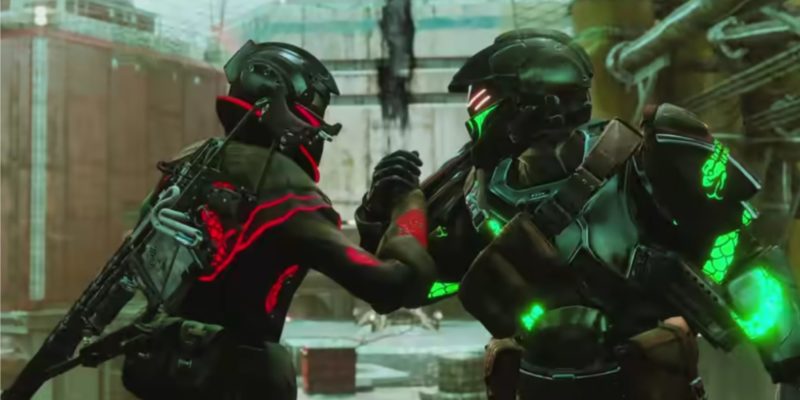 Destiny 2’s Joker’s Wild DLC — aka. Season of the Drifter — has a gameplay loop that revolves around Gambit Prime and The Reckoning. We’ve mentioned these in our basics guide before, but this time around we’ll take a more in-depth look at the various activities included in Joker’s Wild. For this guide, we’ll look at the Drifter’s newfound pastime, Gambit Prime. We’ve included some tips to make your experience all right, all right, all right. Newcomers to Destiny 2 or non-Gambit aficionados could also check out the video below from Bungie detailing some unique mechanics in Gambit Prime.

Also, don’t forget to check out our main page for Season of the Drifter guides. We’ll keep updating it as more content drops.

Gambit might be one of the most hectic activities in Destiny 2, and Gambit Prime ups the ante. Gambit’s all about killing mobs, picking up motes, banking them to send blockers, invading to kill opponents, and killing your primeval (boss). In Gambit Prime, however, there are a few key differences:

The most important tip, if you truly wish to achieve consistent success, is to find decent teammates. The Destiny 2 app has an LFG feature, and there are numerous sites/subreddits and even Discord servers that allow you to find teammates. Far too often, you might encounter randoms that mess up or those who lack coordination. Having a team that can communicate effectively sets you up for smoother runs.

Tactics also come into play. For instance, you’ll want to wait until the enemy team banks first in a match. Kill those blockers quickly so you can bank together as a team (and therefore drain motes from your opponents’ score). You’ll also want to coordinate when a teammate has to invade — it’s a waste to send an invader too early when the enemy team isn’t even carrying a sufficient number of motes.

Completing bounties from the Drifter, or certain actions during a Gambit Prime match (ie. killing high-value targets, banking lots of motes) will award you with synths. These can be used later in The Reckoning activity to obtain Gambit Prime armor sets. Check out our Reckoning guide here.

You’ll want to maximize your efficiency when cycling between Gambit Prime and Reckoning activities. as such, we also have this leveling guide for you which has some tips on which activities/rewards to prioritize. 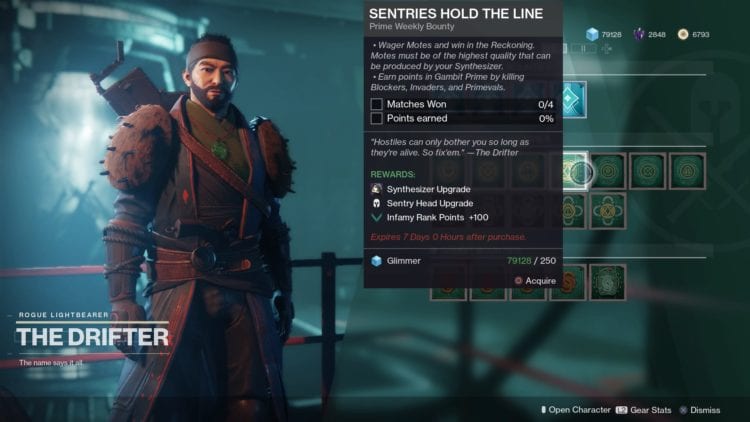 The Drifter has a lot of bounties you can choose from. Do note that weekly bounties that offer helmet upgrades can only be completed one at a time.

The main objective is to bank 100 motes and then kill your primeval. These bosses are Taken giants ranging from hobgoblins, wizards, knights, and more. These primevals are shielded and you’ll need to kill the envoys accompanying them so you can start DPSing.

Two envoys will appear first and they’re marked on your map. Depending on which area of the map they spawn, a third will also appear once the first two have been downed. Killing this third envoy will break the primeval’s shield while dropping a glowing white circle that buffs your damage. You can dip in and out of this circle for the buff.

You’ll also get invaded fairly often while you’re fighting your primeval. Make sure to avoid any deaths since that’ll heal your boss. Also, you’ll want to wait until the invader has been dealt with before killing the third envoy. That way you’re in the clear once you begin your DPS phase.

Some great weapons to use: 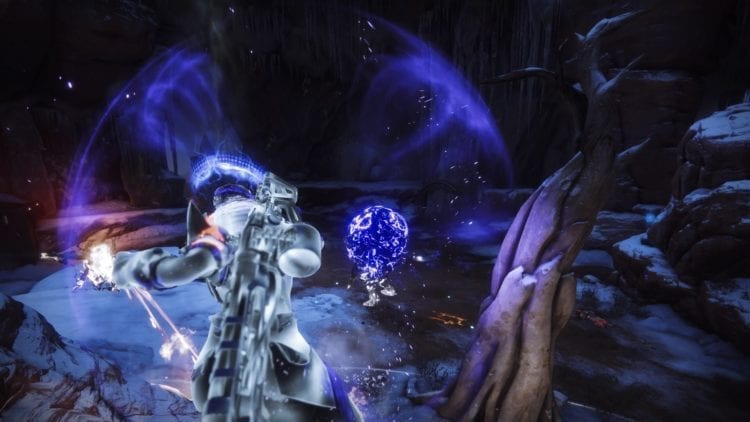 Gambit Prime isn’t a sprint, it’s a marathon. Still, you’d need a decent team composition or class picks to get the job done properly. Here are some tips:

Hunters – A Nightstalker with Orpheus Rigs offers utility bonuses for your team due to massive orb generation and continuous supers. If you have more than one Hunter, then the second player should use Golden Gun while having the Celestial Nighthawk equipped.

Warlocks – Warlocks are perhaps the best choice for team compositions. All three subclasses offer great benefits. If you have only one Warlock, then it should be someone using Nova Bomb (top tree) with Skull of Dire Ahamkara. This exotic helmet ensures that you regain your super almost instantly as long as you kill a couple of majors and some extra mobs. If you have multiple Warlocks, then the Stormcaller’s Chaos Reach (with Geomag Stabilizers) and the Dawnblade’s Well of Radiance (with Phoenix Protocol) will help immensely. 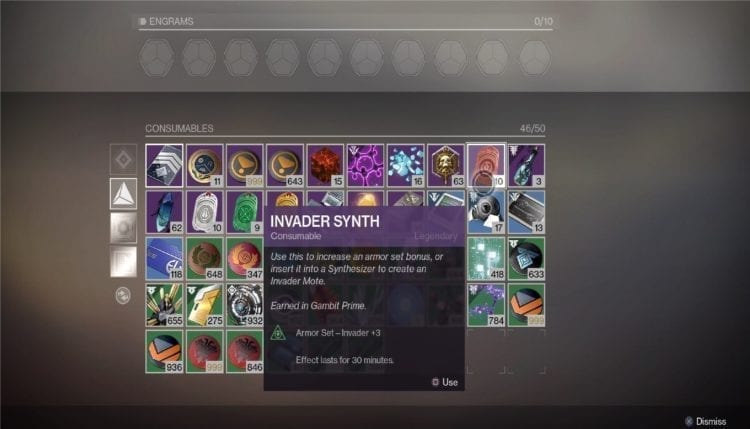 Completing bounties and certain actions during a match provide you with synths. Using these would grant a 30-minute perk bonus depending on the role.

Beyond the regular Destiny 2 class choices, Gambit Prime is also about fine-tuning your role or archetype. There are four specific roles that you can choose from depending on your playstyle. Do note, however, that certain roles are very useful and others would make you scratch your head.

Each role also has a corresponding armor set that you can complete with certain tiers providing bonus points to unlock perks. As mentioned earlier, you can obtain these armor pieces from The Reckoning.

You unlock perks when you have 3, 6, 10, and 15 points. Additionally, you can pop a synth to add a +3 bonus to a certain archetype. This buff lasts for 30 minutes. Let’s say you’ve got five tier 3 Reaper armor pieces, that means you’ve got all the Reaper perks active. If you use a Collector Synth, you’ll temporarily have the +3 bonus for the Collector set as well. You can also mix and match to get different sets of perks to fine-tune your style of play. 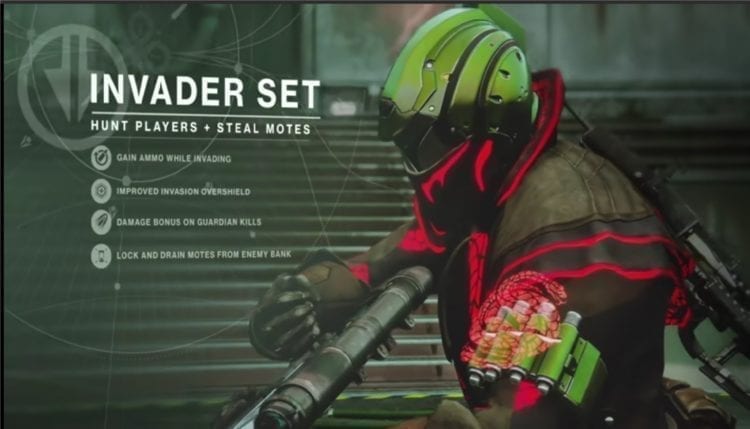 The Invader is getting ready to wipe out the enemy team!

Invaders should be PvP pros since they’d be the ones taking out opposing Guardians. Weapons such as Luna’s Howl/Not Forgotten, along with snipers, machine guns (Thunderlord, Hammerhead), or the Jotunn exotic fusion rifle are top choices.

The Invader set has perks that completely synergize with one another making it devastating in the right hands. Locking the enemy bank when you invade is also a godsend since some invaders lose a few seconds trying to get in position, all the while opposing Guardians might already end up banking. 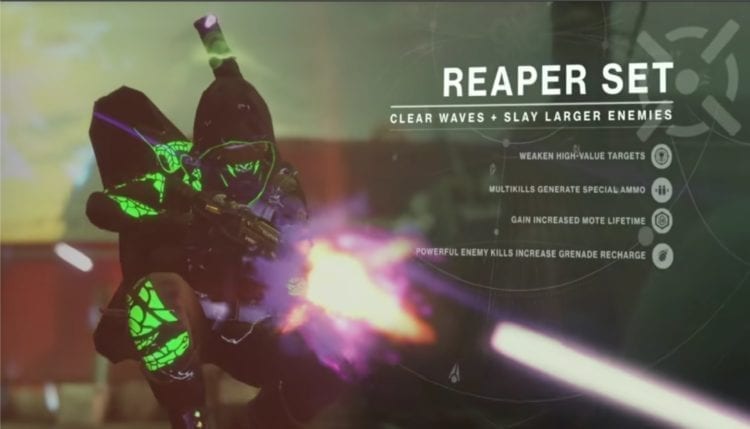 The Reaper is firing on all cylinders!

Reapers are your dedicated mob-killing machines. You’ll want to pick this role/archetype especially when you have powerful shotguns and crowd-clearing supers (Nova Bomb, Blade Barrage, Hammers).

The first two Reaper perks are amazing in their own right that they make the latter two unnecessary in comparison. Debuffing enemies just by damaging them, and providing more special ammo (feeding your shotguns, fusion rifles, and snipers) are very helpful support perks to have. 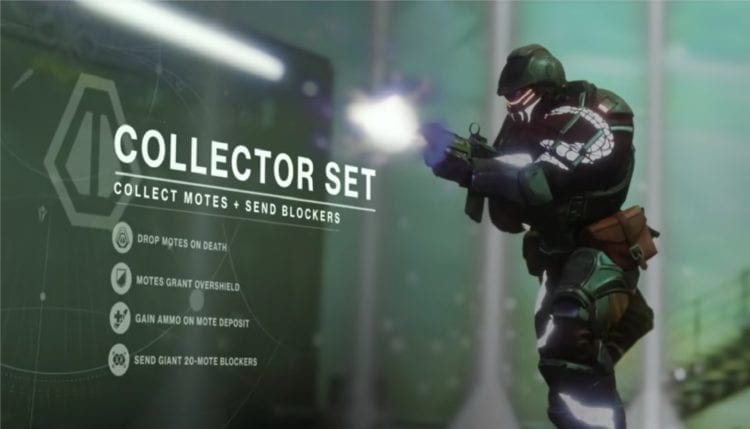 The Collector enters the fray!

Once the Reaper has cleared out entire packs of mobs, it’s time for the Collector to swoop in and start grabbing every mote they see. Technically, the Collector role almost seems unnecessary since Gambit has “primed” most players into picking up motes they see on the ground. The question is whether they’re coordinated enough to realize that other teammates might need an extra mote more than they do.

Outside of the +6 perk (Umbral Armor), the Collector set is almost underwhelming. The +15 perk (High-Yield Savings) might have some use, but it’s also extremely risky especially when opponents have ruthless invaders. If you’re getting benefits out of the first perk, that means you’re dying and you’re doing it wrong, Guardian. 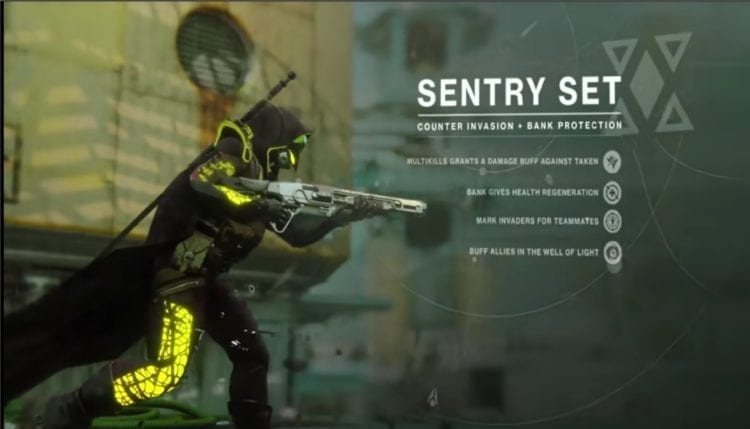 The Sentry taking a stroll… okay…

The Sentry is probably the most useless role out of the entire bunch. Anyone can drop what they’re doing to head back and kill blockers. If you do want to pick this role, please have some solar weapons ready since those Taken knight blockers have solar shields.

Oh my, look at those perks! None of these bonuses actually feel like they matter! I’ve tested the +3 perk and it almost seems like a waste. You can’t even maximize the buff’s usage during the primeval fight since all the mobs are Taken (clearing the stack immediately). You’re not going to need health regen too much unless you’re having trouble with blockers. A Well of Radiance or a Rift would be enough for DPS phases; you won’t need to waste your armor slots for the +15 perk.

Lastly, what’s up with that +10 perk? The only thing it does is mark an invader — which is of no consequence since:

Okay, maybe I was exaggerating about the Sentry set being useless. It does have some use. You can waste Sentry synths/motes as fodder for your synthesizer when you want to farm weapons in The Reckoning.

You can also farm for curated weapons in Gambit Prime. These are fully masterworked with specific rolls dictated by Bungie. After several days of wondering if everything’s just random or if there are any actual specifications, we finally have a clear-cut answer all thanks to Reddit user RegisteredVexOffender. The video above and the write-up that adds more detail is all thanks to the user.

For starters, you can get one extra synth per game depending on your actions. If you’ve obtained a particular synth, you cannot obtain another one for a different role. As for curated weapons, they’re tied to the synths you obtain. It’s completely random (RNG) which means you could get an Invader synth for a team-wipe, or the curated weapon itself.

All of these mean that you’ll need to stick to a particular role throughout the match until such time that you receive either a synth or the curated weapon itself for that role. Here are the steps for each of these weapons/synths:

There’s only one map at the moment for Gambit Prime and that’s New Arcadia. You can expect a new map in Titan (Deep Six) on March 12 once the weekly reset happens.

Devil May Cry 5 Performance Takes A Hit From Denuvo DRM

Week In PC Game Releases: The Division 2 Dives In