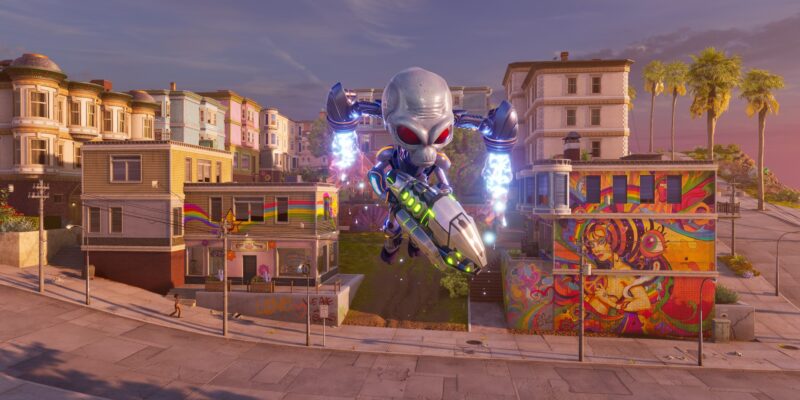 The THQ Nordic 10th Anniversary Showcase opened with a bang as Destroy All Humans 2 – Reprobed was announced by Crypto, rocking out to Rammstein. As the hippies would say, it was a trip. This time around, the bulbous-headed slayer of humanity is laying waste to the people of the ‘60s. And not just in America, but all over the world. Godzilla even made an appearance in the announcement trailer.

You can check out the new Destroy All Humans 2 – Reprobed cinematic announcement trailer down below. The YouTube descriptor tells us that Crypto wants to take revenge on the KGB for destroying his mothership. But I think he’d take any excuse to kill more humans.

In Destroy All Humans 2 – Reprobed, you’ll get to explore 1960s Mother Earth and observe the oddness of human behavior. The map is much larger than before, which means you have a lot more ground to defend.

During your mission, you’ll probe brains, gather intel, infiltrate society, and then kill everyone with an awesome arsenal. Crypto will wield his classic weapons, as well as some new technology like the Meteor Shower. You’ll also be able to hop into your spaceship to blow up buildings and hoover up some test subjects. You can grind these up into DNA cocktails and use those to upgrade your skills. But there’s a twist this time. You’re going to need to form alliances with the detestable humans. Awkward.

If you want to share the joy of killing humans with a friend or loved one, you can also play Destroy All Humans 2 – Reprobed in local two-player split-screen co-op.

No release date was announced for Destroy All Humans 2 – Reprobed. However, the Steam page is up already. So, you can add it to your Steam wishlist if you’re eager to hear more about the game. And don’t forget, THQ Nordic is giving away two games for its 10th Anniversary.