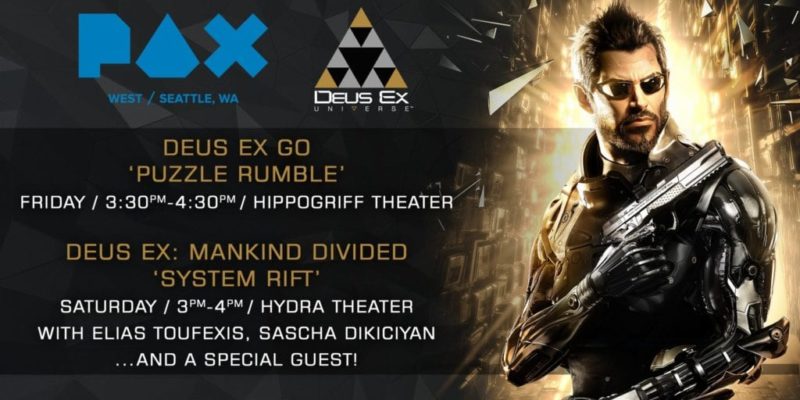 This announcement probably won’t make any friends for Square Enix, but Deus Ex: Mankind Divided’s ‘System Rift’ DLC will be coming on 23 September. It’s one of the pair of missions included in the $30 USD Season Pass, and will appear under the ‘Jensen Stories’ section of the main menu.

Where it fits into the game’s story isn’t really obvious with the information currently available. System Rift will involve Adam Jensen hooking up with old pal Francis Pritchard (confirmed to be the same voice actor as Human Revolution), and investigating the Palisade Blade. “In agreeing to help, Adam may also be able to uncover hints as to who the Illuminati really are,” the announcement adds.

The Palisade Blade is the huge data storage facility towering over Prague (not to be confused with the Palisade Bank which, while a great level, would count as some serious level recycling). System Rift will cost $12 USD as a stand-alone, which, considering it’s one of only two things that look interesting in the Season Pass (the other being second story DLC ‘A Criminal Past’), makes that Pass look like terrible value for money.

Whether ‘System Rift’ is worth that price, time will tell. Square Enix’s DLC and microtransaction decisions for Deus Ex: Mankind Divided have left a lot of people feeling awfully jaded about the title (unfortunate, since outside of all that publisher-mandated rubbish it’s a fine game), so any add-ons are going to be viewed with some understandable cynicism.

Call of Duty: Infinite Warfare multiplayer gets a pair of trailers