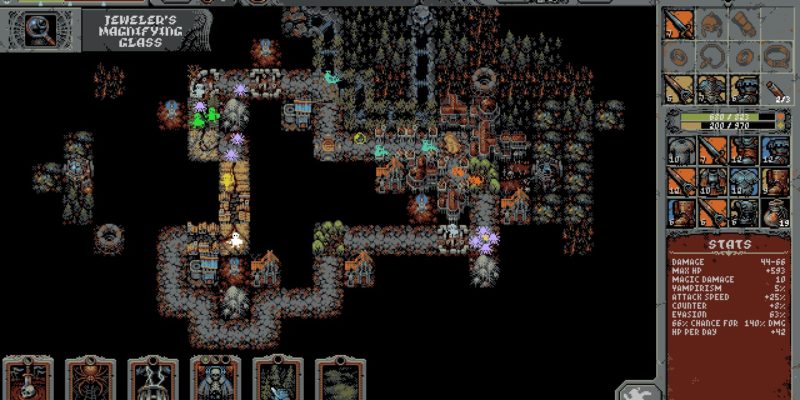 Devolver Digital showed up to reveal Loop Hero during The Game Awards pre-show tonight. Loop Hero is a retro-style fantasy romp, with plenty of pixels and worlds to explore. The game was shown only briefly in a criminally-short trailer, but we were able to check out how it looks. Loop Hero will release on PC in 2021.

Developed by Four Quarters, Loop Hero has a lot going for it, but your main drive here is to go out and kick some Lich’s ass. The Lich sent the world into an unending loop, and you’re charged with fixing it. Of course. In your way are enemies and guardian bosses to face.

Naturally, Loop Hero is a rogue-lite. I mean, it’s in the name. At the start of each loop, you choose a character class and dive on in, collecting loot as you go along. I imagine you will die a lot in this game, losing your gear in the process. But there will be one aspect that doesn’t feel the harm of the constant cycle. Your survivors’ camp only grows and improves with every run.

The game uses character classes and an interesting card deck system. You choose different classes and a deck of cards before heading out on each randomly-generate adventure. Cards are used to build “your own dangerous path.” On that point, you can also place buildings and terrain. It’s like a choose your own adventure story, but with even more death somehow.

There is unfortunately not much more known about the game. It’s still a bit early, but you can read about all the different features at its Steam page, which just went live. Loop Hero will be available for PC via Steam early 2021.

Shady Part of Me review — In shadows, growing wings

By Sam Robins60 mins ago
Hardware