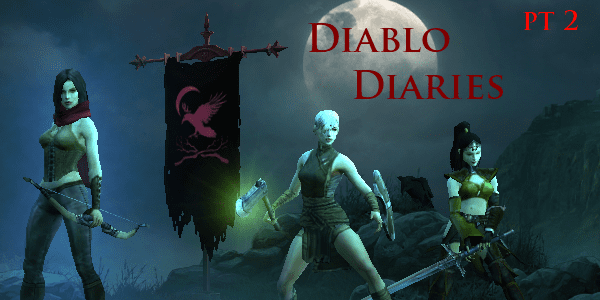 My Bout With The Skeleton King

Chapter 2 – My Bout With the Skeleton King

Today my companion and I had some help. An extra monk and a wizard joined our party and “Diablo’s minions grew stronger”. Our first goal today was to find a crown so we could kill the Skeleton King. After a quick chat in town, during which we realized that three of us had selected the same picture on our banner, we began our journey.

I’ll be honest. Sometimes I forget what our objective is and I’m just following the party killing monsters. On our way I paused and said, “wait… why are we going to a cemetery, again?” So, then my party explained to me that we had to get the thing to do the thing before we could move on. I don’t know if this is a sign of an unmemorable storyline or that as I am getting older I have less attention span for hearing the reason I am killing monsters.

While chatting with my party I learned that not everybody had the same mana bars that I do. The monks had only a single bar while my class had two, hatred and discipline. Today was the first day we used TeamSpeak. That was definitely the way to play. I was able to get information like that without stopping the action.

It didn’t take long to find the cemetery and work our way down into a crypt. Four adventurers fighting their way down a narrow corridor is an interesting sight. There were two monks fighting up front with spells going off and arrows flying everywhere. The screen can look very busy. I stayed near the middle, half way between our wizard and our two monks. When I have a party I’m always more of a mid-range fighter rather than standing all the way in the back with the other ranged fighters. We fought like that all the way to the end of the crypt where we found what we had come for (which also finally unlocked town portals).

After returning to town my companion had to leave for a while. I didn’t want to level up without him so our adventuring halted for a few hours. When I play with a friend, I like our characters to progress together. I hope I won’t ever play that character without theirs. I don’t plan to at least.

The Skeleton King Awaits Our Presence...

When our break ended and we tried to get back online the servers were down again. They went down for about two hours I think. Luckily, we were still breaking for most of that time and we only had to wait a short while before being able to play.

Now we were back to two, only this time, my companion changed to a different character because the witch doctor was a better fit for his play style. We were going after the Skeleton King. It had been a while since I last tangoed with Leoric. I was looking forward to it. We worked our way down the dungeon. I expected to find him on the third level like I had in Diablo 1 but Blizzard decided to add a couple extra floors.

The Skeleton King As He Appeared In Diablo I

He didn’t have much fight. I kept my distance when I could and pelted him with arrows. When he’d blink in my direction to attack I used one of my new skills to jump away and continue my assault. At no time during the fight or any fight I’ve encountered did I feel in danger of dying. I didn’t need a single potion because enemies drop life and he kept spawning trash for us to dispose of which kept our life bars topped off for most of the encounter.

We did it. We killed The Skeleton King (again). Shortly afterward, as if a reward for a fight well fought, I unlocked my first passive skills. The one I selected to use immobilizes an enemy once every several seconds. Then our quest, for now, came to a stop.

Mountains Covered In Ice – Then and Now