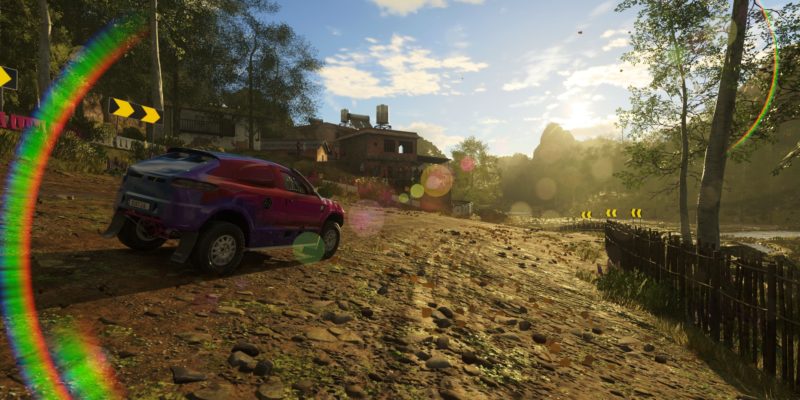 It’s hard to believe we’re already up to five Dirt games. Well, more than that if you count the spin-offs. I guess this is technically the eighth one. While the series has been known to go back and forth between the simulation and arcade genres, Dirt 5 is very much the latter. Not only that, but it’s an extremely kind, enjoyable game that can be played by people of all skill levels. Racing fans looking for something hardcore and extra realistic won’t appreciate many of its choices, but it’s an excellent racing game with beautiful graphics, precise controls, and a plethora of entertaining tracks.

Dirt 5 is quite proud of the fact that Troy Baker and Nolan North are part of its voice cast. For a second, I was a bit worried that there would be a narrative forced into the game, but it’s nothing like that. Troy voices a character named AJ, who is a racer who runs a driving academy. He just says some lines when you start the game and occasionally pops up when you’re on the career menu. There are also a couple of commentators who sometimes share some banter. All of this is infrequent and might as well not be in the game to begin with, but it doesn’t matter. This is very much one of those detached racing experiences.

Honestly though, the dialogue is bland and kind of annoying, regardless of the pedigree behind the voice actors. I’m at a bit of a loss as to why having any of it was deemed necessary in the first place. I like Troy Baker as much as the next guy, but hearing his disembodied voice occasionally only serves to make me go, “yeah, that sure is Troy Baker, alright.” The vast majority of the dialogue shows up when you’re first introduced to each race type, and the two commentators try really hard to be funny while videos of races play. Meh. 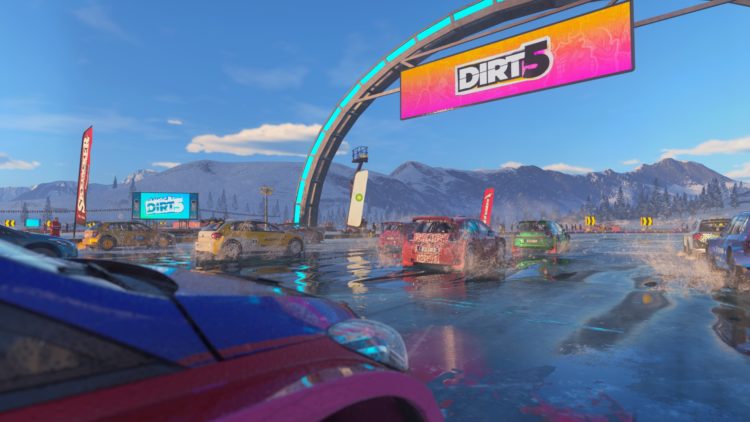 Dirt 5‘s career structure is extremely simple. There’s no team management aspect, no steep requirements, and no delicate car-tuning to speak of. There are more than 130 events in the game spread out over 38 tracks, each with a reverse version. You do an event and finishing it unlocks one in the next row. Each event has three stamps that you can accrue based on how high you place. You get all three for first place, two for second, and one for finishing at third or below. Yes, you read that right. In all of the game’s events, you’re allowed to move on regardless of what place you finish at. Non-standard events give stamps based on score or lap time.

Now, I don’t know about you, but I’ve never seen a racing game that let you completely fail with absolutely no consequences. I mean that too, because there’s no downside to doing badly.  Your rewards are lower, sure, but anyone who just wants to race and have fun can do just that. Honestly, I’m all for it. Sometimes, people just want to drive the tracks and relax, so I think it’s awesome that Dirt 5 lets them do that. Of course, more serious racing fans will possibly feel the exact opposite. However, they can still collect all 375 of the game’s stamps by getting top marks in every event.

Finishing an event grants you level experience, sponsor rep, cash, and items. The higher your level, the more liveries you’ll be able to choose from. Each event in Dirt 5 has certain cars that can be used with it, and each can be customized visually with liveries, colors, and decals. Money is used to buy new cars, and they’re generally quite affordable. Meanwhile, you can choose from a series of sponsors that pay differently. Ranking up sponsors will increase your pay, and each has its own max pay per race. Furthermore, they also have unique rewards associated with ranking them up, so completionists will want to go after all of them. 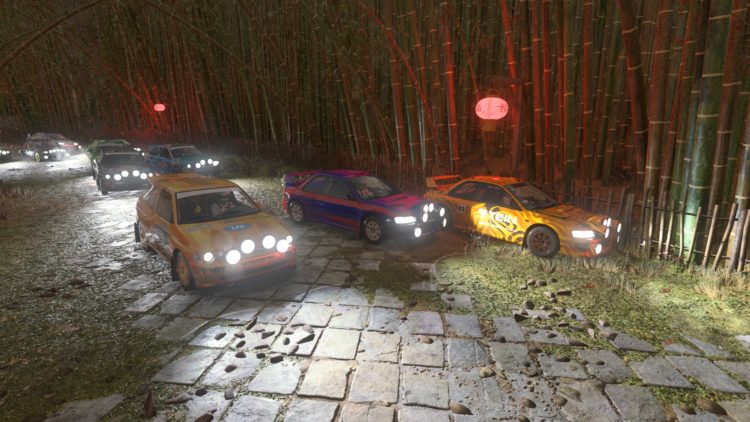 Time to throw down

It’s not all regular events in Dirt 5 though. As you play the game, you’ll occasionally unlock new Throwdowns, which are special challenges where you face off against another racer. Winning these unlock special player card backgrounds. As for the events themselves, there are multiple different types including rallycross, sprint, stampede, solo time trials on really rough off-road paths, and even a stunt-based type called gymkhana. Most of these are regular races against 11 AI vehicles though, so they can feel a bit more repetitive if you’re looking for a game that changes things up more often.

As for those event types, I’m not entirely fond of some of them. The gymkhana events task you with scoring a certain amount in stages set in a stadium by pulling off jumps, drifts, and the like. They’re infrequent, but I’m not so sure they work well with the way the series handles. They’re not bad or anything, I would just rather race. Then there are specific sprint events where you race these weird cars that are mostly meant to make left turns around short, circular laps. These cars are borderline impossible to control and I hate them with a passion. Of course these are real, actual cars, so I can’t fault the designers too much. Plus, you’re more than welcome to skip any events you don’t feel like doing, so you don’t have to bother with anything you don’t want to.

The tracks in Dirt 5 are mostly offroad, as you’d expect. They take place in several locations including China, Norway, and the US. You’ll race on dirt, gravel, the occasional bit of paved road, and ice, too. I hate ice races though. So slippery. The game’s controls feel exceptional though, and they’re as lenient as you want them to be. You can change how assistive the driving is at any time, but even on the advanced setting, the game is way more forgiving than I expected. This game will not please any sim fans. The career mode’s difficulty can also be changed on the menu, although I found the game’s medium setting to mostly be pretty good. The AI doesn’t appear to rubberband and, on medium, is good about letting victory feel within your grasp most of the time while keeping a bit of pressure up. Except on ice stages, where the AI is amazing. Or maybe I just suck too badly at those. 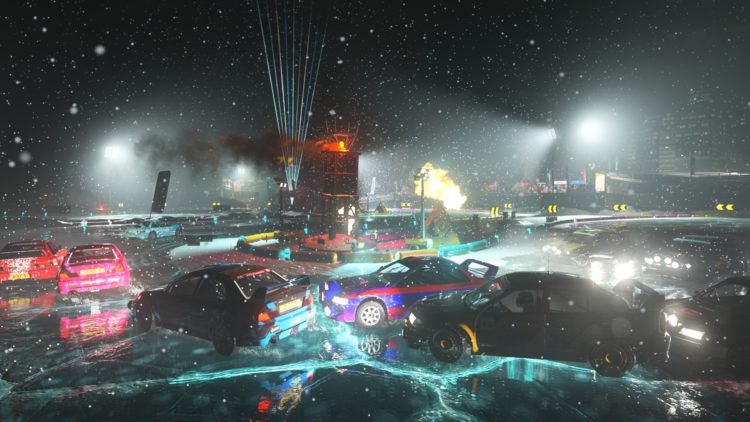 Most of the tracks in Dirt 5 are gorgeous, with wide vistas and lovely uses of color. The tracks also feel different from one another and they don’t get boring even after you’ve dumped a lot of hours in. Speaking of which, this game has a lot of content. The campaign mode by itself can take well over a couple dozen hours, and some players will want to collect all of the medals or max out all the sponsors, so they’ll be aiming to complete the sponsor goals in each event as well. On top of that, there’s a level editor that lets you design your own challenges or play ones made by others. There’s a lot of bang for your buck here. There’s multiplayer too, and the arcade mode lets you race any track you want as well as pick the weather and time of day.

Dirt 5 is a lovely and exceedingly accessible off-road racing game. It doesn’t do much to win over the sim crowd, but anyone who wants to go off-roading on lovingly-rendered tracks set all over the world with cars that handle exceptionally will find a lot to sink their teeth into. I do need to mention, though, that the PC version repeatedly crashed for me, typically after completing an event. I had about seven crashes in just one day alone. Some of the events might not be as fun as others and the near-constant focus on standard racing might bore some people, but this is one hell of an entertaining racing game. 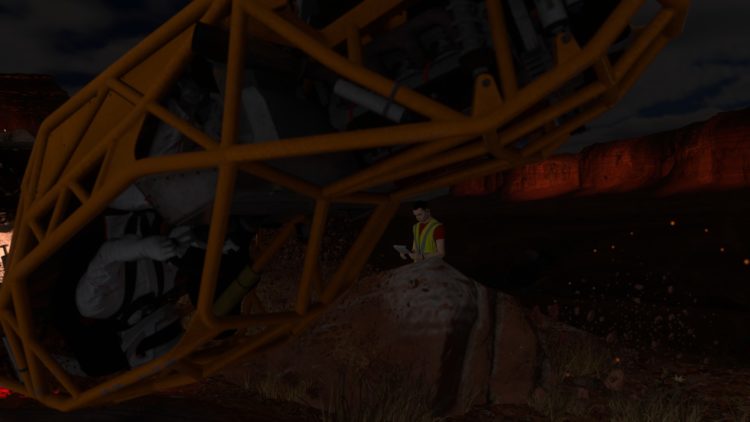 With beautiful visuals, excellent controls, and a ton of content, Dirt 5 has a lot to offer players, especially with how lenient and easy-going the game's structure is.

A Vampire: The Masquerade battle royale is in the works by Sharkmob

By Kurt Perry19 hours ago
Reviews