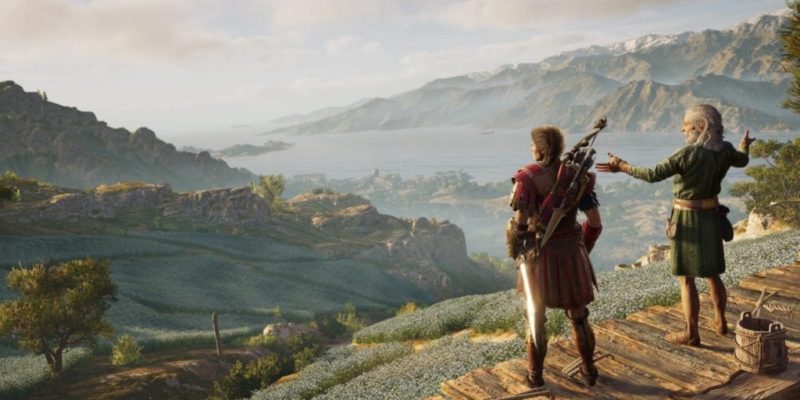 Making a return after its debut in Assassin’s Creed Origins, Discovery Tour: Ancient Greece will take misthios and history lovers alike on a tour of Assassin’s Creed Odyssey‘s beautiful recreation of Ancient Greece through its events and mythology. This mode will come as a free update to all PC and console owners of the game sometime this fall. You can even buy it as a standalone program on PC. As such, teachers, parents, or anyone who wants to explore the history and events of the era can utilize this mode without picking up the full game.

There are a handful of new features in the Discovery Tour for Odyssey that were not seen in Origins. This time around, characters from the game will serve as your tour guides, rather than just a voice over. These guides include Herodotus (considered by many as the world’s first historian) and Barnabas, among others.

For example, in the teaser you can see below, Leonidas himself teaches the player about the Spartan Agoge. This is the ritual that boys must overcome before they can be considered men. It forces them to endure many harsh happenings to shape them into rugged, strategic warriors. The stations where you stop at also have more engaging cinematics than their Ancient Egyptian counterparts. For instance, they move around to show off details and characters to help communicate the lesson to the viewer.

You can watch Ubisoft talk about the specifics of Discovery Tour: Ancient Greece in their E3 2019 stream. It starts around the 25:30 mark of this video.

Discovery Tour: Ancient Greece will have 30 different lessons, and they will be longer in Assassin’s Creed Odyssey than they were previously. Make sure you pay attention. There will be a quiz on the information that you learned at the end of the tour.

As you progress through the Discovery Tour, you can unlock 35 different avatars to play as and 15 horse mounts that you can use to explore the world. Although, truly the best thing you’ll unlock is the knowledge of a lifestyle lost to time. Will you be checking it out?

Get Enter The Gungeon for free on the Epic Games Store