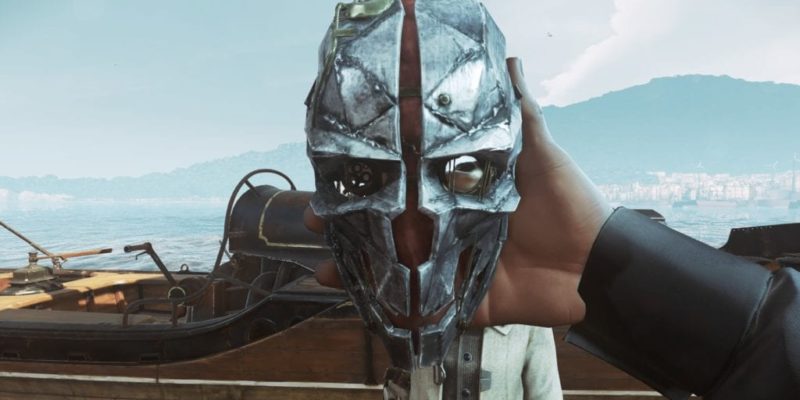 Dishonored 2‘s vaunted patch 1.2 hit last week, with the aim of fixing the numerous technical issues that plagued the otherwise excellent game’s launch and made me give it only a tentative recommendation on the basis of how poorly it seemed to run on so very many systems. As such, it’s only right that I give it a look and see if that aim was true.

I’ve got a fairly mid-range system (i7-3820, 16 GB RAM, GeForce GTX 970). I’ve read a fair few reports from people running it on higher specs, with supercards like the GTX 1080. And then, of course, there are those who are sitting a lot nearer the “minimum” end of the scale. I’m going to do what I can to give you an idea of the impact this patch should have on all three points of the scale – although, obviously, I can speak in the most detail about my own. I’m hopeful that PC Invasion’s deposed empress Peter Parrish will chime in with his own thoughts as to how it hits the slightly lower end of things, too. (Peter: I will indeed; see below for AMD Corner.) 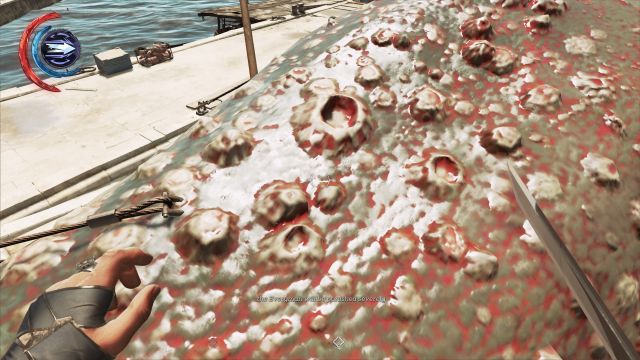 The “lower end of things” probably meaning textures like these, unfortunately.

It’s worth noting that, since writing my review, Bethesda had a looksee at my DXDiag and told me that my video card drivers may have been causing some issues, and that the latest drivers should improve matters. I can’t say whether or not that’s true because I installed the latest drivers at the same time I was messing around with patch 1.2; I didn’t try patch 1.2 with the old drivers, nor did I try the new drivers with the old version of the game. On the other hand, I will say that at review I played Dishonored 2 with the latest drivers that were out at the time.

The quick succession of patch 1.1 and 1.2 fixed a few nasty bugs, added in new tweakables to the visual options, and – curiously – adjusted the “auto” specs, possibly as a nod to the fact that mid-range machines don’t really run Dishonored 2 at anything close to the mid-range. While auto previously sat me with most options set to High, it now lowers most everything to Medium.

The absolute best change is that the mouse sensitivity is no longer linked to framerate, which means that even when the framerate drops massively (which, spoiler alert, it most likely will) you’re not going to suddenly find yourself looking at something you didn’t want to be looking at. I have literally no idea why this was ever a problem in the first place, but it’s not anymore, so hooray for that. 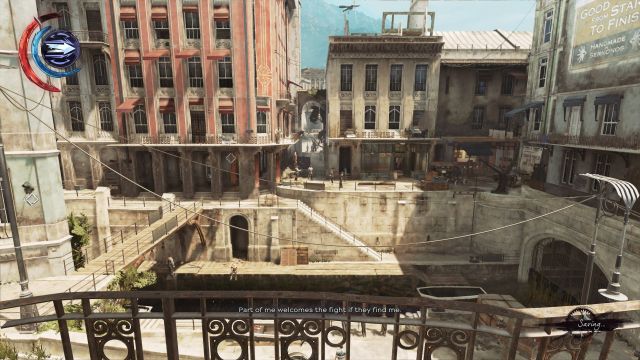 You can now look around this area without the mouse sensitivity going all wibbly, for instance.

Another big change is that you can now cap the framerate. On the one hand, this really isn’t an ideal fix – but on the other hand, if you’re suffering a wildly variable framerate, playing at a constant 30 FPS is likely preferable to playing with a framerate that swings between 50 FPS and 30 FPS at the drop of a Grand Guardsman’s helmet. This is more of a band-aid that assuages the problem rather than outright fixing it, but definitely a welcome one.

The bigger changes are “general performance issues” as well as the new tweakables in the Visual settings.

I’ll say this: this patch actually makes a difference. It may not make enough of a difference, but at this point I’m not sure anything actually will. High-end systems (GTX 10-series and so on) seem to have considerably fewer issues than before, with performance rendered an awful lot more stable – which, really, is what you’d expect from that level of graphics card. Mid-range systems will find performance more stable, too, with less frames being dropped, and more infrequently. Low-end systems… well, like I said, I’m hopeful Peter can chime in a bit more about that. Although it’s a little horrifying to call his system “low-end” considering what I know he can run well. 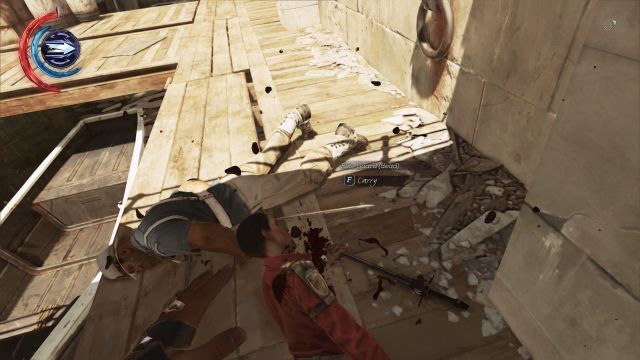 The framerate no longer falls quite as hard as these guys did when I picked them up and dropped them off a balcony for giggles.

When I reviewed it, my performance was routinely dropping like a Royal Protector doing a falling assassination, for no apparent reason. Now, it mostly only does this when I’m looking directly at a huge area, and it drops considerably less. With graphics set to “not entirely shit” quality, I’m mostly ranging between 45-60 FPS, with very occasional drops to a little lower. For the most part, the lowest it stutters to is around 50 FPS. This is still quite noticeable and hardly ideal, but it’s a hell of a lot more playable than it used to be.

Considering how heavily I played with the options, though, I can’t directly compare performance now to performance before by selecting the exact same things. The addition of features like Adaptive Resolution (and we’ll get to that little monster in the next paragraph) also make it difficult to make a direct comparison as to whether the same settings are triggering the same framerate. I’ll say that, post-patch and post-tweaking, it looks around the same as it did before and runs a fair bit more smoothly.

Adaptive Resolution is one of the big new things, and I’m guessing this is mostly aimed at people on the lower end of the spectrum. This, essentially, renders the game at a lower resolution and then upscales it to fit your display resolution, presumably when it sees your framerate dropping. This has the downside of making the game look utterly unspeakable, as you’ll see in noted screenshots. For what it’s worth, the game defaulted to having this on for me, and I wondered what the hell had happened to the graphics until I turned it off. I also never noticed this “adapting”, instead just rendering the entire game in a sort of murky blur, but maybe their expectations for framerate are higher than mine. 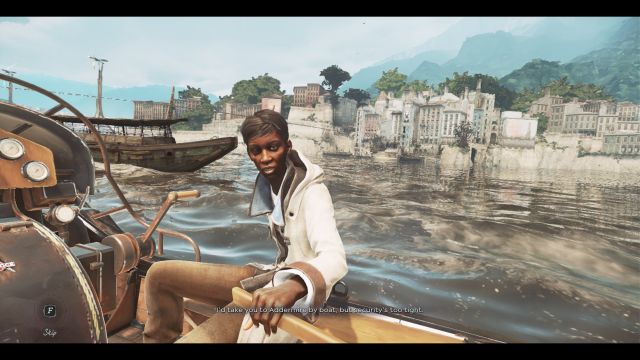 Adaptive Resolution: making things look rubbish and not helping the framerate much since 2016.

I haven’t actually found this to make a huge difference in performance, either. It still dropped a massive amount of frames when looking in that one direction when you first land in Karnaca, and after looking around a bit and seeing much the same in terms of performance issues, I just outright disabled it and didn’t experience much in the way of extra frame drops.

On mid-range, then, you’re likely going to do one of two things: lock the game to 30FPS and play smoothly (and with lovelier graphics), or fiddle with the options to get a decent but less stable framerate. I opted for the latter, with a mix of Medium and High settings. Once again, lowering them to absolute minimum still wouldn’t give me a pure 60FPS, so I don’t really feel like I’m compromising much. (That said, raising them to Ultra absolutely killed my framerate. As it probably should.)

Peter, would you care to chime in with your experiences?

As a result, my experiences aren’t vastly far away from Tim’s; but my frame-rates drop even more spectacularly when looking at larger, outdoor areas with everything on Medium. Indoors, I’m fine for 60fps and above. As soon as Corvo pokes his head out of a window, it’s more like 30-40fps. Those kinds of vast fluctuations make things pretty unplayable, so I employed the new, in-game 30fps lock. Adaptive Resolution can sod off because, as noted, its main function is to make the game look utterly dreadful. 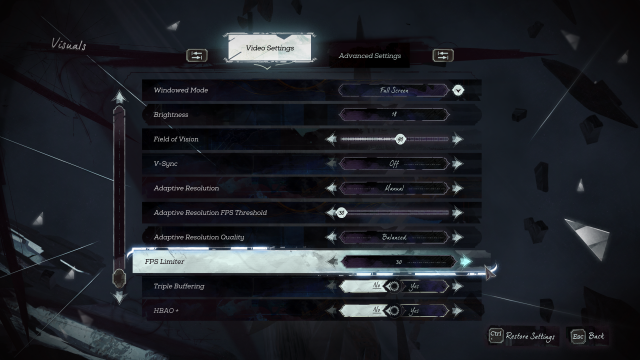 Locked at 30fps, Dishonored 2 is … a bit better. There’s a lot of screen-tearing, and the frame-pacing still seems really off (PC games really seem to struggle with getting that right at 30fps for some reason – Way of the Samurai 4 is one of the few that felt ‘right’ to me). I’m also seeing a lot of jagged, white ‘texture seams’ which I assume is the result of using lower AA settings.

I’ve not yet fooled around with using something like RivaTuner to do an external lock, but that’ll probably improve matters. Since I’m opting for 30fps, I’ll probably be able to bump some graphics options up a little higher too.

Having to do this in the first place is a bit of a shocker, though. Considering this machine could run The Division at 50-60fps on medium-high, and Deus Ex: Mankind Divided (aside from the universally tricky spots in the Prague hub) at a similar rate on med-high, the Dishonored 2 performance is pretty sub-par.

And now, back to Tim: The short version, then, is that this patch is a few steps forward. Not a gigantic leap forward, and not a total fix for everything – but at this point, I’m not convinced that Dishonored 2 will ever be pushed to a point where it looks pretty good and runs spectacularly on mid-range systems. I’m beginning to worry that this is more of a problem with the engine than optimisation, honestly. While it’s not hugely problematic right now, it is – as noted – a little odd that comparatively beautiful games run an awful lot better than this. Nonetheless, a lot of the more egregious issues have been excised, and I suspect a lot more people will be able to get on with enjoying the game instead of enjoying the options screens and framerate counters.

If you’re nearer the minimum end of the system requirements, you might be able to scrape by with the aid of the 30FPS lock. If you’re sitting in the middle, expect some drops, but most of the ones that made things unplayably awful have hopefully gone the way of the assassination targets. And if you have a super-computer? Well, you might actually be in a position to enjoy Dishonored 2 to its fullest.