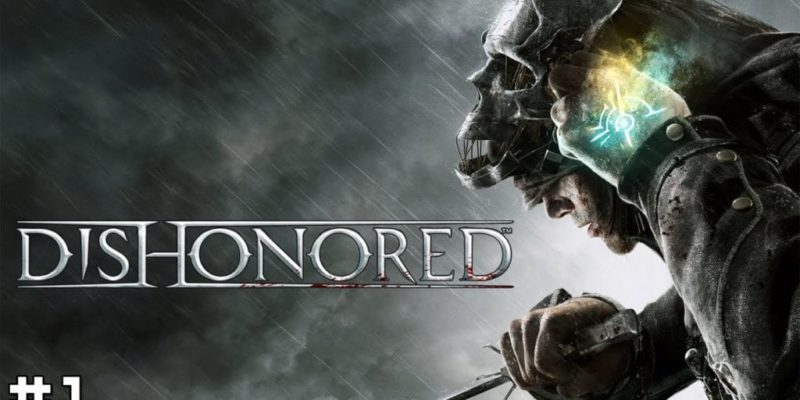 Play your way, that’s the focus of Dishonored. It’s a lofty goal and, when you really think about it, so few games that claim to offer such freedom actually deliver. Too often ‘play your way’ means you can either ‘do this’ or ‘do that’. In Dishonored that’s not the case, you can do pretty much what you like. Within the boundaries of the game’s mechanics, of course…

As bodyguard turned assassin Corvo, your goal is to prove your innocence of a crime you didn’t commit and bring the real perpetrators to justice. Usually, in a game about an assassin, that would mean hunting down and killing those involved before working up to a final showdown with the biggest, baddest baddy. In Dishonored, justice doesn’t have to mean death. But it can, if that’s what you want.

One mission early on serves as a brilliant example of the ‘play your way’ outlook Arkane Studios has taken. Your task is to remove one of the city of Dunwall’s most powerful and influential politicians from office, something you can achieve by killing him or marking him as someone not worthy of his current position. The latter ‘nonlethal’ approach is undoubtedly more difficult, but as far as I’m concerned, all the more satisfying.

Taking the nonlethal approach forces you to avoid more guards, subdue your target without killing him, carry him to a special location (past more guards) and then mark him in a special way that I don’t want to spoil for you. Depending on how you want to play, the layers of difficulty ramp up and up until it reaches a point that the task you’ve given yourself is so convoluted that if it works out you feel like a true superhero.

To achieve these seemingly impossible feats, Corvo has a number of special tricks up his sleeve. Upgrades on a bare bones skill tree allow you to see through walls, possess other living things, quickly teleport within a very short radius and, among other things, slow down time.

Using these abilities becomes an art in itself, your only real limitation being your creativity and imagination. Blink, for example, which allows you to quickly teleport from place to place can be used as a simple means of more easily scaling buildings in a bid to stay up high and out of the guards’ line of sight. Alternatively, it can be used in an attacking sense – to appear behind enemies and stick the knife in before they can react.

Combining abilities is another key skill a master assassin must learn. Using Dark Eye to locate enemies through walls, before taking possession of a rat, crawling through a tiny hole in the wall, exiting in the room with the guards, turning back into a human, killing one guard and then slowing down time and killing the second one before he can react.

That’s just one way of doing things. As I said, though, I prefer not to kill anyone. Either avoid guards completely or subdue them (with a sleep dart or sleeper choke) before hiding their bodies.

Taking the nonlethal approach has advantages that become amplified the more you play. The less people you kill the less ‘Chaos’ encroaches upon the city. If you run around killing enemies left, right and centre then the next level will have more guards than usual, it’ll also have more rats and more weepers (more on them later). More guards, rats and weepers means it’s more difficult to stay out of sight and more likely that you’ll have to resort to combat.

Dishonored’s approach to first-person combat is somewhat unique in that it’s equal parts melee, ranged and magical. Using Corvo’s special abilities you can dart across the map, slow down time and take possession of other bodies in a bid to stay one step ahead of the rest, but when it comes down to the nitty-gritty, if you can’t fight with weapons you’ll die.

Crossbow and pistol ammo is on the rare side, so you can’t rely on your ranged weapons to get you out of a tight situation, especially when you find yourself cornered or surrounded. Melee attacks with your dagger are more about timing and precision than brute force, most success coming through blocking and parrying in a bid to put your adversary off-guard before landing the decisive blow. However, find yourself encircled by four or more and your best bet is to try and run away to fight another day.

Entering into combat at all in Dishonored feels like failure. Given all of your abilities and the way the levels are designed, if you’re seen by a guard it’s because you haven’t thought through your plans well enough. Either that or you’ve not executed it properly. On more than one occasion I’ve reloaded my saved game as soon as I’ve been spotted and replayed the same section again with a view to getting that ‘perfect’ infiltration.

Guards are not the only thing you need to worry about, rats and weepers can be just as dangerous. The city of Dunwall is suffering from a plague that is quickly spreading and wiping out the populace. Those in the advanced stages of the plague are known as weepers, and it’s the rats that are carrying the plague. In a gaming sense, weepers essentially act as zombies; their flesh is dying, they vomit everywhere, they attack on sight and with little forethought. They’re extremely dangerous and should be avoided at all costs.

Rats, on the other hand, pose no threat when in small groups, but as soon as they start to move in packs you need to get out of their way. These rats are aggressive and will attack you like a shoal of piranha if you get too close. Something else to think about is that, if you’re looking to complete missions without killing anyone, you’ll need to hide the bodies properly – not only to prevent guards stumbling upon them, but to stop the rats from eating them. Unconscious bodies that turn to dead bodies via rat munching counts towards your kill count at the end of a mission. Sometimes finding a good hiding spot is not easy, further adding to the difficulty (if you care about such things).

All of this rat infestation, weepers avoiding and building hopping takes place in a world that ranks among the very finest  ever seen in a videogame. I think Bioshock’s Rapture was the last place that has had such an effect in terms of impact, character and that sense of being in a real world.

Dunwall is part Victorian England, part steam punk dystopia and part political hell hole. Whether it’s night or day it exudes qualities that draw you in and force you to want to explore it just to absorb its sheer presence and well-rounded design. From the cobbled streets, to the alternative-London architecture there’s never a time when you feel the environment is lacking or disrupting your sense of immersion. Quite the opposite.

It’s no exaggeration to say it feels as though you’re exploring a Dickensian world seen through the eyes of Philip K. Dick. It’s a magnificent videogame environment, which allows you all the freedom in the world to put Corvo’s unique skills to good use.

And that’s perhaps the best thing about Dishonored. Despite all of its different elements, it’s a cohesive, intuitive experience. Not once do you feel as though you’re being cheated or told to do something. The choice as to how to act, react and engage with Dunwall and its inhabitants truly is yours.

Hitman: Absolution [Preview] – The glory of the kill

By Robert Workman23 hours ago
News

The Suicide of Rachel Foster review – Wine is fine, but whiskey’s quicker