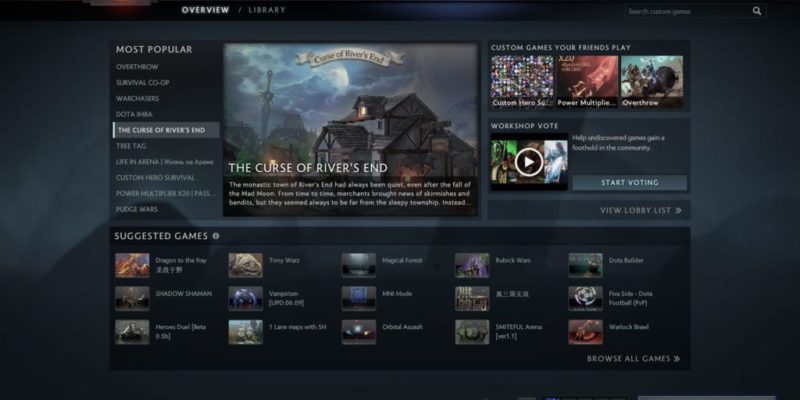 Valve have released more details about their upcoming Dota 2 ‘reborn’ beta, and how Gaben and company (because I like to imagine he’s personally designing Dota 2) will be adding Custom Games to the formula.

Custom Games are described as ‘community created’ set-ups, and can apparently be anything from a “a grand brawl between ten Invokers, to a story-driven dungeon adventure, to something creative that no one has seen before.” Valve say they want people to potentially be able to experience something different from Dota 2, every time they load it up.

To that end, there will be a Custom Games Hub, in which all the lovely user-created Custom Games will be on display for you to search through. You’ll be able to filter for popular game-types, those that your friends are playing, favourites that you’ve played before, and suggested games (which cycle every 30 minutes.)

There is, of course, also a voting system. This will be one of the metrics that determines which Dota 2 Custom Games pop up on the ‘Suggested’ roster.

It’s possible to spectate on Custom Games, and to create or browse lobbies (with filters for connection, game type and so on.) Said lobbies can be public or private, if you just fancy a game with friends or are testing something out. 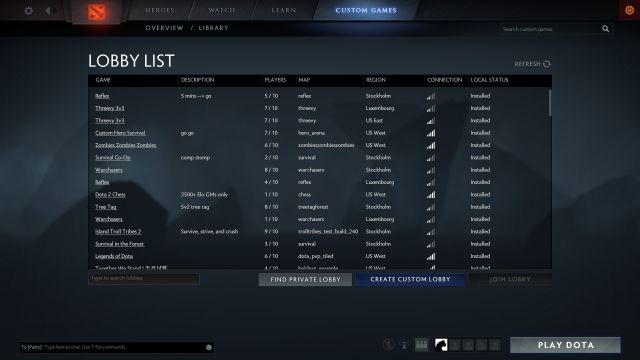 As a further example of the type of thing Dota 2’s Custom Games can bring, Valve have detailed an ‘Authored’ one called Overthrow. Described as “a quick fight to the death in a small team free-for-all as players try to earn enough kills to win the match before the timer expires,” it’s a more rapid alternative to the regular Dota 2 game mode. More Valve-Authored game types are planned, and will show up “in the coming weeks.”

Concluding the update, Valve gives an overview of the developer tools that will be used to create these Custom Games. There’s also a more in-depth 12 minute video showing the tools in use, which can be viewed through the link at the beginning of this piece.

In short, Valve will be giving players access to the Hammer level editor, material editor, model editor, particle editor, and developer console. I’m not sure what the entry barrier on those things is like, but Valve do say they’ll be providing plenty of examples, “to help you get the hang of creating your own Custom Games, including all of the source content for our Overthrow mode: maps, gameplay scripts, and a variety of advanced Panorama UIs ranging from scoreboards to team selection.”

Part 3 is due “later this week,” and will (most importantly) launch the open beta for Dota 2 Reborn.