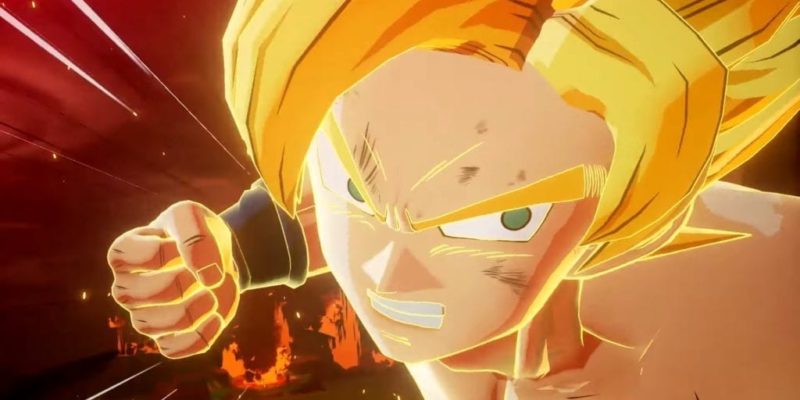 It’s easy to look at Dragon Ball Z Kakarot and think, “Haven’t we seen this story told before?” There are a number of Dragon Ball Z games that have taken the position of telling the Frieza saga through over-the-top fights and having the art style resemble the anime show as close as possible. However, Kakarot is one of the first modern takes on having a solo, action role-playing game that focuses its attention on the fans.

One of the biggest promises for Dragon Ball Z Kakarot is the ability to fly around the planet and talk with its inhabitants. There was a lot of emphasis on returning characters, like Launch, who were present in the original Dragon Ball series. This also creates various side missions to help Goku power up before taking on much more powerful enemies, like Raditz, who was present in the demo.

You’ll fly around on Nimbus or simply go from ground to air in order to fly about freely. The demo was played on an Xbox One dev kit and using an Xbox One controller. For that controller, RT was used to descend and RB to ascend. Y made Nimbus do a barrel roll, which the game described in a prompt as a way to course correct. There are numerous Z Orbs to collect throughout the map, though I’m not quite sure what you use them for at this point. 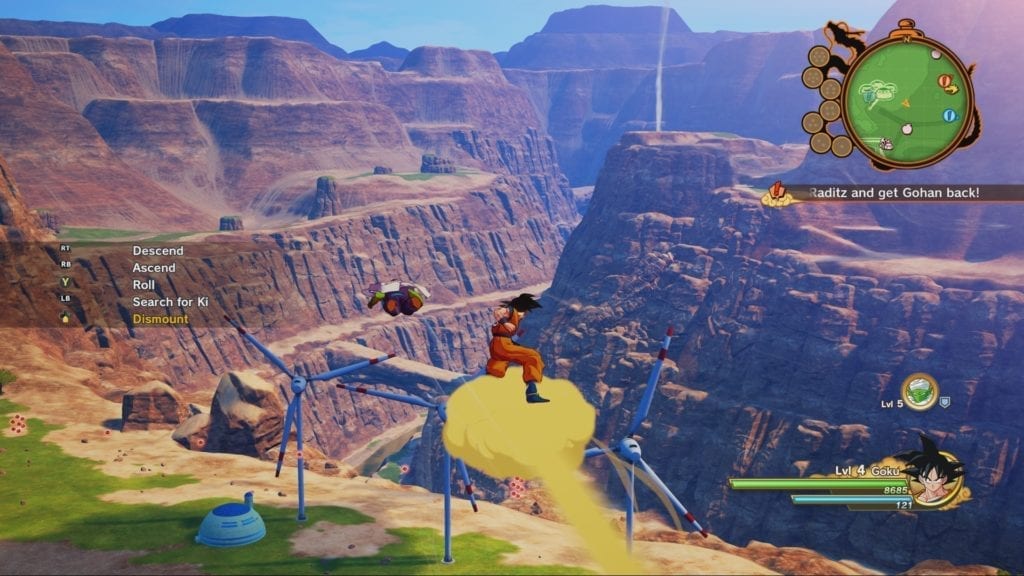 When looking at your mini-map, markers will note important places on the map for you to go. However, one of the biggest standouts from doing this in the demo session was the random encounters that came along with it. Honestly, I was surprised to see this in the build that I played. Not only was I able to charge a dinosaur as it stomped around on the ground below, but in my flight around the world, there were quite a few random enemy encounters. These offered small stints of combat in order to help acquaint you with Goku’s abilities. This was important, as during the 20-minute demo you could head straight into a battle with Raditz.

The controls of the game were fairly intuitive. The Dragon Ball Z anime is known for its fast aerial action mixed with over-the-top power attacks. When taking on an enemy like Raditz, it was as close to the show as you could get. Other elements that drive that sense home were having characters like Piccolo along for the fight as you hurl through the air, literally having the battle turn sideways at any point. 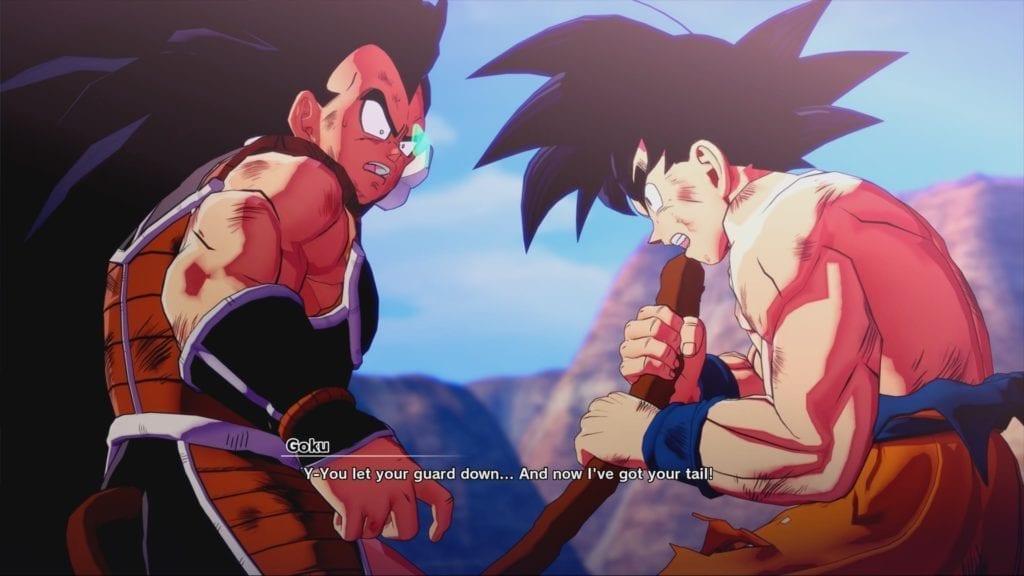 Dragon Ball Z Kakarot mixes in role-playing elements in a few ways. For starters, Goku can become powered up through other missions outside of general boss combat. The combat includes moves to charge your Ki, Ki Blast attacks, and a general melee attack. These were fairly weak when I entered into battle with Raditz, only allowing me to chisel away at his health with these puny attacks. However, these work in tandem as you can create combinations of moves from kicks, punches, and Ki blasts. As previously mentioned, Piccolo was present in this particular battle as well. You can leave his moves to AI control, but you can also manually make him do certain moves.

I was a little bummed that there weren’t more powerful attacks in the demo, though. I mean, who doesn’t want to see Goku fire a Kamehameha from his feet?

For some of the defensive abilities, Goku can side-step enemy fire with blazing speed. This is very much akin to combat in the anime, as he disappears quickly from left-to-right, indicating that he’s moving with blazing speed. During the fight with Raditz, it was heavily important to do this in order to dodge his blasts. Holding down LT prompts Goku to block. You can also use this move with X, allowing you to block and teleport behind foes to deliver a nice combo of your own. Again, translating the action of the anime into the experience.

You will have to monitor your overall power during fights as well. Using Y charges up your Ki, something you’ll have to constantly do as it drains in battle. The demo had the bar filled up to level 126, allowing me to at least finish the battle at hand.

The use of Ki isn’t just isolated to be a battle thing. When you’re flying around the world, using Ki Sense will uncover points of interest around you. Main story objectives are highlighted in red around the map, and you can freely travel to these. It will also assist in determining the power of an enemy, something also seen in the anime. I thought this was a nice touch, providing another layer of immersion. 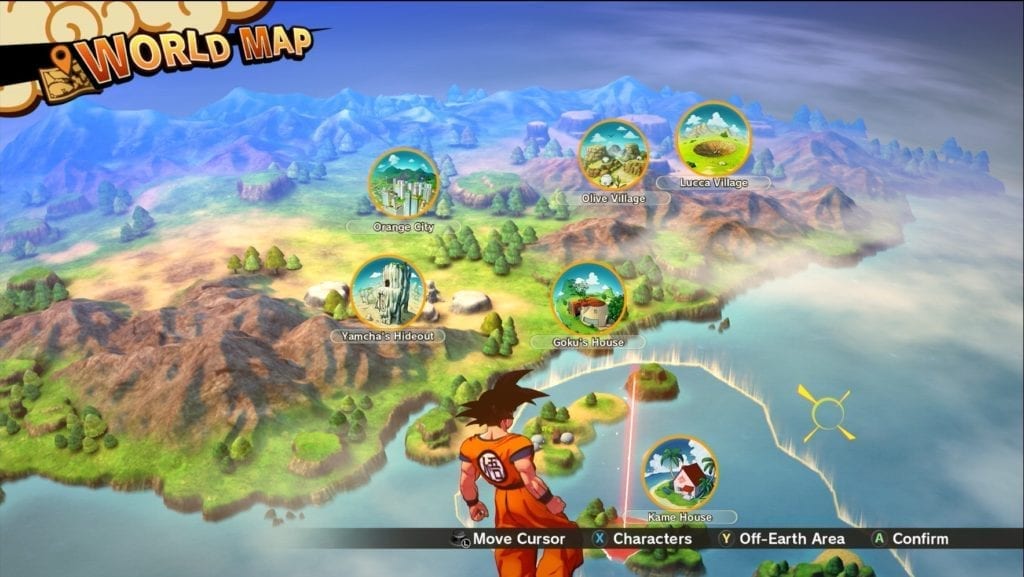 After playing Dragon Ball Z Kakarot, I’m pretty confident that it will lend itself as proof that developer CyberConnect 2 can pull off an action role-playing game within the Dragon Ball universe — even if it’s a story that has been retold many times over, and even if it isn’t a true open world experience.