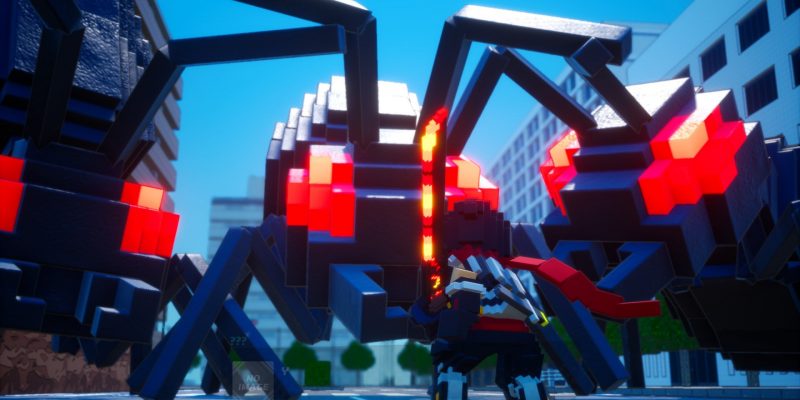 What’s not to love about silly spin-offs to beloved franchises? Earth Defense Force: World Brothers aims to take EDF and turn it into a comedic voxel version of the mainline games. It’s a weird choice, to be sure, but mostly because EDF was already very silly. Developed by Yuke’s, who handled the solid Iron Rain, this game is not meant to be a substitute for a mainline game in the series. It does some things a bit differently, but in the end, this is an EDF game through and through. Fans will still enjoy the gameplay. But they’ll miss certain features, all while enjoying new ones.

EDF games usually have some sort of story, and Earth Defense Force: World Brothers takes things even further. While past games were mostly dominated by idle chatter from specific personnel meant to give some context, this time there are named characters. What’s more, they even kind of have arcs. One arc features you working alongside a Canadian man who is dressed up as a bear. He stirred up a giant hornet nest looking for honey, and you have to deal with the aftermath. Hornets, of course, don’t make honey, but the game doesn’t appear to know that.

All the dialogue is fully voice-acted and often quite funny. One character routinely breaks the fourth wall, frequently to talk about the EDF series itself. She points out that an enemy is from one game or another, mentions the numeric entries, and the others have no clue what she’s talking about. The plot of Earth Defense Force: World Brothers concerns an alien invasion, of course. Only, because the game is voxel-based, the Earth is a cube instead of a sphere. And that cube has been blown into pieces, yet it’s still intact. You need to scare away motherships that create dark mist to somehow put the Earth back together. Yes, it’s stupid. It’s meant to be. 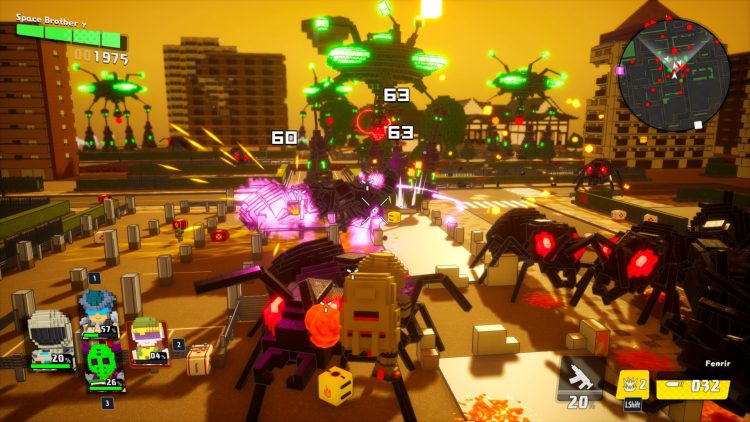 Earth Defense Force: World Brothers has 60 missions, with another 11 coming in a DLC mission pack. Meaning that, even with the extras, it’s still shorter than EDF 4.1, let alone EDF 5 . This is fine, but the game retails for $60 USD, which is high, considering. Easy, normal, and hard difficulties can be selected from the beginning, but higher difficulties can’t be played until the game is beaten on hard. Structurally, though, this is very much a typical game in the series. A lot of the missions are somewhat shorter, and the maps are smaller than in the last couple of games, but I didn’t mind this much.

What truly matters is that the gameplay we love is still there in spades. You’ll still use a large variety of weapons to blast giant bugs, robots, space ships, and the like. Earth Defense Force: World Brothers still gets plenty hectic, as you’re swarmed by enemies and need to do your best to keep them from overrunning you. Hornets still fire their stingers, long-range Hectors can send you tumbling from across the map, and red ants are gonna shake you until your brain rattles in your skull.

But what makes Earth Defense Force: World Brothers stand out is the way it changes some of the core principles that we’re used to. In past games, players selected a class and outfitted them with two weapons. Both of these attributes are gone. Instead, you’ll have a squad made up of four characters. Each character can be swapped between on the fly, and is equipped with their own weapon, special ability, and super skill. Many of these characters are cute, voxel versions of the classes from past games, however. Many others trade in national stereotypes. One character is the Cowboy Brother, who wears a cowboy hat and comes with a revolver called the Spirit of Texas. Yup. 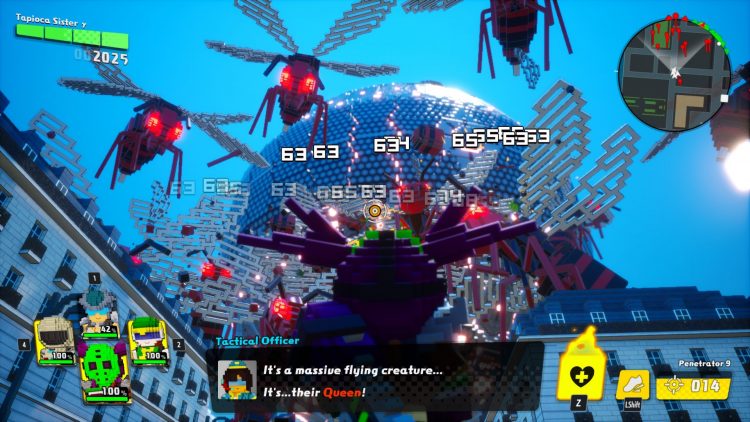 The difference in making use of weapons is large. Weapons are never dropped, but instead only come with new recruits. Each level has random characters indicated by pink exclamation points that you rescue. The characters, I mean, not the exclamation points. Once you do, they’ll join up. At first, characters can only use the weapon type they start with. As you find and rescue more of that character, however, they eventually learn to use all of the weapon types. This, understandably, cuts down on weapon variety and depth. But there are still a ton of weapons to find. You can’t level the weapons up, however.

Weapons all start at level one on normal, and you’ll start to find level two gear once you hit the midway point on that difficulty. Character abilities can ape the use of class mobility actions from past games. Wing Diver-related characters can fly, some characters can run, and the spaceman jumps using moon gravity and can dash forward on a rocket. Enemies drop a box that increases the special gauge. Once it hits 100%, you can use their special. It’s often an attack or buff, and it reminds me of the Musou games. Save for the enemies here actually attacking you.

You can switch between the four characters at will, which makes for drastically different gameplay. If one character gets incapacitated, another can revive them, so you don’t have to worry about taking a single cheap shot and having to restart from scratch. Characters reload and their abilities cool down when not in use, too. This results in strategically swapping between characters, which makes for a highly compelling style of play. I like to have two Wing Divers with rapiers on my squad and  swap between them. That way, I’m always flying and shooting, which is a blast. That’s been my favorite way to play these games for years now. 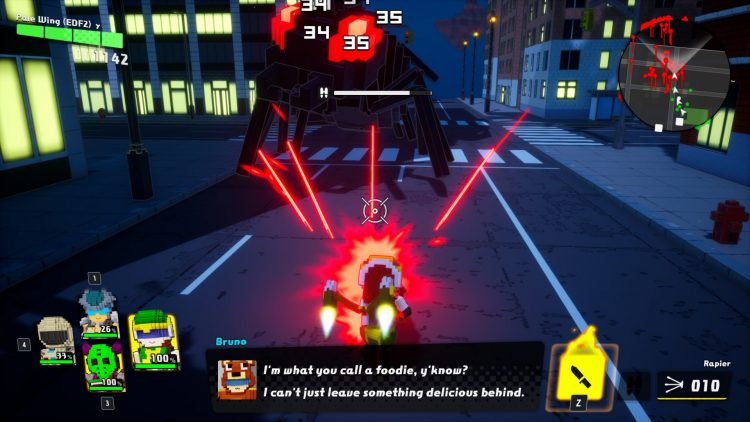 May the sun never blind your eyes

Of course, it’s not all so great. Characters get more armor through use, and there are tons of them. Therefore, instead of raising HP for four classes like in the last couple games, you’ll need to either be happy to do a shit-ton of grinding, or just stick to the same selection of characters. Why bother breaking in a newbie when you’re already comfortable with one of your older members? I got fairly set on my favorites and didn’t want to swap them out at all, but that’s not honestly much of a big deal to me, as I mostly just played as a Wing Diver in past games (when applicable).

Earth Defense Force: World Brothers is another strong entry in the series that will make fans happier than Iron Rain did. It’s a standard EDF game in most ways. The new character stuff is interesting, even if I do miss the old weapon systems. I definitely don’t like that there are some missions where you have to defend a location from enemies (just no). Mouse support is also very disappointing like it was in Iron Rain. But this is an enjoyable game that feels different enough from past entries to justify its existence while being similar enough to continue to offer what people enjoy about the series. 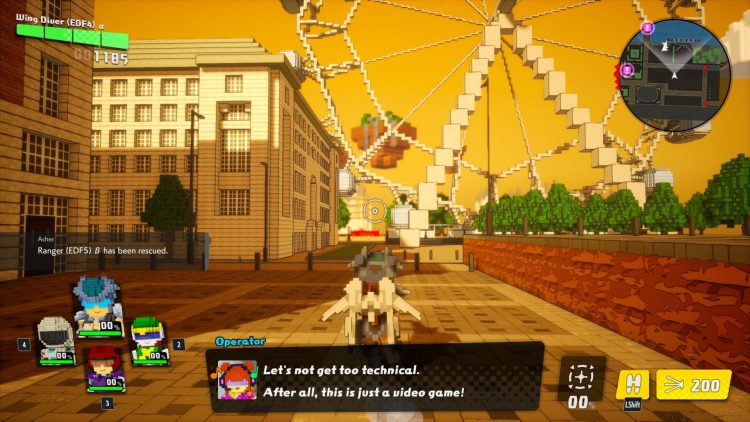 A very enjoyable EDF game that costs more than it should. But it nails all the important stuff, while adding some enjoyable new mechanics, even if some depth is sacrificed in the process.

Ubisoft Connect just got a new and improved chat interface