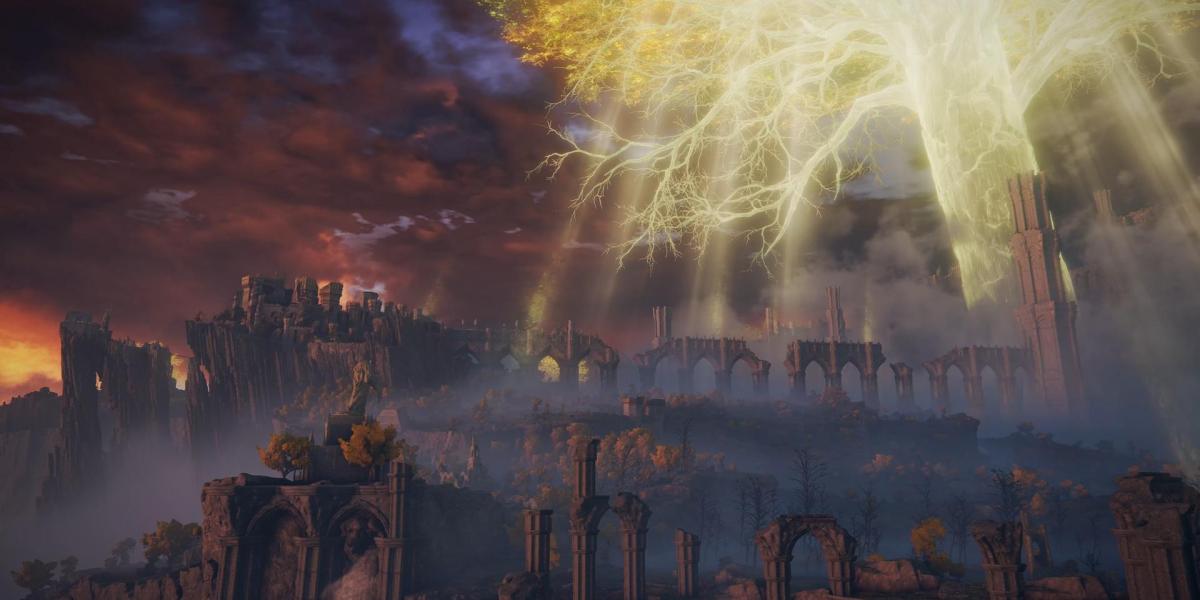 If there’s one thing I can easily state after six-ish hours of Elden Ring hands-on preview time on PC, it’s that the game is very definitely a ‘Soulsborne’ game. In fact, I can go one step further: it’s pretty much a Dark Souls game. Shields are useful. Combat is… well, not ponderous, but weightier than Sekiro or Bloodborne. Poise, staggering, and item weight are things of huge importance.

In a lot of ways, Elden Ring feels like Dark Souls 4 with the names swapped out. I mean, the spell styles (Sorceries and Incantations) have different names and are mashed up a bit, but they’re effectively used the same way. Bonfires are Sites of Grace, and Souls are Runes, etc. But for all of that? If this is Dark Souls 4, then it’s had a lot more meaningful additions than we saw at any time between Souls and Souls 3.

Elden Ring: Previewing the Lands Between

The biggest change is the shift to a mostly open-world format, and this happens nigh instantly. After the obligatory starting section, you get brutally murdered by something 10 times your size. It’s solely to remind you that this is a FromSoftware game, and it’s going to beat you to death with your own hubris. Soon after, you get the chance to do a Tutorial Cave and then — whether you take the game up on that offer or not — you step outside and go wherever the hell you like.

Early on, Elden Ring strongly encouraged me to go to Stormveil Castle, a short way to the north. I politely told it to piss off, not least because it hinted at someone or something called “the spider” being there. While I suspect that’s a nickname (one of the trailers featured a sizeable humanoid boss with extra limbs grafted to him) I wasn’t about to chance it, so I went exploring.

Wandering the world of Elden Ring is made significantly easier with the aid of Torrent, a magical horse (sorry: “Spectral Steed”) you acquire very early on. Not only can Torrent prevent fall damage and double jump, but this dark fantasy My Little Pony can leap on Spiritsprings — air currents that propel you far, far into the air, letting you reach sky-scraping plateaus with ease. You can hop from rooftop to rooftop or leap off a cliff without a worry. 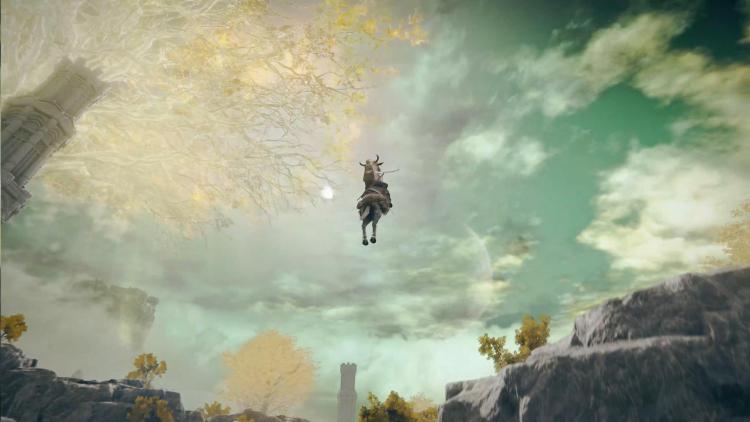 I wasn’t kidding: Spiritsprings let you get high off the ground, and Torrent doesn’t understand the concept of fall damage.

I used all of this to my advantage. Or, well, possibly disadvantage; this is a FromSoft game, so I died a lot. But! Rather than venturing to Stormveil Castle, I went exploring. I went east and fought an invading NPC red phantom. I travelled south and ran like hell from Winnie the Pooh’s angry, protein-chugging cousin. I ventured into a catacomb and evaded a skeletal chariot, and battled my way through a ruined castle occupied by beastmen. I took on a some bosses, and even beat a few of them. And I’d be surprised if many people will have the exact same experience as I did. It’s a hell of a thing in a game of this genre to see the landscape stretch out in front of you, spot a gigantic creature of some sort, and wonder if you can take it on.

In short, Elden Ring deals nicely with one of the issues that plague some people with the Soulsborne games. In most, you have very few options early on, both in terms of what you want to tackle and how you want to tackle it. You have few weapons, few resources, and pretty much one area to progress through. Elden Ring hurls that premise off a cliff. While it looks like there’s still plenty gated off (at a glance, it looks like you need to clear Stormveil Castle before you can proceed further north), you certainly have more options in terms of what you want to do at any given moment. 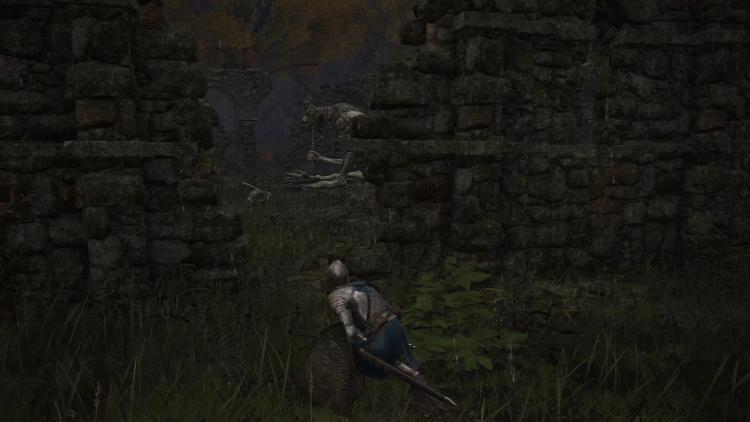 While not as stealth-heavy as Sekiro, sneaking around the Lands Between definitely has its advantages, both in the open world and in the dungeons.

Saddle up and ride out

The other thing I want to touch on with the open world is how it handles combat. First: your mount. Torrent has his own sizeable health bar, and while you can be dismounted by heavy strikes, you can quite literally run rings around footbound enemies while hacking away at them. This makes taking on large groups on the road significantly easier.

Second: the various encounters along the way. The roads, fields, and swamps in this part of the game are patrolled by all sorts of nasties, from mounted knights to wandering zombies and gargantuan giants. Putting that aside, there are plenty of little encampments and ruined buildings to explore, most of which are occupied. This is where stealth generally comes into play a bit more, because you don’t want to alert a dozen soldiers to your presence at once.

So, like with Sekiro, you’ll lurk in bushes, watch patrols, and thin the numbers out with backstabs before moving in properly. Or you’ll trip an alarm bell and — if you’re me — either run screaming or die flailing. Indeed, you can even do this in the various dungeons themselves: plenty of encounters can be skipped (or initiated with a backstab) by watching patrol routes, crouching, and shuffling around a table.

And in case you were wondering? No, you can’t take Torrent into dungeons. Once you set foot into a castle or catacomb, your trusty steed is unavailable until you leave. I hesitate to call those areas setpieces, but they’re the more familiar, meticulously crafted Soulsborne areas which you need to carefully pick through. And while I only experienced three or four of these segments, they’re all about as good as I’d hoped. They felt like in any other Souls game: precise, vicious, and dripping with tension, but generally fair. 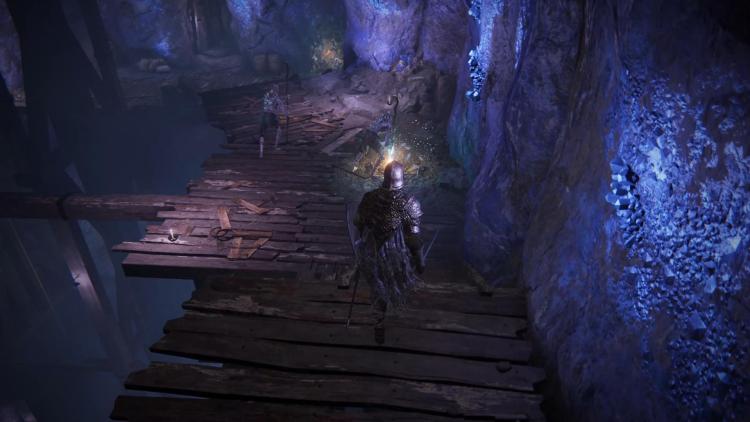 While a lot of early areas are washed out and grim, Elden Ring still has plenty of places with color and vibrancy.

A Song of Rings and Demigods

Something else that’s definitely Souls is the world, story, and plotting. The involvement of George R. R. Martin as a writer in Elden Ring was a big deal, but if you hadn’t told me he was involved, I wouldn’t have known.

As I understand it, the famed writer mostly had a hand in the world-building and backstory, creating the general lore for the game. The actual in-game plot and the way the lore is presented is pure Soulsborne: you get hints from enemy names, item descriptions, and scraps of dialogue, and piece together these snippets of knowledge in your own head. Don’t go in expecting 20-minute cutscenes. Do go in expecting to be a pseudo-undead character hunting down shards of a MacGuffin held by corrupted individuals which you’ll learn about from the cryptic mutterings of a suspicious lady and the description of a shield.

After six hours of play, there’s obviously a huge amount I want to touch on, but I also don’t want to ruin any surprises. Believe me, I’d love to expand on what I did in that beastman castle and how a choice I made impacted some NPCs. I want to tell you more about that catacomb. Even in gameplay mechanics, I could talk about how your skills (Weapon Arts) can be replaced, which is a neat customization touch that lets you personalize weapons and not have to choose between “great special attack” and “weapon you’re familiar with and enjoy.” And oh, some of them are impressive. Or the respawn points, or summoning, or crafting. I haven’t even talked about the fact that you now have a dedicated jump button, and jumping attacks are a very specific thing.

Instead, I’ll note that the PC port (and this is, I believe, the first time press have had a go at the PC version) appears entirely solid, supporting 4K resolutions and 60 fps if you’ve got the machine for them. That was what was claimed when the specs and details were revealed a few months ago, and I don’t think it ever went higher than 60, so those initial PC details seem accurate. I don’t know the specs of the machine I was playing on, but considering it’ll be on PlayStation 4 and Xbox One, I imagine any half-decent gaming PC should be just fine. Pretty as it was, it didn’t seem super intensive (although the promised raytracing patch will probably change that). We’ll find out at launch, but right now I’m unconcerned. 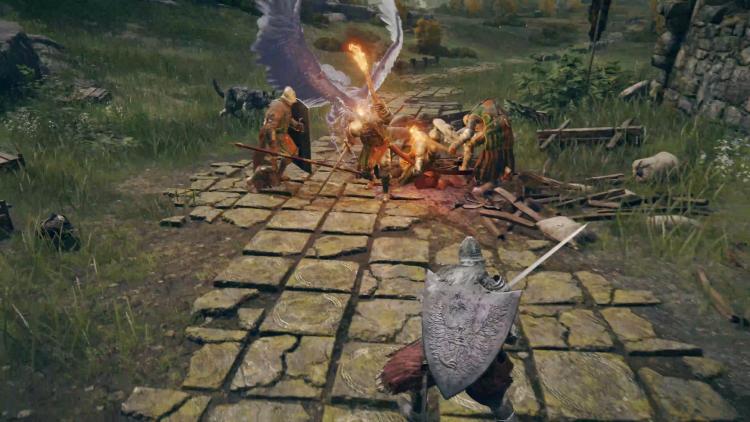 Taking on five enemies at once is usually a bad idea, but that flapping grey thing? That’s a summon. That’s a friend.

Ring up my interest

Because this is both a bit long and because I don’t want to spoil anything else, I’ll finish here. I normally try to end previews with “but it might be a bit shit,” and there is always the possibility that it’ll fall apart a bit after extended play. Equally, if you’ve never enjoyed the Dark Souls combat or challenge, then Elden Ring isn’t likely to change that. It’s as hard as ever: it just gives you plenty more options in terms of what to deal with and how to deal with it to let you play at your own pace and with your own style.

However! I played the Elden Ring preview for six hours without so much as taking a break for food, and I could happily have played for six more — not least because when I was banging my head against a boss I could easily just go explore somewhere else in this gorgeous, horrifying world and bang my head against something else. If the fact that I couldn’t put the damned thing down isn’t an indication that you should really pay attention to Elden Ring, then I don’t know what is. While Bloodborne and Sekiro tried different things, Elden Ring feels like the natural evolution of Dark Souls: familiar, but fresh.