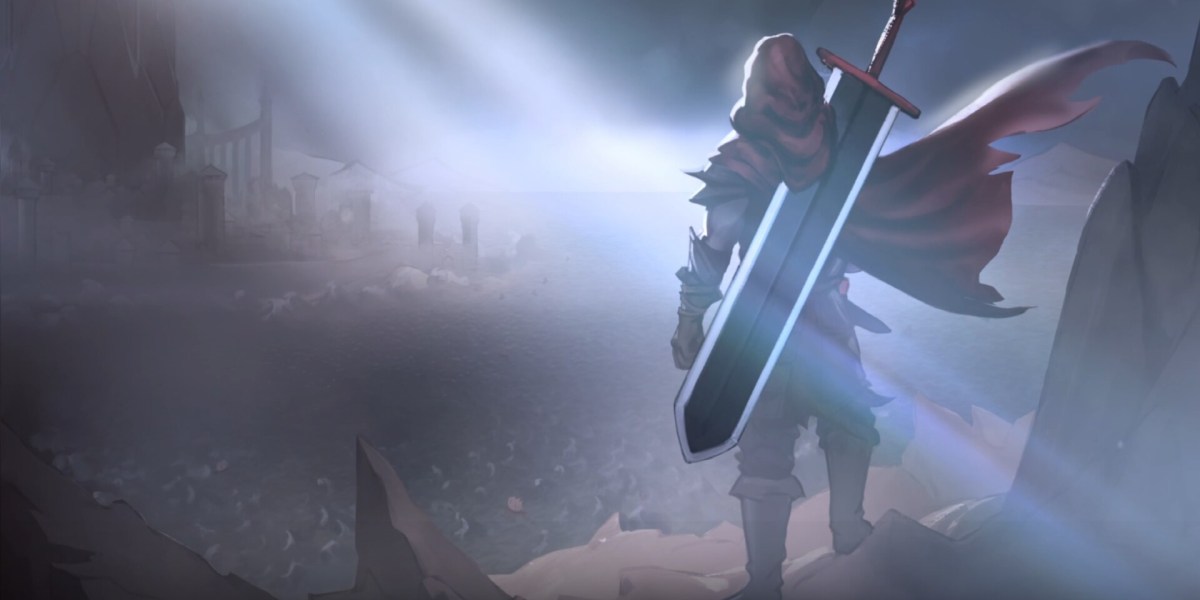 Everyone loves a difficult game every now and then. It’s very rewarding to fight a nigh-unbeatable opponent only to pull off a victory with only a sliver of your health bar left. That brings us to Eldest Souls, a new offering from developer Fallen Flag Studio, which is filled with these moments.

Based on the name, you can tell that Eldest Souls wants to pique the interest of Dark Souls (and Souls-like) fans. Indeed, trials and tribulations await you in this near-10-hour boss rush bonanza. You’ll feel frustrated, but you’ll also gain a sense of satisfaction once you’re through.

Eldest Souls‘ plot tells of the Old Gods who were influenced by a dark entity known as Eksyll. In a so-called Great Crusade, the gods were overthrown. However, after only 200 years, Eksyll returned. The Old Gods stirred once more and it’s up to you, a nameless warrior, to put an end to his schemes.

The story of Eldest Souls isn’t particularly original, nor is it that important. You do find a few passages here and there to tell you about the world that you’re in. Sadly, it tries to follow the cryptic storytelling concepts of Souls-like games without a narrative hook.

Then again, this is a boss rush title with a fairly short campaign. Sure, there are NPCs that provide special items upon completing a quest. But, these characters are too few and the quests themselves only entail bringing items to gain an accessory. Also, you wouldn’t see any monsters in between boss fights. It’s mostly just you against the tough challenges that await you in specific rooms. And, boy, they’re a pain in the butt. At the very least, the environments are rendered in a masterful pixel-art style that’d remind you of 16-bit classics. You’ll find yourself enjoying the backdrops just before you face brutal enemies. 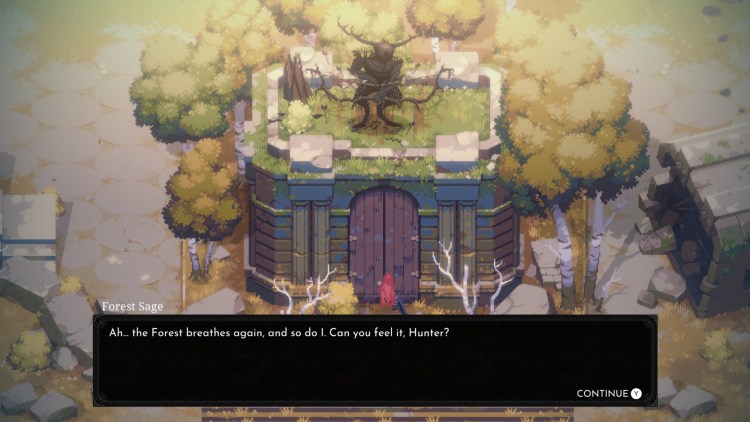 The meat and potatoes of Eldest Souls is its combat system. Your character has normal and charged attacks, a dash move, and the Bloodthirst buff. This last one is activated by doing a fully-charged attack, allowing all subsequent hits to temporarily regenerate your HP. You may also use a Bloodburst, a powerful discharge that consumes your remaining Bloodthirst meter. This is a balancing act, one that you need to master early. Do you want your swings to heal you a bit, or should you go for a stronger blast? Alternatively, would you even want to charge up your attack, or will you be left open while you’re doing that?

Likewise, you’ve got three distinct fighting styles. Windslide is for fast and agile strikes that have projectiles homing in on enemies. Berserk Slash, meanwhile, is more offensive-oriented, emphasizing high-risk, high-damage gameplay. Lastly, there’s Counter which, you guessed it, puts you in a more defensive role.

You may only have one fighting style active at any given time, though you can freely switch whenever you want to. Moreover, each fighting style has a couple of skill trees that you can dump points in, as well as nodes that let you socket shards. These shards are dropped by specific bosses and they grant special effects, from teleports and free dash moves to generating corruption on the ground that can heal you and damage your foe. All these systems make for added flexibility in your choices. Personally, I preferred the Windslide branch with several socketed shards that can help with healing. 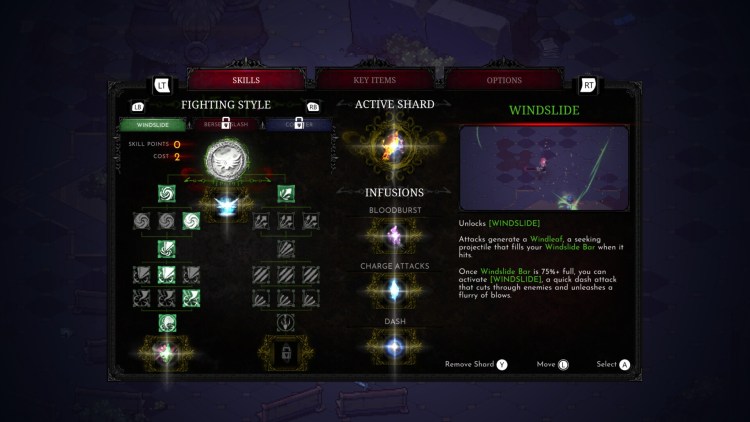 Eldest Souls has 10 bosses, and each one has mechanics that will push you to the limit. The Guardian, a soulless knight, has multiple swings and regeneration capabilities. Aryana, meanwhile, uses different lunar cycles as a key feature during the encounter. You’d have to ascertain whether it’s a full moon, half moon, or new moon since these will determine the types of attacks that she has.

Then, there’s a faceoff against a dark wizard named Drakmur, which is more akin to a “bullet hell” game. If you accidentally get hit by one of his orbs, you’d get teleported to another dimension and you’d have to find your way out. Likewise, several bosses have enrage phases that make them even deadlier. 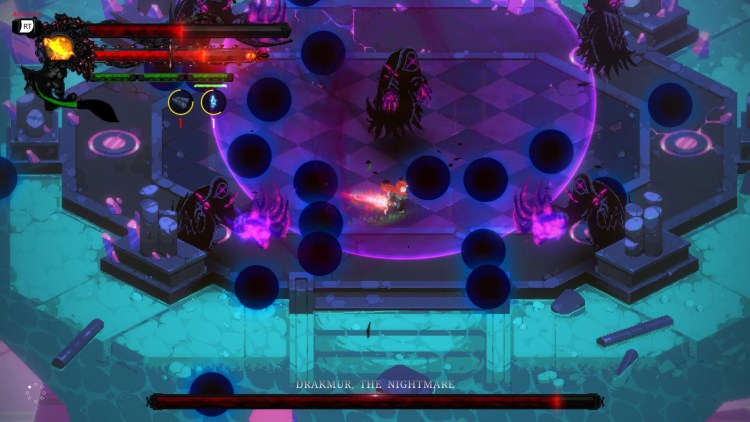 Every boss battle in Eldest Souls is both a wonder to behold and an agonizing test. The mechanics, abilities, and frantic pace will wow you as you pull your hair out. Mistakes will be punished and carelessness is an outright death sentence. You need to be quick with your reaction times, and you need to be patient lest you start throwing controllers everywhere. Speaking of controllers, Eldest Souls is best played with one. I tried playing with a keyboard, but it felt very clunky and downright impossible. In any case, there were times when I felt like giving up, only to watch the videos I recorded to see my own mistakes.

“I should’ve dashed to the left instead of trying to get that last hit,” I’d think to myself before retrying and giving it another go. And I kept at it, one death after another, just to feel the rush of adrenaline as I triumphed over my vanquished foe. Then, it was back to the old drawing board since another boss fight meant that I had to learn new patterns and cues. 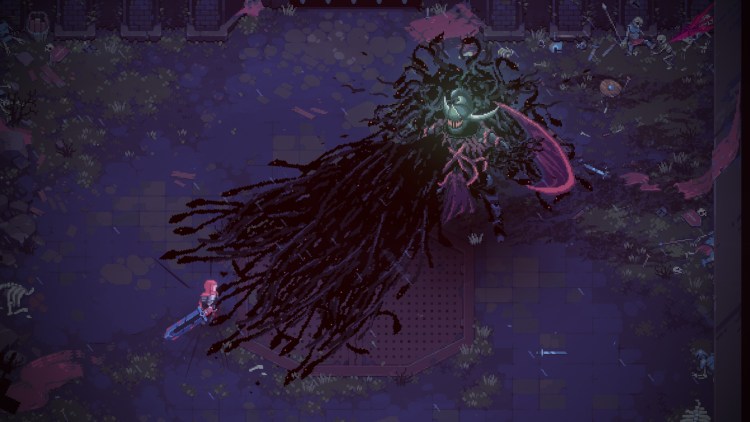 Eldest Souls does have a few problems

Regrettably, Eldest Souls does have a few issues. For one thing, your character is egregiously slow and you only have a sword (which means you’re limited to just melee attacks). Early bouts against faster targets or those who can teleport are quite annoying, as though the nameless warrior can’t keep up with fast-paced combat. The game does pick up considerably once you unlock perks and shards that improve movement speed, so that’s a good sign.

Still, a couple of issues I do have are regarding accessibility. Two of the bosses, Eos and Hyem, have abilities and “tells” that eerily match the color of their arenas. It was very hard for me to discern these indicators. Since Eldest Souls doesn’t have any accessibility or visual options, my only recourse was to lower my TV’s contrast and increase the color saturation if only to help me differentiate between these effects. It’s a far cry compared to other bosses who do have spells and abilities that are easy to see (i.e., crystals, bright lines, and auras that are visible on the ground).

I do think Fallen Flag Studio would be able to remedy these kinds of issues (and I doubt changing the color of an effect would drastically alter the difficulty either). I’d liken it to what was done in the Azikel encounter demo based on what I saw from YouTuber MythyMoo. In the video, Azikel’s Celestial Rain ability spawned red and white fractures, both of which glowed brightly. You had to guess which one will erupt first depending on the color of its wings. However, in the Eldest Souls review build that I played, only one fracture glowed at a time since that’s the one that would erupt. 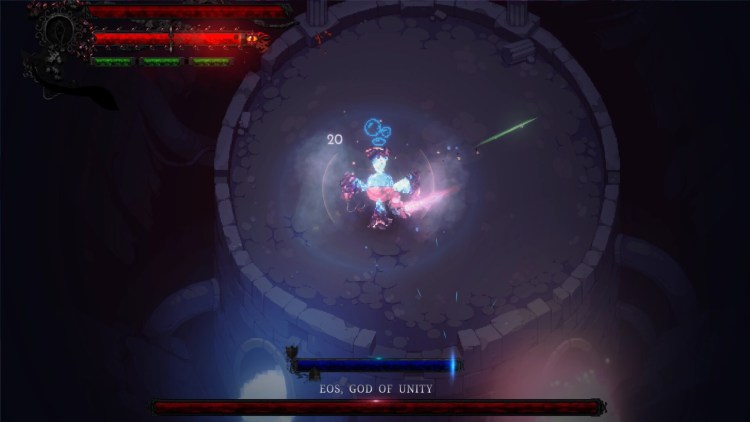 What’s next after beating the final boss?

Your journey in Eldest Souls doesn’t end after you’ve defeated the final boss. That’s because you’ll be able to unlock New Game+ and Arena Mode. New Game+ allows you to retain all the talents and shards that you’ve obtained, leveling them up as you defeat the same bosses. Your enemies will be tougher this time around and they’ll have new abilities. For instance, the Watchdog (the first boss) will have a massive screen-wide AoE blast that cuts down your HP bar by three quarters. Because this is cast periodically, you have to be absolutely perfect with your attacks and movements. As for Arena Mode, you can fight every opponent that you’ve bested, including their New Game+ variants, without necessarily going through the whole campaign.

All in all, Eldest Souls offers refreshing combat mechanics and extremely challenging battles. I enjoyed the difficulty threshold, even though I felt like I was hitting a brick wall at times. However, the feeling of frustration was replaced by cheering and satisfaction after I succeeded. Lastly, a full run should last you around 10 hours, but you can try the aforementioned options to increase your playtime. Unfortunately, these weren’t enough to keep me engaged. Still, things might be different for those who prefer speedruns or “no-hit” runs just to up the ante. 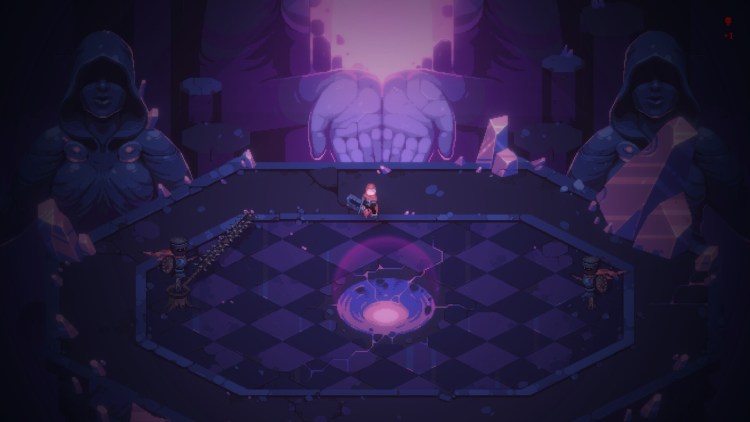 Eldest Souls will punish you with its difficulty, but you're going to love it thanks to refreshing combat mechanics and ridiculously frantic boss fights. However, you might encounter a few issues due to visual miscues, and replayability is solely dependent on how much you wish to rerun tougher encounters.