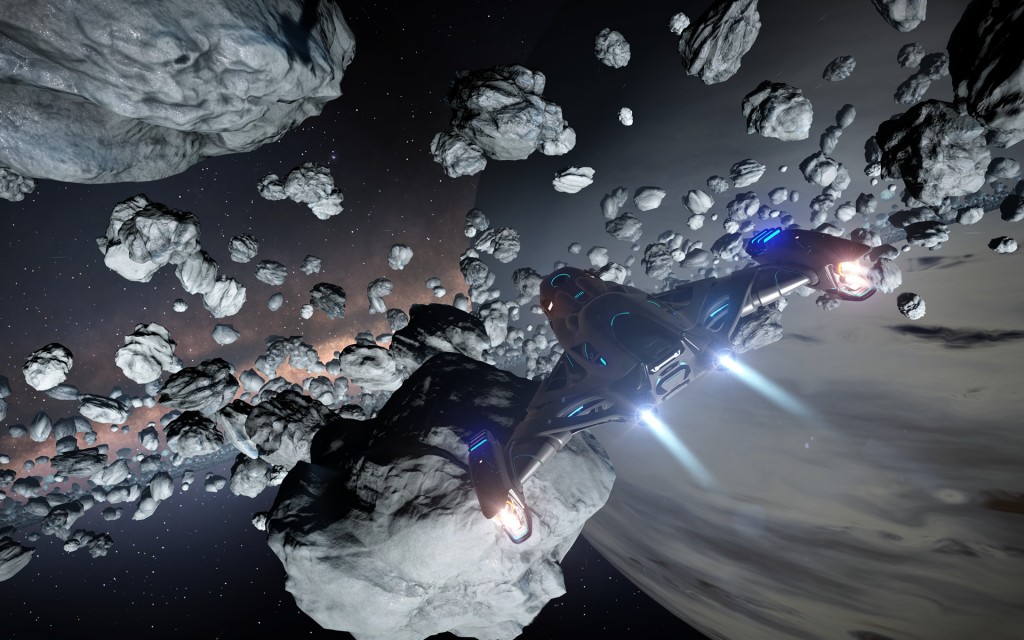 These asteroids will be staying online.

The latest Elite: Dangerous newsletter (#50) is a busy one, dealing with both the upcoming launch of Beta 3.9 and answering more queries about the removal of offline mode. Let’s begin with the latter, since that’s what has been gripping the game’s community for the past few days.

David Braben has made a statement about it, in which he says he’s “really sorry this has upset people,” but “we have a strong, consistent vision that we do not want to compromise.” He adds that the team believed they could support an offline mode at the start of the project (though it wasn’t, initially, part of the plan) and says “We had considered that an online connection is a reasonable pre-requisite for a game delivered online.”

After that, there’s a fairly lengthy and substantial FAQ about the removal of offline from Elite: Dangerous. It covers much of the same ground as the initial thread about the topic on the game’s forums (clarifying that there’s still a single player mode and so on,) but also contains some interesting new bits of information.

Perhaps of most importance to some will be the refund policy. Here’s how Frontier is dealing with refund requests:

–    Those who have pre-ordered an Elite: Dangerous release version from our online store and have therefore not yet played the game are eligible for a refund.
–    Those who have already been playing the game online in the Alpha and/or Beta phases, regardless of whether they backed the project via Kickstarter or purchased access to Alpha and/or Beta through our online store, are not eligible for a refund.

Basically, they seem to be taking the line “if you’ve been playing the always-online game in beta up to this point, you’re not getting a refund for being upset about the game being always-online.” If you circumstances don’t fit with either of the above criteria, Frontier will “look into individual requests.”

There’s also a semi-apology (or at least acknowledgement of a mistake) with regard to how poorly this decision was communicated to the player-base.

In retrospect we should have shared the fact that we were struggling with this aspect with the community, but we were still trying to find a solution. As features were implemented, for the best results we chose to prioritise delivery of the online single and multiplayer experiences, with a view to providing the offline version later in development. We had to make a decision for the good of the game, and that is what we did.

If you’d like to read the Offline Mode FAQ in full, here’s a repeat of the link to the latest newsletter.

Beta 3.9 is due tomorrow (20 November,) with Gamma 1.0 scheduled for release the following Saturday (22 November.) Frontier has confirmed that there will be a data wipe for both Beta 3.9 and the Gamma, so if you want to go out in the blaze of glory before they do that, now is the time.

The Gamma 1.0 phase will be about “polish, fixes and optimization rather than major new features” leading up to the 16 December launch date.

Beta 3.9 will bring the ability to progress through ranks via trading and exploration, as well as combat. It’ll also add the ability to barter with players in deep space and transfer (non-stolen) goods to their vessel. Ship outfitting and the galaxy map are both said to have had a “major overhaul,” and (finally) open-mic voice chat between up to 6 players in a group will now be possible.

Plowing Down the Hours: Farming Simulator 2015 Review for PC