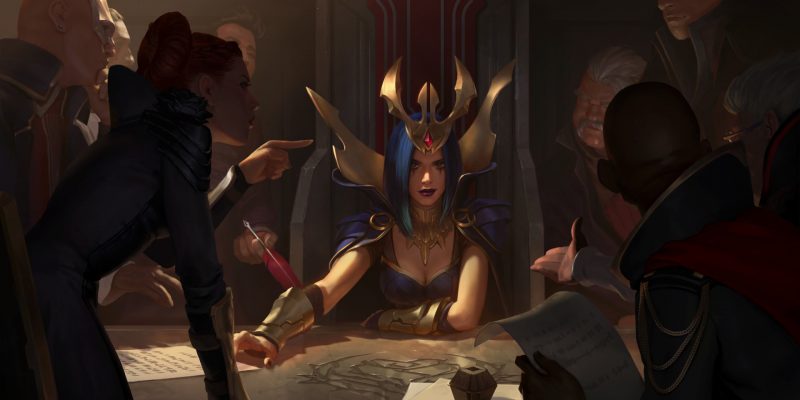 Last week we were contacted by Riot Games to get an exclusive early look at the next set for its smash hit digital card game Legends of Runeterra. This new set, titled Empires of the Ascended, focuses on the Egyptian-themed Shurima region.

The set contains eight new champions and 110 brand new cards altogether. There will also be an event pass similar to the one used during the Spirit Blossom Festival event. Three new keyword abilities are also introduced in the set: countdown, predict, and reputation.

Countdown cards feature a timer that will tick down with each passing turn, and once it hits zero the effect will activate. Some countdown cards also have secondary conditions that will speed up the countdown, like leveling up your champions.

Predict is my favorite new keyword being added and functions similarly to the scry mechanic in Magic: The Gathering. It lets you pick one out of three cards in your deck, shuffle your deck, and put the selected card on top. This lets you plan your next few moves by stacking your deck in your favor, so naturally it is very powerful. But the real strength comes in when you use predict on your opponent’s turn, setting up your draw for the next turn. 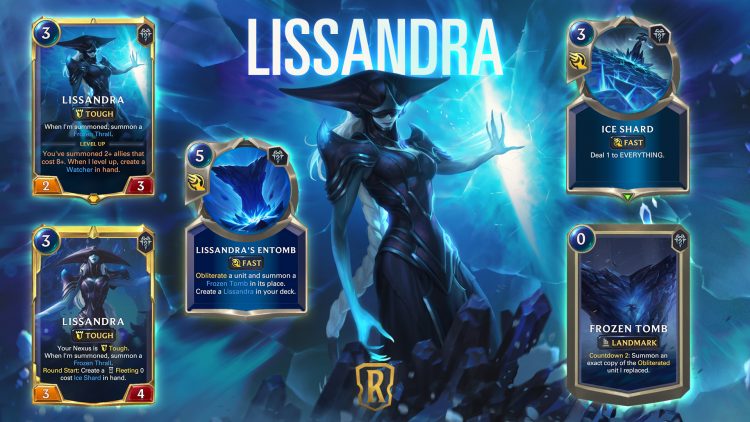 A reputation for destruction

Reputation is a unique ability that helps aggro focused decks. When a unit with reputation deals five or more damage at least four times, its reputation ability will activate. This ability not only rewards aggressive decks for attacking, but puts pressure on the opponent when these units are on board. Reputation allows you to get your opponent to play right into your hands as they spend resources to deal with the reputation unit as opposed to a bigger threat you may have.

As a fan of character loyalty, I also appreciate the new mastery crest system. When you use a specific champion frequently, you are rewarded with items, cards, and other types of loot. Not only does this promote character diversity, it can also lead to lesser-known champions to be played. This will expand the cardpool of champions used, even if they aren’t meta. A 2v2 lab is also being introduced in this new update, and after much player feedback the deck slots will expand from 30 to 50.

Of course Shurima will feature its own region road. Other regions will also get extensions to their own roads for the ones that receive new support in Empires of the Ascended.

Inside this card there are two wolves

During our preview, and after a brief talk with some of the designers at Riot, myself and a few other writers got to play with the set ourselves. We were able to test out the new 2v2 mode, as well as play with premade decks built around the new champions. Even though it was a short amount of time, I got to play a few matches with each champion and get some general thoughts on them.

Right off the bat, the new champion Kindred seems like she will be very powerful. When leveled up, her quick attack ability allows her to gain +2/+2 before being attacked. This means that, without any extra buffs, you will need at least a 5/6 unit or champion to take her down. Considering how fast Kindred can level up, this could prove quite difficult. 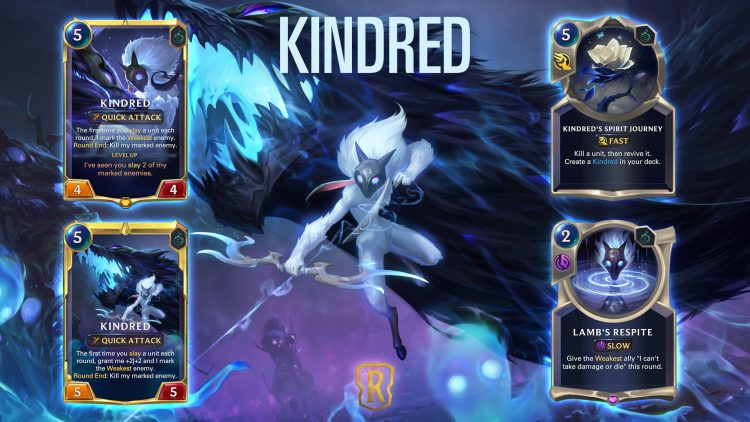 Kindred is easily the immediate standout of the new batch of champions. She can level up fast, pressure multiple units at once, and can dominate the board in the early game. Also, cards that force strikes outside of combat will be very powerful with Kindred, as her buffs are permanent — they do not go away at the end of the turn.

Not all that shines

On the other side of the spectrum, some champions might need extra work. Sivir seems a bit too underpowered. She requires a lot of setup for not much reward — especially when compared to other champions, even within Shurima. She also takes too long to level up. Taliyah also feels very weak. Her landmark strategy is cute on paper, but is far too slow and relies on you having a lot of landmark cards in your deck that don’t put pressure on the board.

There are a few good landmarks, like Emperor’s Dais. When allies attack with a Dais on the board you can summon a fleeting Sand Soldier. Which helps champs that require multiple summons level up, and puts extra pressure on the board.

However, more often than not, even if you manage to set up some landmark plays, the reward doesn’t feel worth it. Taliyah feels very weak in the early game, and she can get steamrolled very quickly. Sivir also shares this same early game weakness. This is made even more clear when Leblanc, another glass cannon-type character card that focuses on dealing heavy damage, just feels like a better version of Sivir. 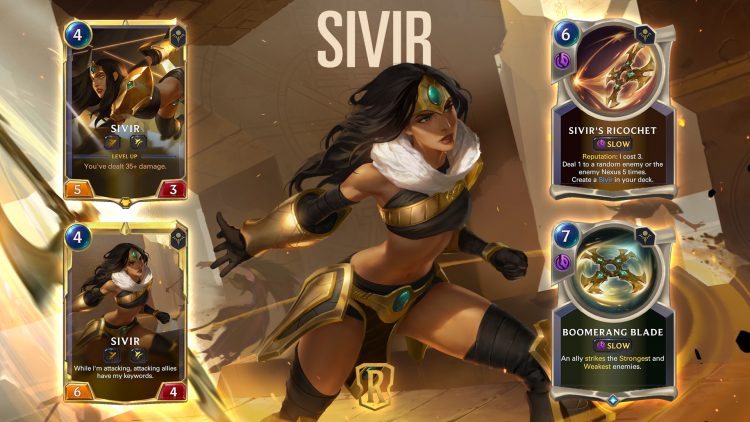 A little more teamwork for the team

I was able to play some of the new 2v2 lab and, while the concept is solid, it lacks in execution. The interactions you can make with your teammate are exceedingly limited. While you can use emojis, mark cards on the board, and check out their hand and board, a third-party app like Discord feels necessary. While I don’t see something like voice chat getting added into the game, even a simple text box for teammates would do wonders.

My favorite champions I used during my time with the set were Nasus and Azir. They sync incredibly well when used together in the same deck. Both Nasus and Azir both have level threes, and I was able to get them both to their third level at seven mana. They are also quite good late-game champions, and with support like Golden Ambassador, they can easily make it to those late-game turns. Speaking of Golden Ambassador, it feels like every deck with Shurima champions needs to run a playset of her.

One of my favorite combos was using Penitent Squire with Honored Lord in hand to give it Challenger with Tattered Banner. This also gives Honored Lord barrier when he challenges, which is incredibly effective against champions like Kindred. This is a great turn 1/turn 2 combo that only requires two cards to set up. This combo is great in decks running Renekton and Jarvan IV. Both of whom make for a decent mid-range swarm deck. 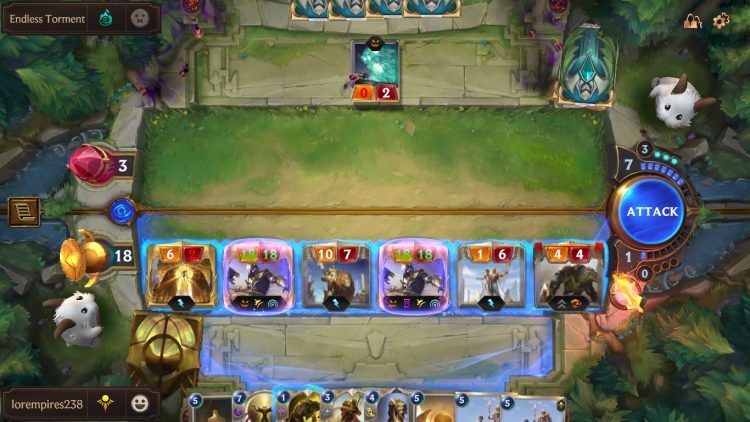 Will the Empire’s reign last?

Empires of the Ascended is one of Runeterra‘s biggest expansions and it shows. While some cards are disappointing or feel underpowered, there are plenty of new cards to get excited about. But, since this preview was played in a vacuum, it remains to be seen if it will be able to stand up with some of the other tier 1 decks in the meta like Targon- and Celestial-based builds. Empires of the Ascended releases tomorrow, March 3, and you can download Legends of Runeterra to play right now for free. You can also find all of the cards revealed for Empires of the Ascended so far, updated with each new one, by heading here.

By Jason Rodriguez19 hours ago
Previews