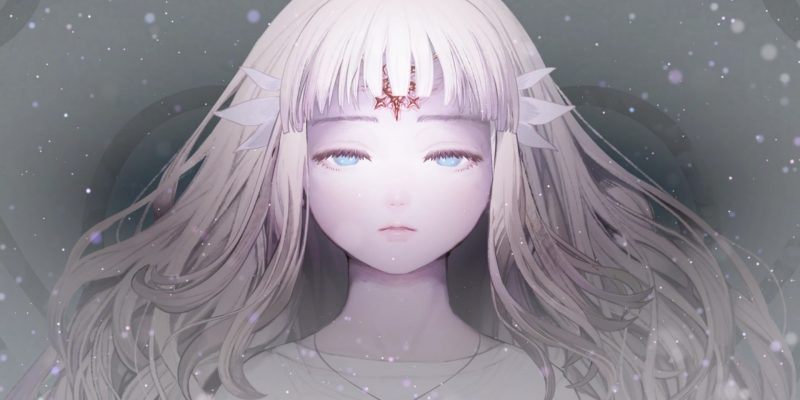 I must admit, I get giddy whenever I get to play a decent Metroidvania game. It helps that some recent releases in the genre have all been well received. Examples include Bloodstained: Ritual of the Night (you can check our guides hub for this), Salt and Sanctuary (which has a sequel that’s set to release next year), Hollow Knight (which will also get a sequel), and Vigil: The Longest Night (which I reviewed back in October). That brings us to Ender Lilies: Quietus of the Knights. Perhaps the most obvious question is why games in this genre have “nights” or “knights” in the title.

I digress. In any case, Ender Lilies: Quietus of the Knights has been part of Steam’s Early Access program since January 2021. So far, it has amassed over 3,000 reviews and is sitting at a comfortable 95% “overwhelmingly positive” rating. But that’s for the Early Access build, one that only has three bosses and zones. The full release version, which comes out on June 22, has a total of nine bosses to fight and nine areas for you to explore, with countless power-ups and secrets to discover.

Ender Lilies: Quietus of the Knights takes place in the kingdom of Land’s End. The once majestic castle and vibrant countryside are now but shells of their old selves. Buildings are in disrepair, banners are frayed and tattered, and death hangs in the air.

This is all due to the Blight, a curse that has permeated in this region. The Blight has turned the denizens of Land’s End into undying beings, and proud guardians have become grotesque monstrosities. A young White Priestess named Lily wakes up all alone in a chamber. Soon, the spirit of the Umbral Knight, her protector, promises to aid in her journey.

Compared to the rather clear-cut narrative common in Metroidvanias, Ender Lilies opts for dark fantasy themes. Grim recollections and cryptic clues, akin to Souls-like offerings, will help you piece together what happened to this forsaken place. 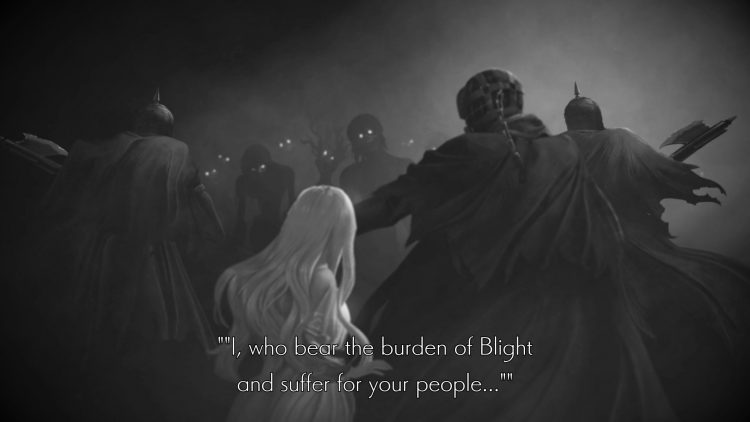 Fans of Metroidvania games will feel right at home in Ender Lilies: Quietus of the Knights. The genre emphasizes 2D side-scrolling and platforming, so you’ll go from one room to the next. You’ll take out foes, mantle on ledges, and discover secrets. As mentioned earlier, there are nine large zones for you to visit, each with several interconnected rooms. From the White Parish, you’ll eventually reach the Cliffside Hamlet and Witch’s Thicket. From these areas, you’ll get to visit the Catacombs, Stockade, Twin Spires, and more.

Although traversal might seem awkward at first, you’ll realize that this is because Lily is just a small child. She’s not going to start the campaign with rolling dodges or backflips like a ninja or half-human, half-vampire hybrid. Jumping will look and feel clunky, but that’s to be expected. Fortunately, there are several methods to traverse locations such as regular double jumps, hook points, and even streams that let you swim upwards. 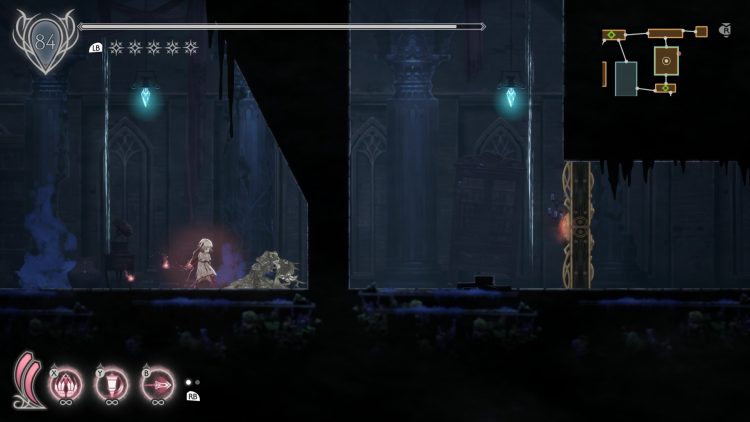 Regarding secrets, these range from breakable walls, hidden passageways, and unlockable doors that require the usage of certain skills. You’ll end up backtracking to previous areas just to try new power-ups that help you traverse other sections of the dungeon. The only downside here is that the game uses rectangular blocks to represent rooms. The entire layout is seen once you enter, unlike in Metroidvania games where the map is slowly filled as you reach various nooks and crannies. Thankfully, the map is color-coded to show you which rooms still have secret items and which ones have been fully explored.

It helps that the art design of each location is marvelous. There are visually striking backdrops from snow-capped battlements to skeleton-filled crypts, and gardens backed by scenic waterfalls in the distance. Likewise, the musical score is hauntingly beautiful. As you play and reach new areas, there’s a sense of loss and tragedy punctuating Lily’s own story as she progresses further. My only gripe when it comes to the audio department is that the voice acting is almost null whether you’re fighting or watching cutscenes. 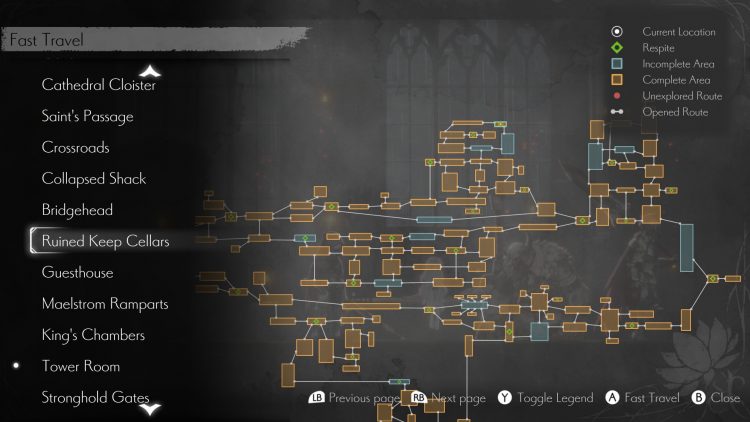 Skills and relics in Ender Lilies: Quietus of the Knights

At the start, Lily only has the Umbral Knight to help her out. Soon, she’ll be able to “purify” the spirits of enemies (both bosses and mini-bosses), allowing her to summon their abilities. For instance, the Umbral Knight has quick sword slashes. Meanwhile, Gerrod, the Elder Warrior, manifests his power through the slow swings of his hammer. Loads of other abilities can be obtained like a spinning tornado (Floral Sorceress), a teleporting slice (Dark Executioner), a block followed by a counterattack (Hidden Test Subject), as well as a toxic mist (Forsaken Fellwyrm).

It’s up to the player to mix and match, as there are two loadout sets that let you select up to three abilities/attack types. Abilities can be leveled up by collecting resources, too. Also, you’ll gain a perk that allows you to cast a spirit’s super energy known as the “Last Rites.”

Moreover, you can find various relics or accessories that boost Lily’s capabilities. Some increase the number of prayers (healing potions), while others boost her HP, damage, or mitigation. Perhaps the only misstep here is that you need to be at a respite or save point in order to change your spirit skill loadout and equipped relics, which momentarily takes you away from the action. 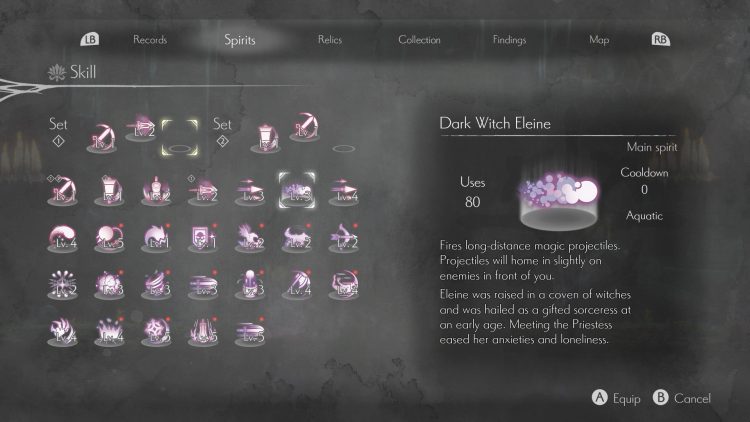 The gritty and dark atmosphere isn’t the only Souls-like theme present in Ender Lilies: Quietus of the Knights. There are also battles based on pattern recognition, player skills, and reflexes. Lily begins with a clumsy dodge that’s going to leave you scratching your head if you’re keen on focusing on invincibility frames. Soon, though, she’ll have additional means that complement the abilities and equipment mentioned above. These include a relic that lets you parry to nullify an instance of damage, as well as a dash move that works on the ground, while swimming, and in mid-air. There are key moments when you’d use perks to pull yourself upward with a hook point, slash with a spirit’s sword, double jump, dash while in mid-air, pop a shield, then crash down with a ground smash. The possibilities are endless, making for a uniquely engaging experience.

Sadly, there’s something off with the poise system. Sure, enemy mobs can be staggered and downed if you break their poise with successive attacks. However, this mechanic rarely applies when you parry. As such, it’s possible to break a hostile’s poise meter by doing a perfect parry only to see them recover almost immediately. 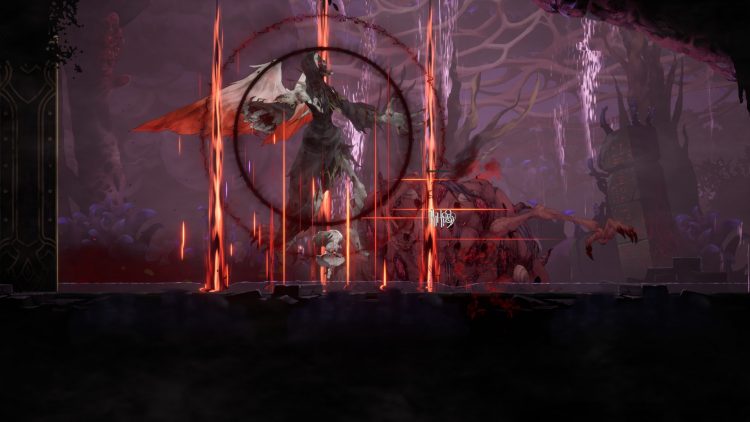 Fortunately, the boss fights in Ender Lilies: Quietus of the Knights are amazing to behold. Although the first few bosses that were made available as part of the Early Access period can be pushovers — well, except for Dark Witch Eleine — the challenge ramps up considerably later on. All bosses tend to use new abilities or gain boosted speeds at certain health thresholds. Some even have multiple phases leading to hectic engagements. One false move or a foolish attempt to parry can leave you open to a devastating attack.

Perhaps the only issue I could think of is that the game starts to rely on cheap tricks towards the end. For example, the Verboten Domain zone is filled with Blighted mists and poisonous bodies of water. Although you can equip a relic to mitigate the damage slightly, you’re still losing a lot of health. 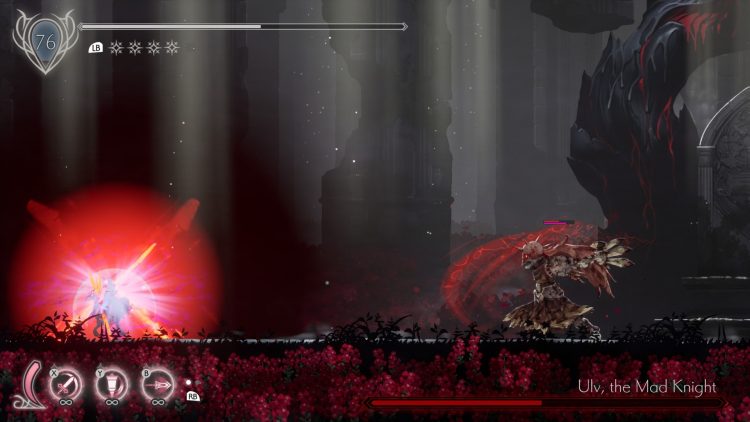 Is Ender Lilies: Quietus of the Knights worth your while?

Ender Lilies: Quietus of the Knights isn’t a masterpiece. There are a few qualms that I cited earlier. Naturally, this is a game that you’re better off playing with a gamepad. You can rebind gamepad buttons and keys, but a mouse and keyboard setup was tough to use. At the very least, I didn’t notice any major technical hiccups such as slowdowns or freezes. The game did crash once when I visited a particular location, but it didn’t happen again afterward.

One key point that needs to be addressed is that there’s almost no replayability. You won’t see an additional selectable character, extra difficulties, or a boss rush mode. One playthrough will take you roughly 12 hours to complete (more if you want to find all the secrets and grind extra levels). Once you’ve seen all three endings, though, there’s nothing else to look forward to.

The lack of replayability can be bothersome, to be sure. However, I would say that Ender Lilies: Quietus of the Knights more than delivers in other aspects. You’re going to explore, fight, experiment, discover, die, and continue until you finish the journey. And you’re going to have a great time while you’re at it. 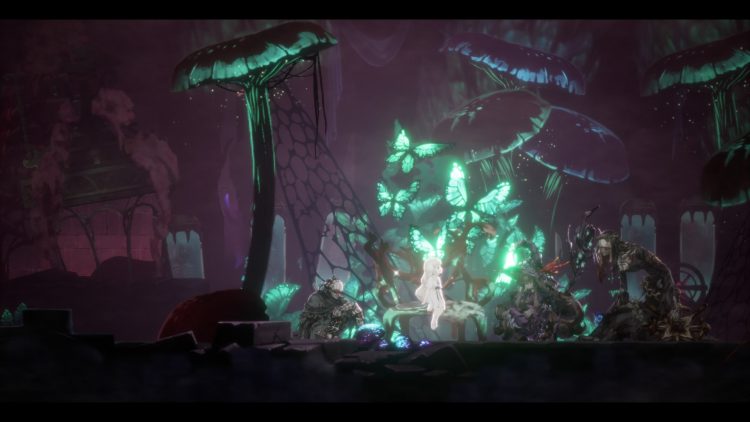 Ender Lilies: Quietus of the Knights

A Metroidvania game where you control a little girl who's surrounded by cursed enemies.
8.5

Ender Lilies: Quietus of the Knights does have a few issues. Overall, though, it more than delivers thanks to vibrant visuals, top-notch Metroidvania platforming, and challenging Souls-like combat.