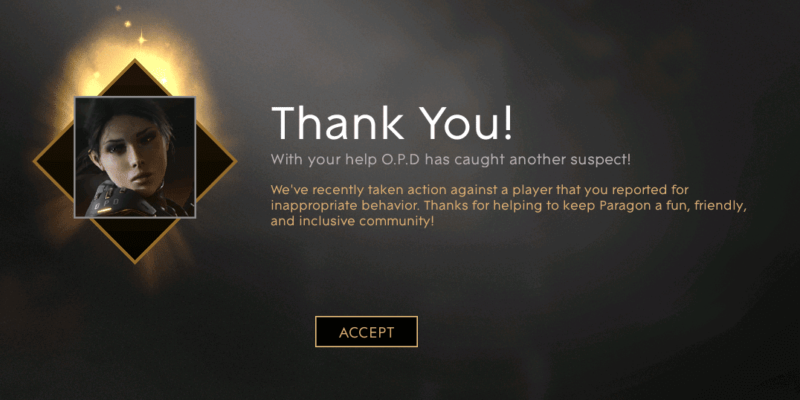 If there is one thing I cannot abide by in Paragon it’s abusive players and players that go AFK. It simply ruins a game. With only five on a team, when one player goes AFK it’s a real struggle to win. You can win but you need a great team around you, and in random matchmaking, that can be hit or miss.

Epic has decided to now inform players when an abusive player has been flagged and caught by the system. Right now you have no idea whether reporting a player does anything at all. You just have to hope that player is being punished in some way for their abusive actions.

In the future v.40 update, when a player is reported you will now be notified that the player has been caught by the reporting system and are shown this new screen.

There are also more systems going in place. Epic says,  “It doesn’t stop here, we plan to take some more steps to address other areas of player toxicity both chat harassment and intentional sabotage in the future.”

While abuse is still a problem it’s not nearly as bad as it was in the early stages of the beta test. Thankfully most games played now conclude without incident. However, AFKers can still be a problem.