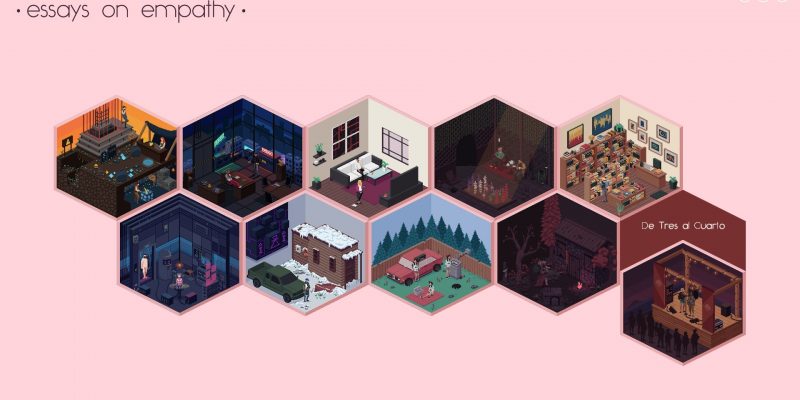 Devolver Digital is always surprising us. Famous for its weird games, this May the publisher announced Essays on Empathy, which is a game and not a collection of writings you’re meant to analyze for a composition course. The title is a compilation of 10 interactive stories, all with a variety of characters and strange premises. One story is about flower arrangements made by a hitman. Another is a deck-based game where you help comedians progress in their careers. Yeah, this is a Devolver Digital game, all right.

Essays on Empathy was developed by Spanish developer Deconstructeam, of which you may know from The Red Strings Club. The latter game is a cyberpunk story about a bartender mixing drinks to evoke certain emotions. You probably won’t be shocked to know that Devolver Digital published that one as well. If you’re really itching to play the collection, you don’t have long to wait, as it’s set to release on May 18.

The press release even contains this: “It’s not the sort of role play I’m a connoisseur of,” growled Fork Parker, Devolver Digital CMO. “But 10-for-1 is a good deal no matter what your kinks are.”

I couldn’t have said whatever that is better myself. True to form, Devolver.

But that’s not all. Act now and you’ll receive premium bonus content for Essays on Empathy. This includes a mini-documentary, sketches, and design insights. That’s all perfect for the discerning player who wants to know why exactly one of the game’s characters is convinced that the skeleton she has isn’t actually hers. It’s worth mentioning that the game also features over two hours of original music by Paula Ruiz, possibly better known as fingerspit. I’m not sure why anyone would want to be known by that name, but, hey, you only live twice. Or whatever the saying is.