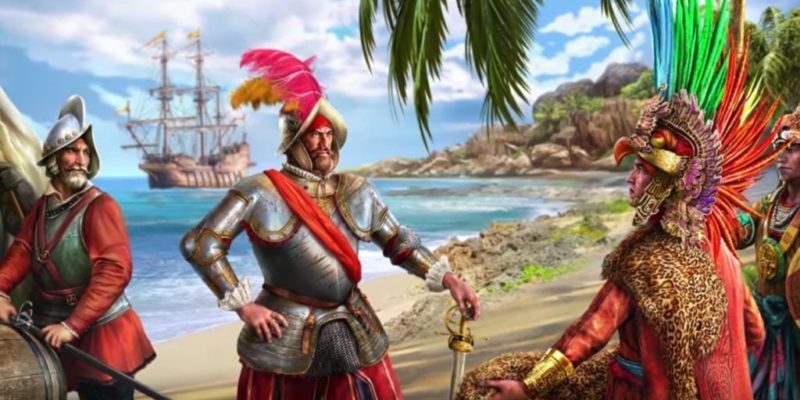 Paradox Interactive has always had a knack for releasing new content packs that add depth to older games. Some have been well-received and others, well, not so much. In the case of Europa Universalis IV (originally released in 2013), the developers have added 12 major expansions and three Immersion Packs. The third and latest of these — Golden Century — focuses on Spain and the rest of the Iberian Peninsula, Northwest Africa, and Pirate Republics.

As the resident Paradox Interactive grand strategy aficionado of the team — as you can see from my recent reviews of Crusader Kings II: Holy Fury and Stellaris: MegaCorp — I decided to see what this Immersion Pack is all about. Granted, I only own Europa Universalis IV, Rights of Man, Art of War, and Common Sense from the Empire Founder bundle. The lack of other DLC notwithstanding, the playthroughs should hopefully remain smooth. 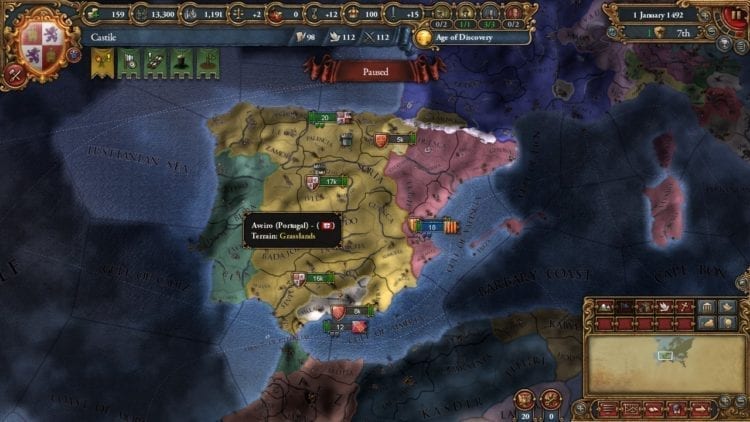 New provinces to conquer… and slow you down.

As someone from the Philippines, I chose Castille just so I could recreate the colonization of my motherland. It makes sense, after all, Europa Universalis III essentially made me appreciate my country’s history even more because of untold tales about Ferdinand Magellan.

Going back to Europa Universalis IV: Golden Century, one of the main hooks this Immersion Pack has would be the changes to missions and idea groups for select nations. Castille, in the past, had a very barebones mission tree. The revamp this time around leads you to a fairly detailed historical path to colonization. In fact, one of the final missions you can complete is the conquest of Las Islas Filipinas. 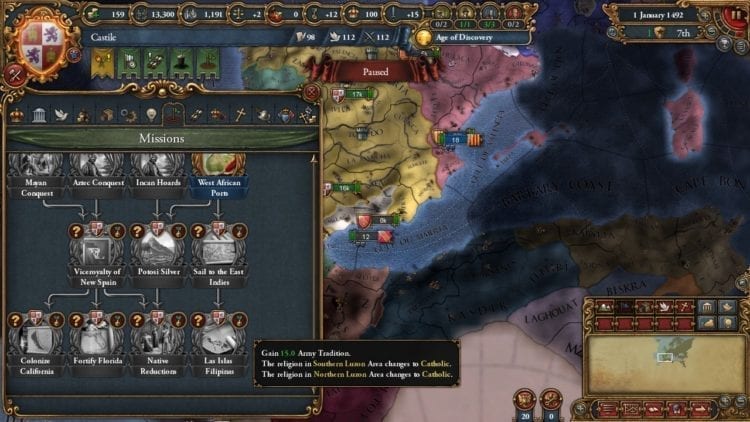 “Time to conquer my native lands! Surely Jose Rizal and Andres Bonifacio would be rolling in their graves.”

While the Philippines might be our destination, the journey isn’t as easy as it seems. Obviously, I’d have to find a means to increase my colonization range. I did that by way of an advisor and the correct idea groups. Unfortunately, even after all that, my colonial range wasn’t up to snuff. I had to go the ahistorical route by colonizing Suriname (historically, this was Portuguese territory).

It looks like subsequent updates since Europa Universalis IV originally launched have drastically changed the world’s layout as well. I vaguely remember Cuba and Hispaniola only having three provinces each for the previous game. This time around, they have seven and nine respectively. That’s put a damper on my rapid expansion. 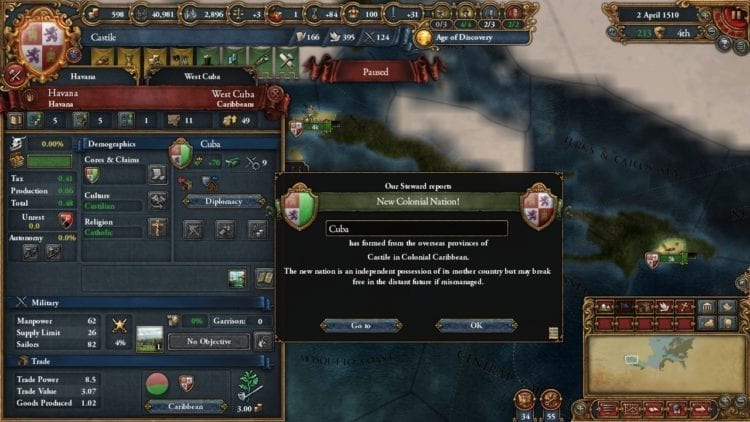 A key mechanic in Golden Century is the ability to deport minorities to your colonies. This creates a cultural melting pot in the New World while keeping your homeland homogenous. Yes, this did happen historically with Spain’s forced conversion and expulsion of Jews, as well as the Moors and their Morisco descendants. A majority fled to North Africa and the Maghreb coast, however, while some did find themselves in the New World. In the game, I didn’t find much use out of this given that cultures tend to drift and become accepted as part of your empire in due time. 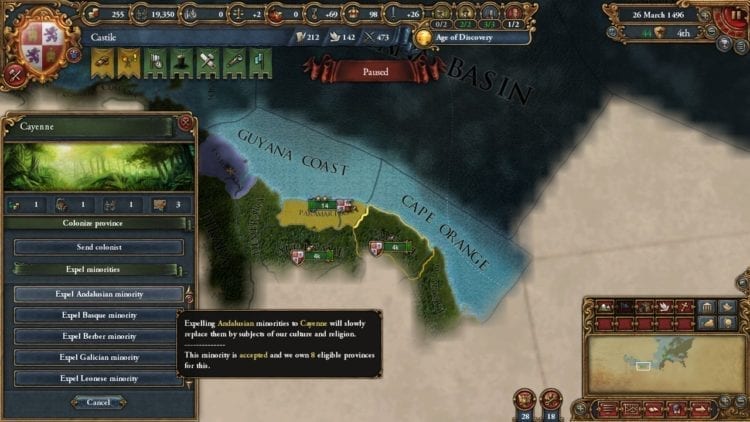 Paradox Interactive games: Where you can recreate historical atrocities, in a detached way, with the click of a button.

What I did get more use out of were the Holy Orders. You can now assign Holy Orders to cored provinces/states which can help lower revolt risk or increase production. This is helpful in the long run given how Jesuits and Franciscans not only helped convert the native populations, they aided in cultural reforms.

It’s not just Castille that has access to Holy Orders; all Iberian Catholic nations can do this. In fact, all Iberian nations and Northwest African lands have had significant changes to their mission trees.

In the case of Morocco, Fez, and parts of Northwest Africa, their missions revolve around recapturing lost territory and strengthening their Islamic base in Andalusia (southern Iberia). For poor Granada (which is on the ropes if you start the game in 1492), they have missions to counter the Reconquista and perhaps even have the entirety of the peninsula in Muslim hands. 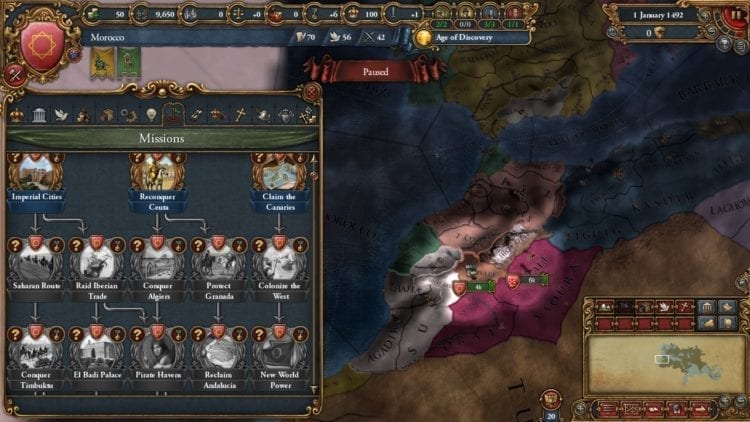 Poor One-Province Minor (OPM) Morocco has a tall task ahead, perhaps only matched by Navarra’s goal of conquering France.

For Navarre, they have a wildly ambitious mission tree that leads them to recover lost lands and even subjugate the Big Blue Blob (BBB) known as France. As for Aragon, their focus is becoming a Mediterranean powerhouse. The star, however, is Portugal.

While Portugal is oft-considered playing the second fiddle to Castilian/Spanish colonial dominance, it had, for a time, surpassed its Iberian cousin. Portugal’s missions lead to new trade opportunities from the Middle East, to India, to ports in China and Japan. In the end, should Portugal face insurmountable woes, they even have a decision to send their entire court to Brazil, establishing it as the primary nation. This would unlock an entirely different mission tree as well. 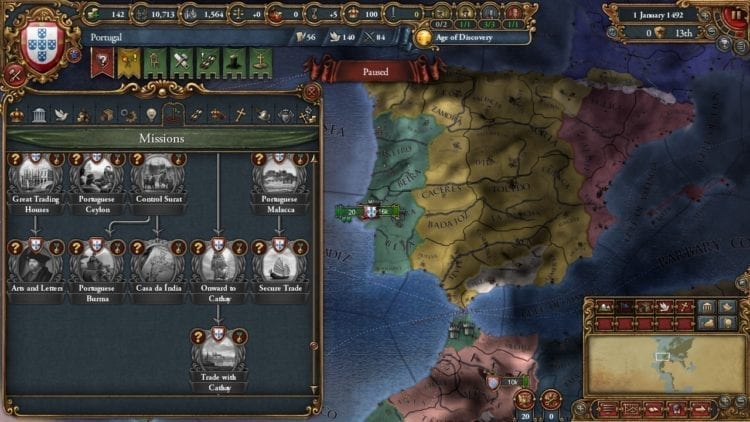 A Pirate’s Life For Me

Given that Golden Century focuses on maritime exploration in the Europa Universalis IV game world, then piracy would definitely rear its ugly head. No, friends, this isn’t a case of digital privateers torrenting the game; it’s actual piracy in the high seas in the form of Pirate Republics. While piracy has existed in Europa Universalis IV, and past expansions even had additional tweaks, Golden Century finally allows players to live the life of a swashbuckler.

Multiple Pirate Republics can emerge during your playthrough whether by a random event or through your own decisions. Examples include the Pirate Republic in the Caribbean based in the Bahamas (sans Jack Sparrow) and the infamous raiders of the Barbary Coast. There’s even a pirate nation off the coast of Madagascar. 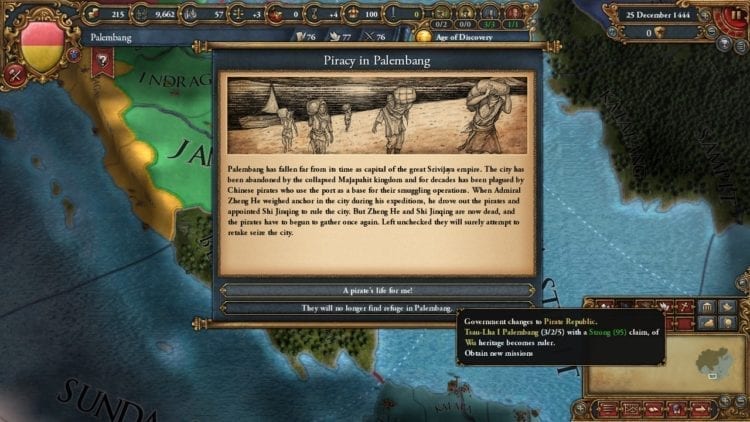 Palembang’s instant decision in 1444 to switch to a Pirate Republic.

If you’d like to quickly play as one, you can select the 1444 start date and choose Palembang. This Southeast Asian nation has an immediate decision to accept a pirate lord refugee who immediately turns the state into a Pirate Republic. Now you can happily raid the coasts of Indonesia and the Philippines well before modern-day brigands came to be.

If pirates are getting under your skin, know that you can create flagships (provided that you have the naval manpower and ships to do so), and also bombard coastal defenses. Overall, Pirate Republics and additional changes to naval/coastal combat should be a treat for landlubber strategists everywhere. 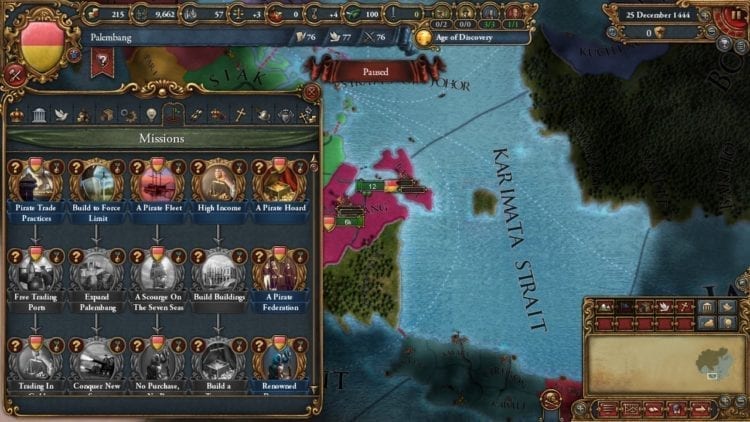 From Cristobal Colon to Hernan Cortes, Francisco Pizarro, Ferdinand Magellan, and the conquistadors of the past, Golden Century brings more flavor to your Europa Universalis IV playthrough. Please note, however, that it also doesn’t do much beyond what it offers for Iberia, Northwest Africa, and Pirate Republics. The free “Spain update” also adds new provinces and missions already for some nations so you wouldn’t really need to spend extra.

From a grand strategy standpoint, you wouldn’t be changing your island-hopping campaign to circumnavigate the globe. For instance, my process in discovering and colonizing the New World, and making my way to the Philippines, has been the same since the previous game (I’d probably need to colonize and core Hawaii if that’s the case).

The biggest challenge you’d face as a colonial empire would be in the form of emerging pirate nations that can curb your trading power. This is a worthwhile change since, historically, European powerhouses did suffer tremendously from piracy and overextension. 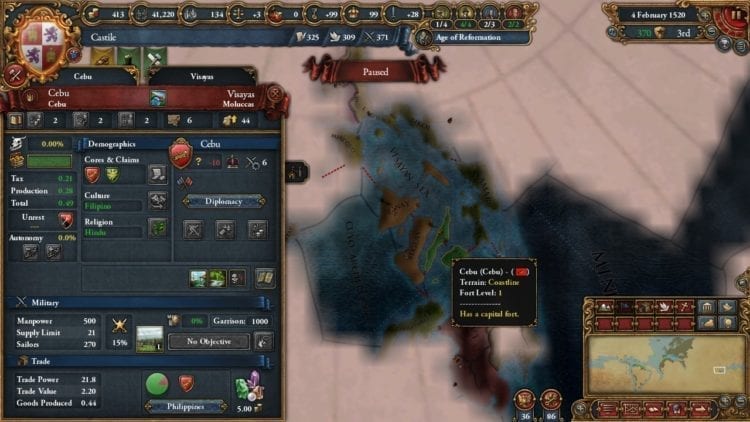 “Hello, my homeland,” I said as Ferdinand Magellan’s last ship sunk to the depths of the Pacific.

Europa Universalis IV’s Immersion Packs aren’t necessarily your $20 expansions that attempt to tweak more encompassing aspects of the game. They’re tweaks for a select part of the world map, much like what Third Rome and Rule Britannia did for their respective countries.

As a result, Golden Century is half the price of what a regular expansion costs, bundled together with cosmetic changes like new unit designs and ship decals. It’s a fair deal for $9.99, at least compared to content packs of yore which you’d need to purchase separately. 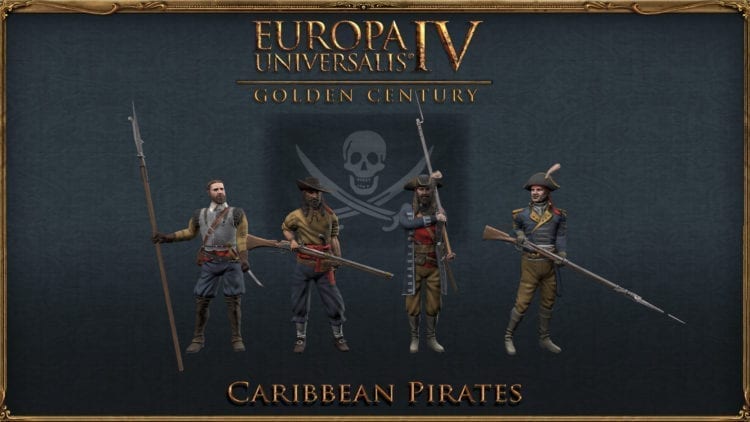 If you’re someone who enjoys playing as Iberian explorers or their North African rivals, or perhaps as a pirate lord, then Golden Century is for you. Consider adding the El Dorado expansion as well if you haven’t done so. Otherwise – if it seems pricey, or these factions aren’t to your liking – then you aren’t missing out on what the base game already offers.

This Year In PC Game Releases: The Highlights Of Each Month In 2018