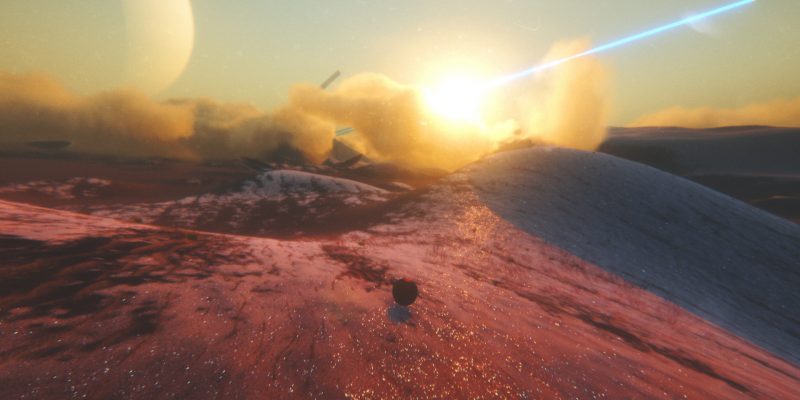 I have a soft spot for games with simple core gameplay loops. Not every game needs engrossing narration, explosive action, or suffocating melodrama to stand out in your memory. Games like Flower, Abzû, or Journey come to mind. I got that same feeling as I watched the new gameplay trailer for Exo One. The game looks uncomplicated, but combines rich and beautiful environments, a delicate yet haunting musical score, with gameplay that’s immediately understood. Exo One appears to be a game that easily sums up the word “experience.”

You fly through the game’s worlds in a strange, alien craft. Close to the ground, the vehicle turns into a ball that swiftly rolls across the land. As a ball, you can climb short hills and leap, giving you speed and distance. The craft also transforms into a saucer, allowing you to glide through the air. Gameplay is generally summed up as swiftly rolling and then leaping into a glide across strange, alien landscapes. In the new trailer for Exo One, it’s shown that you can collect power ups to increase your abilities — such as extending the range of your glide.

Of course, it’s not just about jumping and gliding, although I’d be perfectly set with doing just that. Despite what I said earlier about narration, Exo One does have a story of sorts. More accurately, it has a mystery that unfolds over time. Much with Journey’s imposing mountain, you aim yourself toward “enigmatic alien structures” that lead somewhere. The trailer below shows of the blue planet of Gnowee, one of the worlds you pass over on the way to your unknown goal.

Flying high toward the horizon

Exo One has been in development for more than a few years now. It appeared on Kickstarter back in 2017, bringing in more than $40,000 AU from over 1,000 backers. Currently, the game still doesn’t have a release date. However, it does have a Steam demo you can try today.