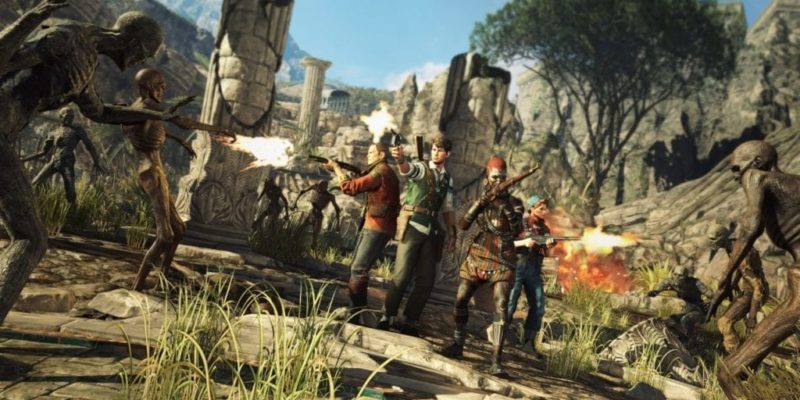 Strange Brigade isn’t out yet, but that hasn’t stopped developer Rebellion from detailing the game’s future. Following the game’s launch, players can expect free monthly updates and a season pass full of exclusive content.

Announced in a pulpy trailer, Strange Brigade‘s season pass includes a three-part story campaign, as well as new characters, weapons, and outfits. The exclusive campaign sees members of The Strange Brigade fighting through waves of skeletons on the Isle of the Dead, exploring the Sunken Kingdom, and narrowly escaping death in the Pyramid of Bes.

Tessie Caldwell is the first season pass character. She’s referred to as a “rebel of the skies,” and seen decked out in era-appropriate aviator gear. Next is Patrick ‘Bash’ Conaghan, a “gold-hunting daredevil” with a penchant for flannel. Anjali Khan has a ferocious pet tiger and the imposing title of “vengeful demon hunter.” And finally, there’s Hachiro Shimizu. As an “unyielding survivor,” Shimizu sounds like a bit of a wildcard.

Strange Brigade is a cooperative third-person shooter with a 1930s explorer theme. Players explore exotic locations full of supernatural creatures and deadly traps on a mission to stop an evil witch queen. Its art direction speaks to a delightfully campy sense of adventure, not unlike the globetrotting films that seem to be a major source of inspiration.

While the focus of the trailer is clearly Strange Brigade‘s season pass content, the decision to release free monthly updates bears repeating. As a cooperative multiplayer shooter, the game will live and die based on its community. Keeping the content coming — be it free or otherwise — is a smart decision in the long run. Strange Brigade hits Steam on August 28.

Steven Universe: Save the Light heading to PC