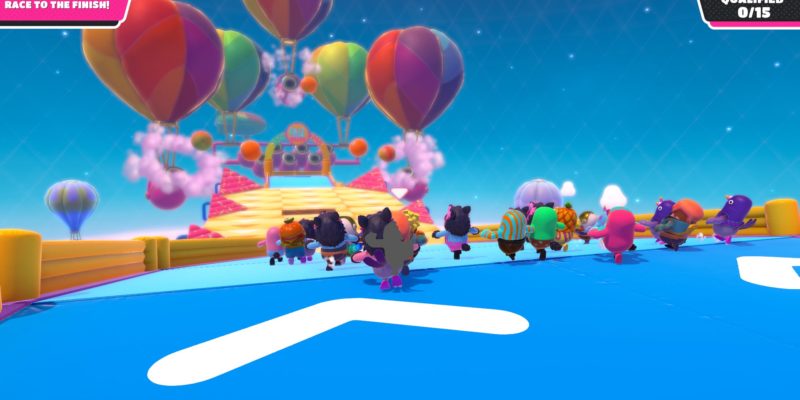 As a rule, I don’t like battle royale games. Fall Guys: Ultimate Knockout, which takes elements of battle royale games and puts them in a different format, seemed like the sort of thing that would be the exception to the rule for me. Sadly, it wasn’t. But that doesn’t mean it’s a bad game. It’s bright, colorful, creative, and entertaining and people who find its premise alluring will likely have a good time, even if they might get sick of some of the stages after a few hours.

Race to the finish

The gist of Fall Guys is simple. You’re one of 60 contestants competing in a game show. The show is typically made up of five rounds and losing contestants are disqualified at the end of each round. There can be only one victor who will leave with a crown in tow. Everyone else will get experience and some currency along with a pat on the back.

The events you’ll be taking part in are akin to game shows like Wipeout and the like. You’ll typically be making your way through obstacle courses or team games to stave off disqualification as long as you can. Each round you survive will net you more experience and currency which you’ll use to progress in the game’s seasons, as well as buy cosmetic items in the shop. Additionally, winning will net you a crown, which is also a form of currency you can use to purchase even more cosmetics. 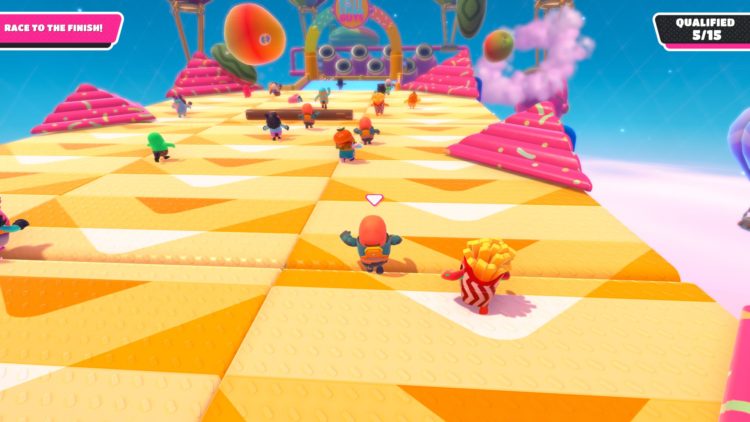 You play as what appears to be a living jelly bean, customizable using colors, patterns, faces, and accessories. There’s a variety of ways to dress them up, but the more common cosmetics make them look wolves, pigeons, boxes of french fries, or pineapples. Pre-ordering the game on Steam netted players a Gordon Freeman skin, complete with a head crab trying to devour his skull. That’s the one I’ve been using because why wouldn’t I?

There’s a solid variety to the types of rounds in Fall Guys. The first round is usually a race through an obstacle course. I find most of these to be fun, such as the one where you run on spinning platforms, or another where you need to maneuver between rapidly opening and closing gates to make it to the end. There’s even one I loathe that sees you platforming on giant see-saws. I hate seeing this one, as it’s a tedious pain, and succeeding is more of a game of chance. If you’re spawned behind other contestants, they’re going to jump on the see-saws first and mess them up, making it all the more likely you’ll fall and be forced to reset.

The second main type of round is the team type. These randomly assign you to a team of a certain color and you’ll have to hope against hope you didn’t get put on the team that sucks. There can be as few as two teams and as many as four. Just like the races, some of these games are fun, while some are kind of awful. In most of them, you want to score points while stopping your opponents from doing so. This generally means grabbing eggs or giant balls and moving them to your team’s areas. 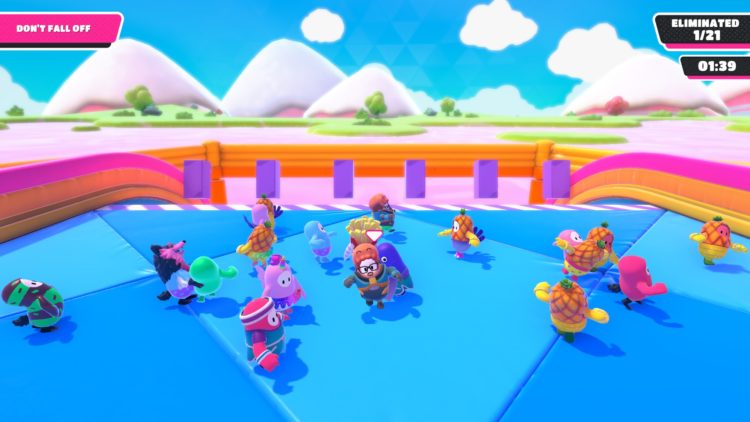 I dislike whenever it comes down to just two teams, though. When it’s three or four, only the lowest-scoring team gets disqualified. But when there are only two, that means half the players are going to get booted to the menu. As I said, it’s completely up to luck whether you’ll get placed on the winning or losing teams and you might as well flip a coin. This is a problem I have with Fall Guys that doesn’t quite apply to most other battle royales, but more on that a little later.

Survival of the fittest

The third main type of round sees you surviving a challenge until a set number of contestants have been eliminated. These also come in several forms. You can be on a series of rotating platforms that you have to move between so as not to fall off. There’s one where everyone is facing one direction and blocks are pushed at you, requiring you to move to avoid them or jump over sections. And there’s one where a few large arms spin faster and faster until a certain amount of contestants are knocked off. These are all pretty fun, but they have a problem. Namely, they’re too easy.

What this means is that these rounds can go on longer than the others as they’re so simple that it’s harder to lose. Much like that one see-saw race I mentioned earlier, this leads to uneven variations. Some rounds are going to be mind-numbingly easy and others are going to be frustrating slogs. It makes Fall Guys feel inconsistent in the moment-to-moment. But there’s also a problem with the frequency with which round types occur. 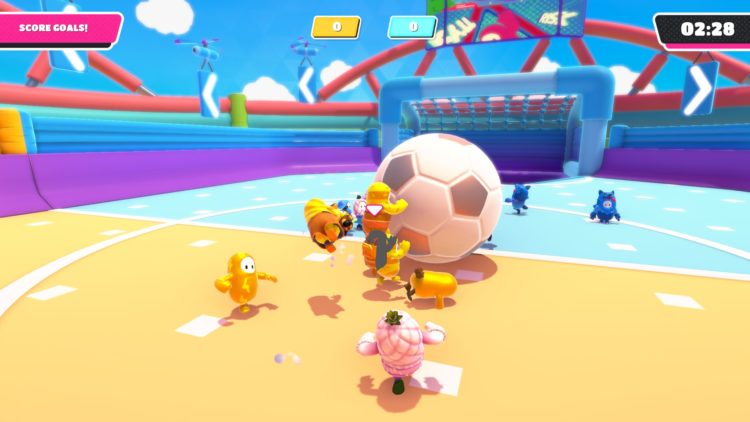 Simply put, some round types are much more common than others. In my time with the game, I often saw the same few round types over and over again. Occasionally, though, a rare one would pop up. I feel like it would only help the game if the balance of common rounds and uncommon rounds was more even, as it would help with the tedium of seeing the same types time and again.

We are the RNG

If other battle royale games are more like Forza, based around understanding the game mechanics and the space in which they’re set, Fall Guys is like Mario Kart. No matter how good you are at it, you’re often going to lose through no fault of your own. I feel like the insistence on team games was a questionable choice in a game like this due to how being placed on a bad team will see you lose even if you perform well.

On top of that, random events out of your control are also going to mess you up. Fall Guys controls just fine, for the most part. It handles simply enough. You’re able to move, jump, and grab items and other players. While this will likely lead to a lot of griefing in the future, people mostly didn’t mess with me, as pissing off someone who can knock you to your doom if you screw up isn’t exactly a great idea.

However, they don’t need to mess with you, as the physics will do that on their own. The bodies of contestants slamming together will often impede your progress, but the most surprising obstacle is simply landing after a jump. Even if you land fine, your character will still stumble for no apparent reason. Or worse, they might fall and have to get back up. It seems completely up to chance. 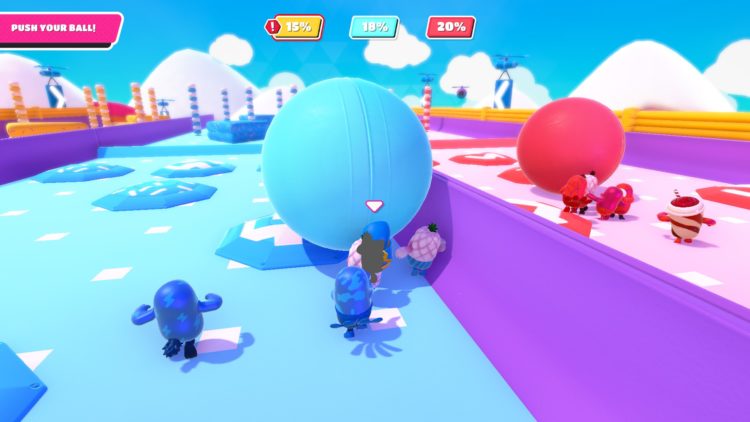 Can you grab the gold?

Whether Fall Guys will win you over is probably going to depend on how you feel about the RNG-versus-skill question. As it’s a silly, zany game show, it’s understandable that you want things to be a certain type of sudden and random. But since it’s also a competitive game, this is going to rub certain players the wrong way. Regardless, Fall Guys is unique, entertaining, and brightly colorful. More round types are set to be added as the game gets updated and I’m sure it’ll only get better from here. I just hope they add a framerate cap, as there’s no reason to have my FPS go up to 300 as this game is wont to do. 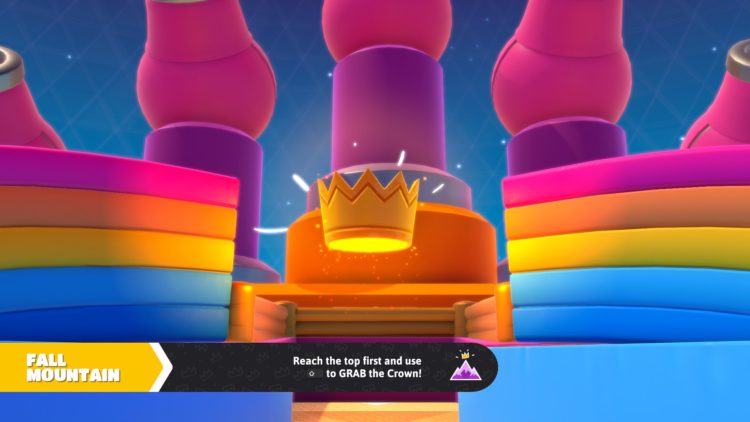 On one hand I really like a lot of what Fall Guys has to offer. It's bright, colorful, zany, and it controls well, but some of the round types are simply obnoxious and the RNG makes each game a crapshoot.