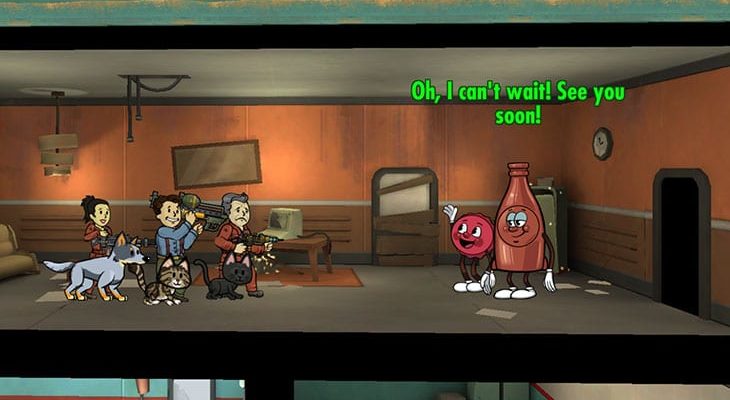 Bethesda’s free mobile/PC crossover game Fallout Shelter has been updated to version 1.7 today, adding new quests and Nuka-World related activities. 1.7 introduces Weekly and Special Event quests, the first of which is based around the upcoming DLC for Fallout 4.

The Nuke-World styled mission will result in theme park mascots Bottle and Cappy appearing inside the vault. They’ll be able to provide you with Nuka-Cola Quantum and bottle caps, respectively.

Weekly quests will appear in Fallout Shelter every Friday, and Special Event or Holiday quests will pop up around relevant periods. The Overseer’s office now has “a ton” of new quests, giving you an excuse to send vault dwellers outside for a spot of exploration and combat experience.

The PC version of Fallout Shelter is only available through Bethesda’s own launcher (yes, another propitiatory store-front, joy!) It is free though (albeit with microtransactions a-plenty). Here are some images from the new 1.7 update.