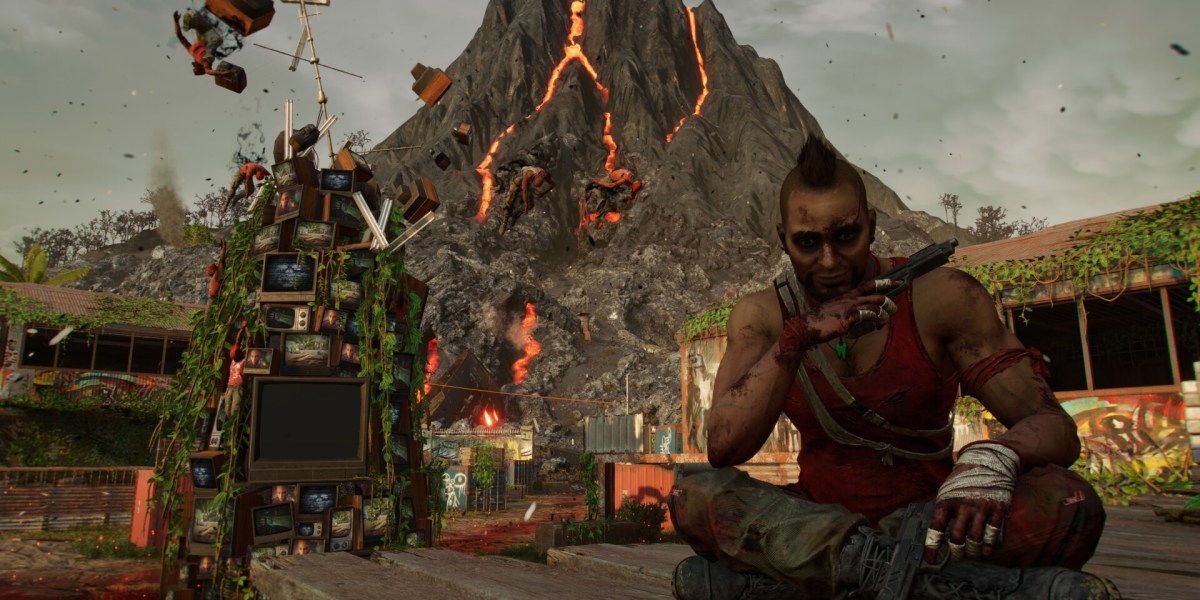 Back in early October, I was able to review Far Cry 6. Combining action-packed sequences, tense moments, and over-the-top humor, it made for an engaging experience. Sadly, I did experience a number of issues from crashes to atrocious AI combatants. Fast forward to the present and we’ve got Far Cry 6 Vaas: Insanity.

Far Cry 6 Vaas: Insanity is the first paid DLC that’s part of the Season Pass. It puts you in the shoes of Far Cry 3′s Vaas Montenegro, long-considered as one of the franchise’s most memorable villains. For the most part, the narrative and voice acting don’t disappoint.

You can start Far Cry 6 Vaas: Insanity by clicking on the Add-Ons button in the main menu. Once you begin, you’ll see a flashback from Vaas’ point of view. Specifically, it shows his death at the hands of Jason Brody (the playable character in Far Cry 3). Vaas slowly succumbs to his injuries, all while his sister, Citra Talugmai, laughs and chides him for his weakness. Vaas then wakes in the “TV room” (i.e., the scene where he died in Far Cry 3). Citra then goads him into proving whether or not he could truly be her “perfect warrior.”

The crux of this story is the relationship between brother and sister (if they could truly be called as such). Vaas is a deeply flawed and broken man. Citra, meanwhile, is the most domineering and manipulative person he’s known. Throw in Jason Brody’s involvement (i.e., Vaas’ own failures haunting him), and you’ve got a recipe for disaster.

Yes, the DLC does try to paint Vaas in a more sympathetic light. Actor Michael Mando once again masterfully embodies the character in such a way that you’ll both hate and root for the character at the same time.

Far Cry 6 Vaas: Insanity leads you on a romp through jungles that would remind you of Rook Island. Some locations will feel familiar to long-time fans. There are tons of references and callbacks to past events, too. At a couple of points, you’ll even hear the “definition of insanity” speech (one of these instances occurs while Vaas is watching a program showing yet another character from a previous game).

Even better, many of these areas are downright trippy and absurd to look at. There are floating sharks, Dr. Earnhardt’s upside-down mirrored house, a ship inside a volcano, ethereal visions, and ghosts chasing you at night. There’s also a spectacular Shining-esque sequence in a hotel that tells you more about the villain’s background. The scenic landscape takes a life of its own given that it’s supposed to encapsulate that person’s memories and beliefs. It’s definitely a treat for those who’ve wanted more information regarding Vaas’ personality and quirks.

Given that “insanity” is part of the DLC’s title, and is a callback to Vaas’ in-game speech and Michael Mando’s audition, throwing rogue-lite gameplay elements is very fitting. After all, the definition of insanity is that you keep doing the same thing over and over, yet you expect that the end result will be different. What could be more apt than rogue-lite mechanics?

Your main goal here is to collect three pieces of the Silver Dragon Blade. These are found in dungeon areas with a lot of enemies, including zombified Jason Brody clones. But, before you do that, you might want to grind first. You’ll trek to ruins and temples, picking up weapons and powers (i.e., passives), as well as eliminating countless hostiles. Your exploits give you cash, allowing you to purchase weapon upgrades and permanent perks. 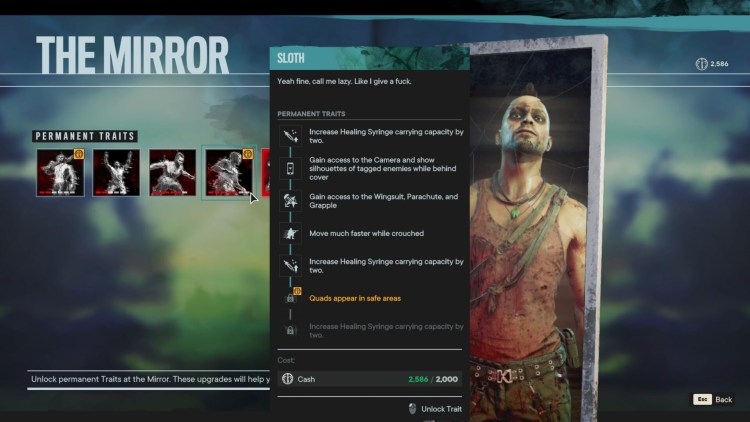 If you manage to reach a safe house and quit the game, you get to keep your stuff (only your mission progress is reset). But, if you die, you’ll lose everything except for the weapon cases that you’ve unlocked. Basically, you’ll need to kill more hostiles, farm more cash, and rebuy everything.

While the concept is good on paper, it’s poorly executed when you consider the player’s time. Even if you don’t die, the “mission progress reset” mechanic will cause headaches. For instance, you can clear the Prison area for one of the blade pieces. But, if you exit the game while inside a safe house, you’ll have to redo that part again. Simply put, you’ll need to ensure that you can clear multiple dungeon areas (and the finale) in one sitting. If you don’t have the time for those activities, then you’ll never clear a run. 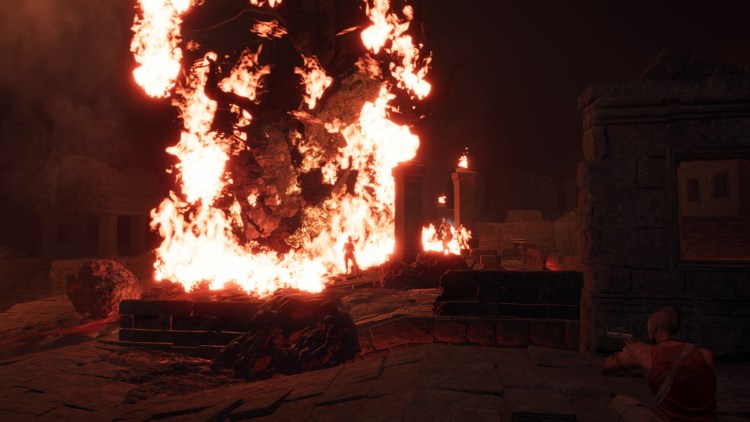 What else can we look forward to?

Perhaps the biggest problem in the Far Cry 6 Vaas: Insanity DLC is that there’s very little to look forward to once you’ve finished your initial run. The default difficulty (or Mind Level) is manageable enough. In fact, all the rewards — such as upgrade perks in the DLC and Vaas’ armor that can be worn by Dani in the main campaign — can be obtained while exploring on Mind Level 1.

If you manage to clear this difficulty mode, then you can increase it further on your next attempt. This provides extra cash rewards, but enemies will just turn into bullet sponges. At best, you can watch a secret ending, though you can just search YouTube for a video of that.

In the end, Far Cry 6 Vaas: Insanity is something you’ll be interested in if you happen to like Vaas’ arc. Moreover, you might like Ubisoft’s creative way of presenting the character’s flaws, quirks, and mindset. Evidently, your first successful run should prove to be exciting. Sadly, past that point, you’ll have almost nothing left to do. 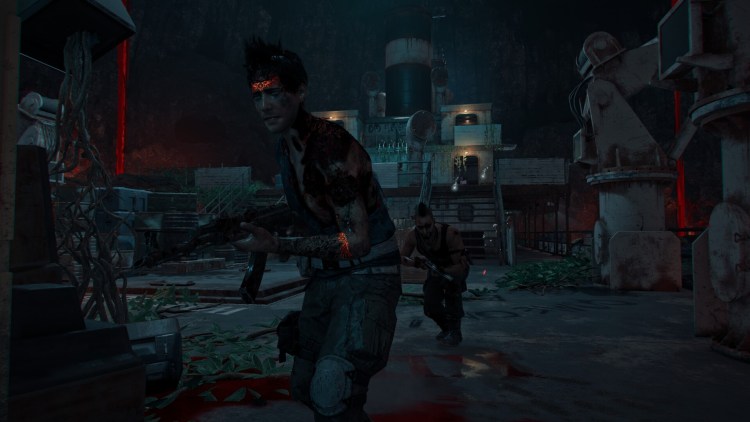 The first Season Pass DLC where you play as Vaas Montenegro, a villain from Far Cry 3.
7.5

Far Cry 6 Vaas: Insanity provides a deeper and more nuanced look at a troubled character. Unfortunately, it has a fairly restrictive rogue-lite system if you're pressed for time. Worse, there's not a lot to look forward to after your initial clear.

Call of Duty: Vanguard review — At least one game mode is good

The next DLC character for Guilty Gear Strive is Happy Chaos