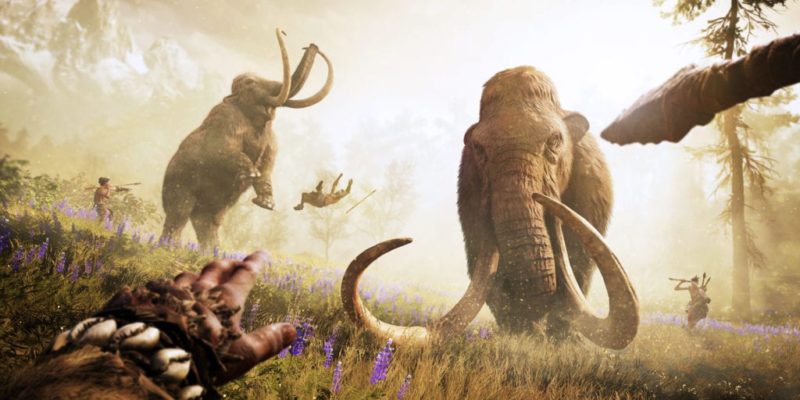 The unbelievable non-tension of Ubisoft pissing about with the world’s slowest pull back camera shot was eventually broken yesterday when IGN Turkey got bored and just leaked that it was leading to Far Cry Primal. Today, that game has got more of a proper ‘reveal’, with a video and everything.

You may remember, back in January of this year, news of a Far Cry based survey being sent around, in which Ubisoft was canvasing opinion on some suggested settings. None of them were quite ‘the Stone Age with mammoths and stuff’, although I do recall one having something to do with dinosaurs (which, true to known history, don’t seem to feature in this game).

Far Cry Primal will be in-keeping with the open world sandbox style of the series, and is described as a “full-fledged” single player game. That suggests a full-priced release, rather than a Blood Dragon style spin-off.

You’ll be playing as Takkar, a final surviving member of an unfortunate hunting group. He’ll be trying to survive, by mastering fire, hunting for food (sorry, mammoths), fending off sabre-toothed cats, crafting weapons (presumably of the Stone Aged melee and bow type), and clashing with other tribes in the land of Oros.

On PC, Far Cry Primal will be released in March. That’s the month after the console releases, for reasons probably best known to Ubisoft. Still, at least that delay has been confirmed up-front.